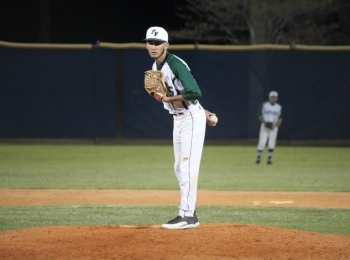 Nicholas Leon pitched six strong innings to earn the win for the Vipers.

As the PAL Tournament continues the Felix Varela Vipers avoided a 0-2 start to their 2015 season with a 3-1 win over the Miami Senior High Stingarees. Both teams counted with good pitching but the team that could make the plays would come out on top. Aggressive baserunning and three unearned runs would give the Vipers the victory in a chilly night at Flamingo Park.

“They read their keys,” Vipers Manager John Barbato said of his baserunners. “They were aggressive and they did what they were taught. Today they were relaxed and played like they’re capable of playing.”

Both pitchers turned in good performances after slow starts but it was Vipers senior, Nick Leon who would come out on top tonight. Leon allowed two straight singles to start of the game, but recovered and that was the most damage he received all night.

“We played the game well,” said Barbato. “We had a great pitching performance from Nick Leon. It’s one of the best games I’ve seen him throw since he’s been with us.”

After the two singles, Leon held the next 12 batters hitless. He finished the game with four strikeouts, three hits and allowed just two walks in six innings of work to get his first win of the season.

“I was hitting my spots, said Leon. “ I just had to keep my composure out there. I knew that I would just get through it. My catcher was calling great pitches tonight and I knew that with him behind the plate I would do well the evening. Also, my defense made some great plays behind me. I’m confident in them.”

The Stingarees would pose a threat during the sixth inning in which they scored one run on a groundout by Chris Rodriguez. They would later leave a runner stranded on third when Leon induced a fly ball to the shortstop.

“I just knew that I had to work inside,” said Leon. “I just tried to jam him and get the ball to the left said of the infield.” 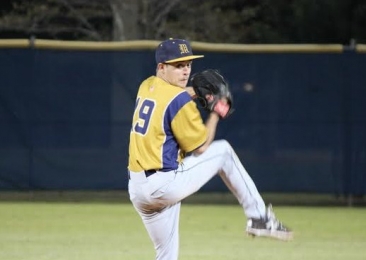 The Stingarees defense was a bit shaky at the beginning of the game, which proved costly. They would allow two runs in the first inning on a fielding mishap with two outs, on a Donovan Bossano grounder that allowed Erickson Canoura and Chris Allende to score.

Mistakes came back to haunt the Stingarees in the fifth inning. After a double by JM Garcia, JC Garcia put the ball in play, forcing another error while allowing Garcia to score from second.

“We have to make the plays,” said Stingarees Manager Frank Suarez. “It’s as simple as that, if you don’t make the plays those thing are going to happen.”

For the Stingarees, junior left-hander Jose Barrios also performed exceptionally well leaving the game after two outs in the sixth inning. He allowed three unearned runs on four hits while striking out five.

“He pitched a great game,” said Suarez. “We just didn’t help him out today.”