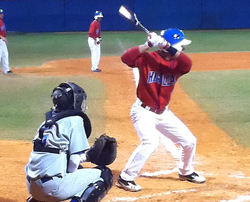 Cody Fulton had a solid game at the plate for Hialeah.

Nester Cortes struck out seven over five innings of two-run ball as the Hialeah Thoroughbreds slipped past the Miami Lakes Trojans 5-3 Monday in both teams’ season opener at Alex Fernandez Field.

Cody Fulton went 2-for-3 with an RBI, Jeff Izquierdo knocked in a run and Henry Perez served up an RBI single for the T-Breds, who survived a few sloppy plays following a tribute to the back-to-back 2001-02 state champs prior to the game.

“It was sloppy, but coach always says, good teams find a way to win,” Fulton said. “Especially with the 2001-02 state champs here, you want to impress them.”

The T-Berds also celebrated their own trip to last year’s district and regional championship by giving members of the team commemorative jackets.

“We were state semi-finalists last year, and we recognize how hard it is to even get to the state championship, let alone win it two years in a row,” Hialeah head coach Michael Fulton said following the game. “So we felt it was important to commemorate that rare accomplishment on their 10-year anniversary.”

Several of the 11 players who went on to play collegiate baseball showed up, including All-Star pitcher Gio Gonzalez of the Washington Nationals. Seven of the 11 college players were drafted and four played in the majors.

Though they could’ve been a little more efficient, the T-Berds did well in front of their special guests. 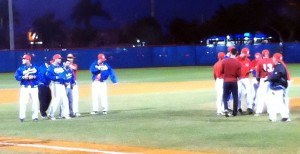 New jackets were given out before the game.

Despite pitching a total of nine varsity innings, junior Cortes looked untouchable at times. His only real struggles came in the second inning with three straight walks, but Cortes settled down and struck out the side after letting two runs score on his error.

“The third baseman and I didn’t do our signs,” said Cortes about the failed pickoff attempt. “After that, I got to my game. I knew what I had to do. I concentrated and threw strikes.”

The Trojans didn’t make things easy for Cortes or closer Bryan Bernal, bringing the go-ahead run to the plate in the final inning.

“I liked that we didn’t give up,” Lakes coach Mario Morffy said. “We’re battling out there, hungry, and that makes me excited about this year’s team.”

The Trojans can bounce back Tuesday in their home opener hosting Westland Hialeah.