The Hialeah Thoroughbreds ran over the North Miami Beach Chargers on Friday afternoon. Though the onslaught came early, there were moments of greatness from the Chargers’ side of the field as well. The District 8A-13 battle ended in five innings.

For North Miami Beach, there would be no way to overcome what Hialeah did in the first inning. Hialeah hit the ball so hard that it didn’t seem as if they were using the new BBCOR bats. 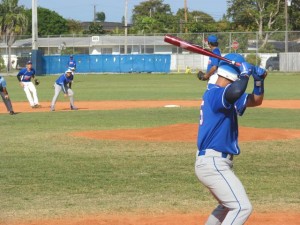 Hialeah racked up eight hits in the first inning alone, four doubles and four singles. They ran the bases well and tacked up eight runs.

Though everybody got a piece early on, it was Nestor Cortes who stood out at the plate. He finished 3-for-3 with three doubles, a sacrifice fly and five RBI.

“Nestor is a baseball kid through and through, but I don’t think he’s gotten a hit in the last two games,” coach Michael Fulton said. “He’s done great for us historically, and he stayed positive (throughout his slump) and it was nice to see him come back.”

Another noteworthy performance at the plate for Hialeah was Lian Roque’s 2-for-2, three-run showing. He scored every time he got to the plate.

Prolific stat lines were not exclusive to the winning side of the field though. The number three and number four batters for North Miami Beach, Leroy Parker and Adrian Pedraza, combined their powers and finished 6-for-6 with three singles, two doubles and a triple. They were responsible for North Miami Beach’s entire offensive output.

Pedraza started on the mound for the Chargers, but he didn’t let that shell shock him at the plate. Parker got on base and Pedraza, knowing very well that Parker might be the fastest player in Miami-Dade County, had the confidence to hit it anywhere. 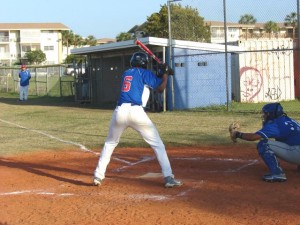 North Miami Beach speedster, Leroy Parker, was a home run shy of hitting for the cycle.

“Leroy and Adrian came around for us big time today,” North Miami Beach coach Jose Lopez said. “Leroy has been there all year, but Adrian really stepped up.”

On the mound, starter Adan Gutierrez provided a solid game for Hialeah, pitching three innings and only giving up one run.

There was very little noteworthy defense, but this was a good sign as both teams played solid. Mauricio Cajuso, a substitute at second base, made an impressive diving catch in the fourth inning to end a North Miami Beach threat, but the story of the game was at the plate.

Also Hialeah, as a result of its early lead, was able to bring in lots of bench players who performed well. Robert Carmona notched a double and two runs onto his team’s count.