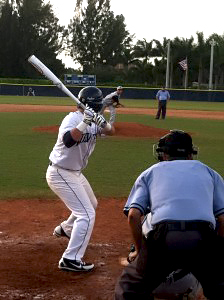 Joey Rodriguez blasted a solo shot for Belen in the win.

Alex Degoti hammered a game-changing, two-run homer in the third inning to give the Wolverines the lead for good, and Joey Rodriguez added a solo shot later in the frame as Belen came back from one run down to mercy rule the Homestead Broncos 15-2 in five innings Thursday afternoon.

David Diaz-Fernandez and Gilberto Delgado each knocked in two runs, and Alec Acosta had an RBI for the Wolverines, who poured on 14 runs in the bottom of the third inning to pull away.

“They looked like they were swinging their bats under water in the beginning,” Belen coach Jerry Albert said about the team’s slow start at the plate. “It was their first home game in two years.”

The Wolverines played elsewhere last year while a net was placed over the right field wall to stop balls from crashing into the adjacent private homes. The initial jitters were expected by Albert, who in his first year with the team has become very impressed with his players’ character and composure.

“This is a great group of kids, terrific kids,” Albert said. “They listen very well. We have a senior-laden group and they totally bought in to everything we’re doing. Their behavior is outstanding, they work hard on the field every single day.”

“We have a couple of kids that have signed to Division I programs, but every time you tell them something, they listen as if they were freshmen trying to make the team.”

The Wolverines overcame the home-opening jitters quickly, drawing an incredible seven walks to go along with two homers and four base hits just in the bottom of the third inning. The offensive outburst was highlighted by Degoti’s two-run blast that made it 3-2.

“My first at-bat, I grounded out to third,” Degoti said. “I kinda rolled over, so the next at-bat I tried to hit the ball to center field and that made me drive it more.”

Though that offensive outburst was clearly important, nearly every one interviewed pointed to something else as the driving factor to the win.

“The biggest thing that happened in this game is William Fabra coming in a tough situation and shutting them down,” Albert said. “We could have easily fell behind 4-1 at home.”

The junior righty came in at the top of the second inning with runners on second and third and just one out. He kept the remainder of the game scoreless.

“I tried my best to come in a settle things down with us down 2-1,” Fabra said. “Just throw strikes, and have confidence in my teammates behind me to get the outs.”

Fabra was able to shut down the Broncos, but Homestead coach Nick Newbury knew it wasn’t for lack of effort from his team.

“I was very pleased (with their effort),” said Newbury about his team’s play. “They are starting to get that fire we’ve been lacking.”

The Broncos had their bright spots, even in a mercy-rule loss, and Newbury remains optimistic despite being faced with a small 15-man roster and two key injuries in a tough district.

“I knew it was going to be tough back in the district, but this is where it’s at,” said Newbury, who coached the team playing independent last season. “My goal, and we’ll see if it comes to fruition, is to make the district playoffs, and I believe we can get there if we put forth the effort.”

Homestead looks to bounce back at Mater Academy Feb. 21.

The Wolverines also face the Mater Academy Lions, but in a quick turnaround Friday.