Mater Academy Lions Put On A Show at Northwestern 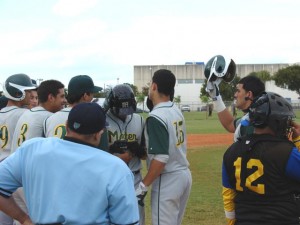 The Mater bench greets Albert Almora after he went deep in the first.

Yes, the Mater Lions defeated the Northwestern Bulls 27-0…but their runs were earned with good at-bats. Yes, Northwestern endured a horrible loss…but it has much to look forward to.

In the first inning, it became apparent there was a disparity between the two ball clubs. Mater appeared to be a well-oiled machine in its prime while Northwestern made baby steps towards a bright future.

The Bulls appeared happy enough to be in their new uniforms, taking their first team picture.

“We haven’t had a program for three years,” coach Joe Simpson said. “Most of these kids aren’t ballplayers yet but in a few years, I guarantee this will be a quality baseball program.”

But Mater went on a tear immediately. Danny Reyes, Juan Carlos Escarra, and Albert Almora contributed hits. Almora came to the plate again later in the inning and hammered in the final nail in the coffin with a scary home run to left-center.

The Northwestern fans collectively gasped at first, but along with Mater fans, cheered for the home run, clearly supporters of exciting play more than anything else.

Almora is touted as a definite major-leaguer and possible first-round draft pick.

“He’s the best player I’ve coached in a while, and I’ve been coaching for 18 years,” Mater assistant coach Alfonso Otero said. “He’s a very excited, emotional player. He’s undoubtedly the hardest worker on our team and our team leader.”

On the defensive side of the field for Mater, there wasn’t much to be done. Starter Leo Dominguez dominated on the mound, only giving up one hit and striking out 10. 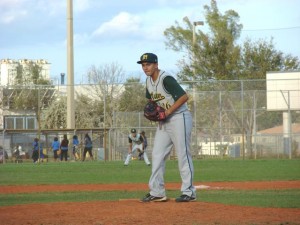 “They’ve seen now what it takes to be a real ball club,” Simpson said. “They’ve seen what hard work and dedication will get you. It’s just a matter of them wanting it enough.”

Mater’s last run came on a loopy but noteworthy play. Joel Luchon hit a bomb to left field, coming up short of the fence, but it bounced around out there so much that he was able to sprint around the diamond for a rare inside-the-park home run.