New District, New Coaches For Many In District 16-6A 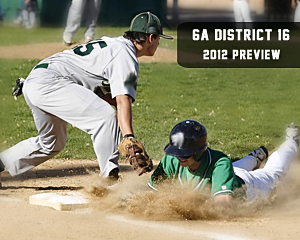 With a realigned district and many new coaches, 6A District 16 is up for grabs in 2012.

After a heartbreaking loss in the district tournament finals last season to Key West, the Belen Jesuit Wolverines are looking forward to getting back to work, this time in the newly aligned District 16-6A.

Belen Jesuit has built a successful program over the years, winning three out of the past five district championships and making two final-four appearances in the playoffs since 2003. But this season they face new challenges with a new coach.

Jerry Albert, who came over from Coral Springs Charter, is looking forward to the opportunity of continuing the winning tradition at Belen.

“I believe a big reason for this team’s success is that these kids are a very close-knit group, and they’ve been playing together since middle school,” Albert said.

But a deeply talented Mater Academy team, led by head coach Eddie Gorriz, also will be positioned well to challenge Belen for the new District 16-6A crown.

“If I could describe this team in one word, it would be talented,” Gorriz said. “We might have the best outfield in the country.”

That may be a bold statement, but it is coming from a team in Mater that has developed quite a few talented kids over the past few years, including two players who are on the Team USA Junior National Squad. Albert Almora, a member of the 18-and-under Team USA roster, was also named Team USA player of the year this past summer.

The district has three more teams entering the season with new head coaches: Hialeah-Miami Lakes‘ Mario Morffy, Miami Central’s Alexander Slaughter and Miami Northwestern’s Joseph Simpson are all first-year coaches at their schools, and they are eager to start the season.

The Miami Northwestern team is especially excited to be playing again as the school has not fielded a baseball team since 2009.

“We have one goal,” Simpson said. “We are trying to instill discipline in these kids. If we can do that, everything else will fall into place.”

Hialeah-Miami Lakes is looking to compete and rebuild its program back to the strong and proud program it once was. Miami Central also is trying to turn its program around and get kids excited to go out there and play baseball.

Westland Hialeah, which is a school that has been in the same district with Belen and Mater for a few years now, will be looking to make a nice run and make it far in the district tournament.

“I have a good group of kids that are relentless, and it’s really going to help us in district games,” Alvarez said.

The Homestead Broncos also will be joining the district. Veteran head coach Nick Newbury has a few returning starters whom he will look upon to become leaders of his team.

Below is a preview of the upcoming season for District 16-6A teams.

“We can build some consistency on the mound. We need to develop four or five kids that can get up there and throw strikes.”

“Our young players play up to their potential quickly. We only have two senior starters. We have some pitching depth, but they must prove themselves under tough competition.”

“Our pitching needs to come through. We have very young pitchers and really need them to step up.”

“We need to keep working hard and are able to find some guys to step up in the outfield.”

Head Coach: Joseph Simpson
Key Returners: Six players who are returning after only playing as freshmen.

“We must become a discipline team. We really need the guys that have played before to come together.”

“Our pitching needs to hold up.”