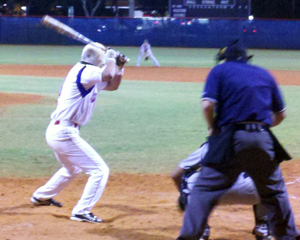 Cody Fulton hit a game-tying home run in the fifth for Hialeah.

Adan Gutierrez dealt four scoreless innings after allowing two runs in the first and Cody Fulton went 2-for-3 with three RBI and a homer as the Hialeah Thoroughbreds stayed undefeated with a 7-2 win over the Reagan Bison on Wednesday.

“The difference in the game for us was about staying focused and playing Hialeah baseball,” Hialeah head coach Shane Fulton said. “That means continuing to do on the field what we work on in practice – getting the runners on, moving them over and getting them in.”

Hialeah fell behind 2-0 early on and had trouble figuring out Reagan starter Raul Cortes, who held a 2-1 lead going into the bottom of the fifth. The only run he had allowed was in the third at the hands of Fulton, who felt he had Cortes figured out as he led off the top of the fifth.

“I noticed, even during warm-ups, (Cortes) had trouble throwing his breaking balls for strikes,” said the younger Fulton, who has emerged under his father’s coaching as one of Hialeah’s biggest bats in his senior season. “So I just sat on the fastball and made sure he didn’t get it past me. If he got it past me, it would be my own fault.”

Cortes had no such luck, as Fulton took him to deep left center on the third pitch of the at-bat to tie the game at 2.

“For me, that was the turning point in the game,” said the elder Fulton about the lead-off homer to start the bottom of the fifth. “At that point, it’s a 0-0 game again and we can settle down and play Hialeah baseball.”

The Thoroughbreds went on to score six runs in the inning, taking the lead on Jonathan Diaz’s bases-loaded walk and never looking back. Nestor Cortes shut the door with two scoreless innings and secured Gutierrez a win in only his second varsity start. 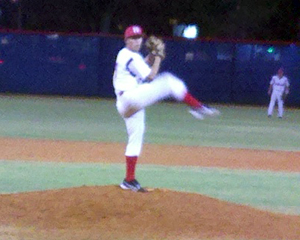 Adan Gutierrez on the mound for Hialeah.

Gutierrez just outlasted the sophomore Cortes, who was making his first varsity start for a depleted ball team missing its number one starter and coming off a marathon match Tuesday night in which it used three pitchers.

“It’s a good thing we got guys out there getting experience,” Reagan head coach Jessy Rodriguez said. “We just came up against a good team. They’re very deep and that’s one thing we are lacking.”

The Bison (4-3-1) look to bounce back at the Nova Titan Classic tournament against West Broward on Saturday.

Hialeah (8-0) looks to stay undefeated as it hosts Miami Senior on Thursday before heading to Archbishop Carroll on Tuesday.