Sabres Secure Another District 4A-16 Victory Over Coral Shores 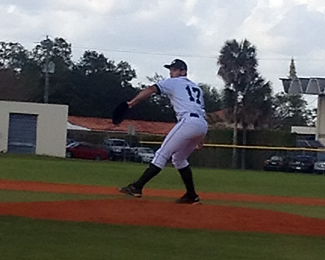 St. Brendan starter Andres Hernandez had a great day on the mound, only allowing one run in the Sabres’ 6-1 win.

The St. Brendan Sabres were able to bounce back nicely after a loss last week with a 6-1 victory over district opponent Coral Shores on Tuesday afternoon.

The Sabres relied on a stellar performance from starting pitcher Andres Hernandez and plenty of singles throughout the game, helping them to jump out to a big lead early on.

Hernandez was in total control for most of the game as he allowed only two hits. In the first four innings, Hernandez faced only 13 hitters and struck out five.

In the first inning, the Sabres got to work quickly at the plate. St. Brendan got four consecutive singles from Nick Pinto, Sly Edwards, Jerry Downs and Miguel Ceballos to drive in a run and load the bases for designated hitter Eric Alvarez. Alvarez worked the count to 3-2 and sent a deep fly ball to center field that allowed Edwards to tag up and score from third to give the Sabres a 2-0 lead over the Hurricanes.

St. Brendan added three more runs to increase its lead to 5-0 in the third. Downs reached first after the Hurricanes first baseman was unable to handle a hard-hit groundball that just got passed him. Two more singles by Ceballos and Alvarez loaded the bases again for the Sabres. Catcher Dayan Cubas was then hit by a pitch and forced in one run. Next up for St. Brendan was Danny Sirven, who put the ball in play, and after a fielder’s choice and a throwing error by the shortstop, was able to drive in two more runs.

In the fifth inning, the Coral Shores Hurricanes looked to get back in the ballgame, remaining patient at the plate and drawing two walks from the Sabres pitcher Hernandez. Then, David Bogue knocked a single to left field to drive in Tyler Hudson to get the Hurricanes on the board.

The Sabres brought in pitcher Andres Ruiz to get the last out in the inning and shutdown Coral Shores’ rally. 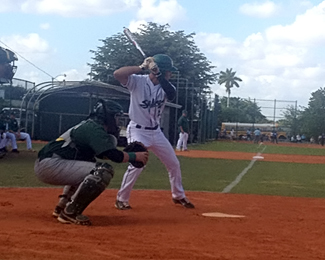 Ceballos came up to bat again in the bottom of the fifth to hit his third single on the afternoon and eventually scored on a ground ball hit to the second baseman by Dayan Cubas. Ceballos went 3-for-3 and scored two runs to help the Sabres pick up another district victory.

“As a team, we were just trying to put the ball in play and have good at-bats,” Ceballos said.”It was a big game for us to get back on track and do the best we can.”

The Hurricanes never quit the entire game. Jordan Izeguirre came in to pitch in the sixth inning and did a nice job shutting down the batters. In the top half of the seventh, Izeguirre led off with a double. After two consecutive walks, it seemed as if Coral Shores was about to make it close. However, St. Brendan brought in George Benedict to close out the game and he was able to sit down the next three batters.

“We had a game last Friday when we were down 5-1 and came back to win the game late, and I think that helped us believe we were always still in the game,” Coral Shores head coach Patrick Meyers said. “We have three home games next week, and we will get back to practice and gear up for those and finish strong.”

“We were able to do some good things today, but now we need to regroup and focus on the next big game for us against Key West,” Wurst said.