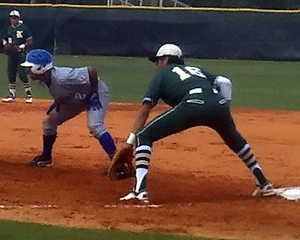 It doesn’t get much better for a high school baseball player than bashing a game-winning, three-run homer in the new Marlins Stadium.

That is, of course, unless that same player delivers a game-winning single the very next day against one of the county’s premier teams. (Editors Note – the next day Mandy Alvarez again had a game-winning hit against district rival South Dade.)

Mandy Alvarez delivered a walk-off RBI single and Jonathan Coven dealt four and two-thirds innings of two-run ball as the Killian Cougars negated a late Hialeah comeback Wednesday to walk off with their fifth win in seven games, 4-3 over the Thoroughbreds.

“We’re really starting to click at the right time,” Killian coach Angel Herrera said. “The thing about this team is that they’re persistent. They experienced hardships early on and really got it together now as the season winds down. Any other team may have just packed it in and folded.

“We put ourselves in the position that we have to win tomorrow. But now, I feel like we’re prepared and can take on anyone.”

The Cougars, who have to defeat South Dade today in order to qualify for the district playoffs, have faced just one team with a losing record over their past seven games. The esteemed competition has forced Killian to elevate its game, outscoring opponents 32-24 over that stretch. They almost coughed it up Wednesday, however, when back-to-back errors in the top of the seventh allowed defending state champ Hialeah to tie the game. A brilliant 6-3 double play ended the inning and set up Killian’s walk-off opportunity.

“Coach always tells us, ‘We’re going to face adversity every game,'” said Alex Fernandez, who finished 2-for-3 with two doubles and a walk. “The team that is able to take it in stride and battle through it is the team that usually wins.”

The Cougars did just that, bouncing back in the bottom of the inning to load the bases for Alvarez with no outs.

“I was just thinking fastball,” Alvarez said about the game-winning at-bat. “I knew (opposing pitcher Michael Rodriguez) was going to start off with fastballs, but we he fell behind in the count, I was able to just sit and wait for the right fastball. He left that last pitch high, and I was able to make solid contact.” 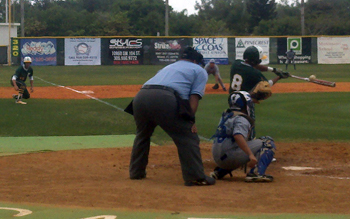 Gil Polanco drove in Spencer Levine from third on this swing.

Erik Molina homered for Killian (13-4-1, 5-4-1 8A-16), and Gil Polanco and Nick Mira each had RBI. Alex Porrua secured the final three outs in the seventh to get the win.

The Thoroughbreds (18-3, 8-0 8A-13) got RBI from Jonathan Diaz, Cody Fulton and Jorge Rey. Adan Gutierrez gave up three runs in five innings and Michael Rodriguez got the loss by coughing up the game-winner.

Despite the loss, Hialeah coach Michael Fulton felt good about the team’s prospects for a second straight state title.

“This is as fundamentally sound and well-coached a team as any we will face,” Fulton said about the Cougars. “It’s good preparation for our district playoffs. We just have to relate to our players a sense of urgency, and I think our chances are great.”