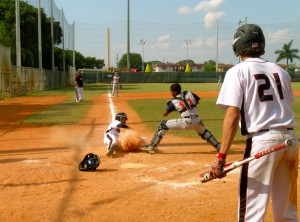 The regular season ended with a bang and not a whimper for the Westland Hialeah Wildcats, who tallied 12 hits en route to a 10-0 win over the Homestead Broncos.

The Broncos struggled all around in part because of missing five starters, including two star players being suspended by head coach Nick Newbury after violating team rules.

The Wildcats improved to 8-5 in 6A District 16, putting them into a tie for third place.

“We came out swinging the bat today,” Westland Hialeah coach Jose Alvarez said. “We were being mentally tough, looking for fastballs, and the hitting was contagious. Everybody started hitting and just put things together.”

The Wildcats attacked the plate early, getting 15 batters to the plate and striking the ball seven times in the first two innings. Jonathan Frias singled in the first inning for the Wildcats’ first hit of the game. Luis Corrales drove in the first run of the day with his chopper falling passed the infield. Daniel Flores followed with a RBI double, bringing in Frias.

Corrales drove in Frias in the second inning with a double to center field, and Flores then singled to bring in another run. Christian Munoz scored Flores for his second RBI with a line drive that passed by the third baseman for a double. The Wildcats led by six after the second inning.

Javier Gonzales pitched all five innings for the Wildcats, recording four strikeouts and giving up just four hits after facing 19 batters. The Wildcats didn’t allow a run all game and left four Broncos stranded on base.

The Wildcats were held scoreless in the third, but they started their biggest hitting spree in the fourth inning. Frias drove in a run with a RBI double, and Corrales followed with a single to left field, bringing in Frias. Flores then drove in Corrales with his third hit of the game for a nine-run lead. Flores finished the day 3-for-3 with two RBI.

“It was my last regular-season game, and I just wanted to hit the ball,” Flores said. “This was the best game I’ve ever had.” 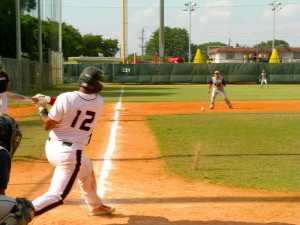 Westland Hialeah led by 10 runs going into the fifth inning, and the Broncos needed to score a run to avoid being mercy-ruled. The Broncos struck back-to-back hits to start the fifth inning, but after a talk at the mound with Alvarez, Wildcats pitcher Gonzales calmed down and struck out the next batter and forced the Broncos leadoff hitter into a double play to end the game.

After the game, the Wildcats won a coin flip to decide the third and fourth seeds in the district. The Wildcats will play in the GMAC tournament starting Monday.

“We were out of it, and we knew we were out of it,” Broncos coach Newbury said. “We would have a pretty competitive district if we didn’t have Belen and Mater in it. We need private schools playing private schools. We’re trying to build something, but it’s difficult when you have South Dade reaching in your back pocket and stealing your players. My kids need to play more and get more experience.”