Belen Jesuit is the team to beat again as it returns 10 players and will be strong in pitching.

Not far behind is Mater Academy, which will be will be doing its best to trump the Wolverines.

“We have a number of kids who are incredibly brilliant in the
classroom.”

The team graduated 12 seniors from last year’s regional semifinal team including pitcher Alex Lavandero who was drafted in the ninth round by the Milwaukee Brewers. But with the talent on this season’s roster, the Wolverines look to reload rather than rebuild.

“We lost a lot of kids,” said coach Jerry Albert. “That’s what happens in high school, they graduate, thats what makes it fun you get a new group every year.”

Coach Jerry Albert will enter his second year as head coach for the Wolverines. He admits his team isn’t battle tested, he still expects great results from his players. “We expect our pitchers to do very well,” said Albert. “We’re a little inexperienced, but they’re fine because they’re smart kids and they learn quickly. 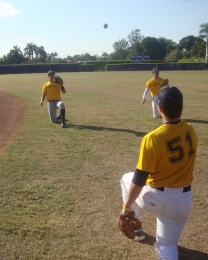 Belen Jesuit looks to make another run at the state finals this season.

Albert mentioned seniors Willie Fabra and Danny Parets along with junior David Villa as his top pitchers this season.

Senior CF Alex Lorenzo who Albert calls “a take charge type of kid” and infielder Elias Monsalve are expected to lead the Wolverines at the plate this season. “We’re going to be a pretty good team, last year we were centered around four Division I prospects, this year we’ll have a more balanced team,” said Lorenzo.

Albert credits his assistant coaches Ivan Montane and Chris Jaile who also serves as a firefighter for developing his players.

“We picked them up last April and they’ve been fantastic additions to the program,” said Albert.

Belen looks to continue its ownership of district 16-6A. The Wolverines finished 12-1 in district play and defeated Hialeah-Miami Lakes 5-1 to capture the district title.

Despite last season’s success, Albert does not use it to motivate his team this season. Instead, he uses a seize the day approach.

“There’s no reason we can’t beat every team we’re playing,” he said. “We just have to accomplish our goal day by day.”

“Hialeah-Miami Lakes has a strong baseball tradition that many have been forgotten. We were four-time state champs and earned a national title in 1985. We’re rebuilding the program and hope to continue to improve on our district runner-up finish last year.”

“We learned a lot about facing the top notch competition and I think it will benefit us a lot this year,” said coach Mario Morffy.

The Trojans season was ended by to three time defending state champion Archbishop McCarthy in the regional semifinal. 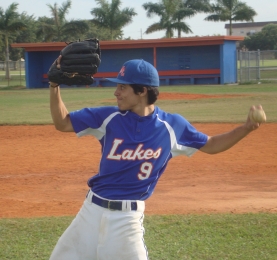 Brandon Morffy looks to lead his team back to the playoffs this season.

“This team’s success is going to rely on its pitching depth and defense,” said Morffy. “We have a solid defense that improved late last season and with a year’s experience I expect us to be one of the top defensive teams in the district.”

On offense the Trojans hope for more power hitting to take some of the pressure off of the pitching staff. “Last year we didn’t have the power or gap hitters to give our pitchers a little more breathing room,” said Morffy.

Besides graduated CF Cris Calderon, the Trojans will return virtually their entire roster from a team that finished 14-10 last season.

Morffy mentioned P Mateo Cuecha, CF Brandon Morffy, C Enrique Cardenas, 1B Mike Uribe, and 2B Fernando Babin as the core of players that will power the team this season.

Most of these players having been playing with each other for the past three seasons since they started together at the junior varsity level.

After tasting success last season, Hialeah Miami-Lakes is eager to prove they belong with the top teams in the area this year.

“We have one goal and one goal only and that’s to be district champs,” said Morffy.

“…We can overcome our differences and play as a team.”

With his team only leading by one run midway through the battle against Hialeah-Miami Lakes, Mater Academy’s J.C. Escarra glanced at the scoreboard in Westland Gardens Park and realized his team might be in trouble.

“I looked to the scoreboard in the fourth inning and we were only up one and I told my teammate, ‘Hey, we got to do something about this, I don’t know how its looking for us,”

Escarra’s doubts were confirmed when the Trojans came back to stun the Lions 3-2 in the district semifinals, putting an end to an otherwise successful season. Mater Academy finished last season 19-5 and featured the sixth overall pick in the Major League Baseball Draft Albert Almora, as their centerpiece in center field. 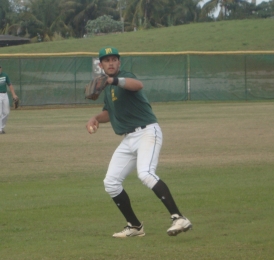 FIU-commit J.C. Escharra, hopes to lead Mater Academy to a deep run in the playoffs.

This season the Lions have reloaded with another group of players hungry to make a deep playoff run. Mater Academy’s own “Big Three”: Willie Abreu (Miami Commit), Kevin Abraham (FAU Commit), and Escarra (FIU Commit) realize what it takes to be a great team.

“We took a lot of things for granted, probably some things we should have done, but we’re going to be alright this year, we have a good mindset and we’re out there to win,” said Abreu.

Mater will bring back a strong one-two punch on the mound with junior left-handed pitcher Mike Mediavilla (Miami Commit) throwing in the upper 80s and sophomore right-handed pitcher Andrew Cabezas.

The challenge for the Lions will be replacing Almora’s production and leadership, as well as breaking in first-year starters in the middle infield.

Despite all the Division I talent on Mater’s roster, the teammates and coaches know that one player can’t win games for them.

In the home dugout at Westland Gardens Park, the Lions players scribbled the message “Hold the Rope” to remind players to trust each other in adverse situations.

New head coach David Dresner has a tall task on his hands in Miami Gardens. Dresner replaced coach Paul Williams in November and is charged with the tall task of rebuilding the baseball program at Norland.

The Vikings finished 2-12 last season and haven’t sniffed the playoffs since 2008. 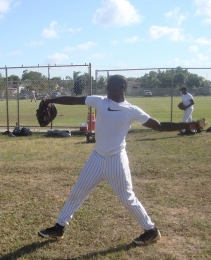 Sensi Jarvis warms up during practice at Norland High.

“We’re trying to stabilize this team and build a program, not just a one year team,” said Dresner. With the popularity of football and basketball at the school, the challenge is to bring those same athletes to try out for baseball.

The Vikings have a roster filled with speed and athleticism, however many of their players don’t have much baseball experience.

Senior left-hander James McKinney, a defensive end on the football squad, will provide the power in the batting order. Senior Sensi Jarvis is another lefty who will pitch and play first base for Norland. DeShawn Simpkins, a cornerback for the football team and Rashad Fenton will start in the outfield. Both players give the Vikings plenty of speed on the bases.

“Small ball baseball will win games for us,” said Dresner. “I plan to lead the county in steals this season.”

Despite the obstacles that face his team this season the goal is reach .500 this season. Dresner draws motivation from a 1989 Tom Petty song that was released before any of his players were born.

“Our team motto this year is ‘Won’t back down’.”

“This is our fourth year of existing. We are building this program into a contender program in Miami-Dade County. We just built new batting cages at the school with bullpens. We are getting a new field next year. Slowly
but surely we are building a real good program on the northeast side of Miami.”

“Our goal is to get in the district playoffs since its our first year in district play,” said coach Edwin Bonilla.

Bonilla believes the strengths of his team are defense and pitching. Although they don’t have much power at the plate, his team will rely on “small ball” to manufacture runs this season.

The core of this team is made up of mostly juniors and sophomores. Six foot, three inch pitcher Chris Contreras will return as the ace of the pitching staff. “He’s throwing mid 80s and if he controls it and hits his spots he could be real productive this year,” said Bonilla. 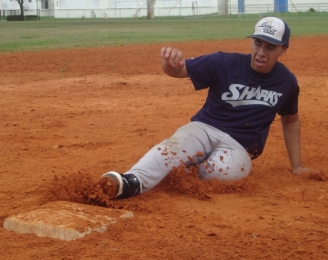 The Mourning Sharks will begin their first season of district play.

Junior infielder Alex Vallejo, junior 1B Andrew Feldman, and senior Ethan Cohen will be the leaders on the team this season.

“Its all about making a name for ourselves because nobody knows about little Alonzo & Tracy Mourning,” said Vallejo. “We are definitely looking forward to surprising people coming up in districts.”

For the Sharks being a new school does have its disadvantages as well. With a shortage of space around its campus,the team does not have its own facilities and lacks a true home-field advantage. The team plays its “home” games just over six miles away at Claude Pepper Park in North Miami. They hold practice at nearby Allen Park, and they school recently installed batting cages on campus so now the team doesn’t have to leave campus to take batting practice.

“The joke at our school is that we’re going ‘away’ for home games and practice,” said Bonilla.

No matter where they take the field, the Sharks will look to sneak up on teams and make the district playoffs.

Westland Hialeah coach Jose Alvarez guided his team into the playoffs after tying for 3rd place with HML in the district. The Wildcats lost to eventual district champion Belen Jesuit in the district semifinal.

The challenge for his team this season will be to compete for a top four seed in the district despite lacking the depth that other rivals have.

“We’re not very deep, between JV and varsity we only have about 25 guys,” said Alvarez. 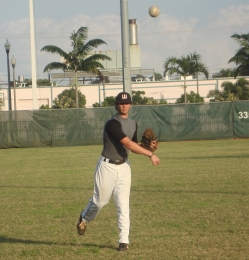 Christian Munoz throws a baseball during practice at Walker Park in Hialeah.

The Wildcats success this season will depend on the play of guys like C Luis Corrales, SS Christian Munoz, P Carlos Adesma, 2B Frankie Morejon, and CF Mizael Alvarez.

“I worked all summer getting better at everything, even the things I know I can do well,” said Corrales.

Alvarez is excited about his returning players in the infield, but noted pitching is an area of concern.

“Our catching and infield should be solid, pitching wise, it’s hit or miss,” said Alvarez.

The challenge for the Wildcats will be to defeat the top dogs in the district. Westland went 9-1 against teams that finished in third place or lower in the district, but combined to go 0-4 against Belen and Mater Academy, the top two seeds last season.

For a school in only its fifth year of existence, Westland Hialeah is still trying to make a name for itself in baseball.

“You say the name Westland, some people ask you, ‘Who?’,” said Corrales.

If the team can continue to compete in its district and beyond, other teams will get acquainted with the Wildcats this season.