District 8A-13 Preview: All Eyes On Hialeah Gardens

Hialeah Gardens might have surprised many teams last season by stunning Hialeah in the district final, but this season, the Gladiators know they will be on the radar.

Meanwhile, Hialeah will be working hard to not be disappointed again in district play. The T-Breds certainly will have to contend with their tough district foes to advance to regionals.

“…our pitching does what its suppose to do.”

Of all the teams in the district, the American Patriots might be the most well balanced on paper, according to Manager Ricky Gutierrez.

“We can hit for power. We can hit for contact. We have a lot of speed. And we have a great defense,” said Gutierrez, who has been the coach at American for the past five seasons. “This is the best group I’ve had as far as personnel since I’ve been here.”

Senior Kendrick Gutierrez, a 6-foot-4-inch mountain of a first baseman, will be the big bat in the lineup. The coach’s son looked up to former star first baseman Frank Thomas growing up as a kid.

Sophomore third baseman Roman Gonzalez, who led the team in RBIs and extra base hits as a freshman, is another dangerous hitter in the lineup.

“He’s a sophomore now but in a couple years, you’re going to be hearing his name a lot as a senior,” Gutierrez said.

Gutierrez also will rely on seniors Kevin Peraza and Samuel Candanoza to be leaders on this team.

Despite all the returning talent, the team will miss catcher Chucky Vasquez in the batting order. Vasquez hit .457, with three home runs and 16 RBIs last season. 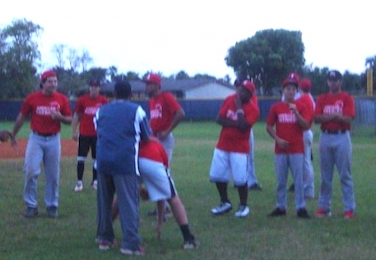 Players joke around after practice at American High School.

The biggest addition to the team may have came gift-wrapped from a district rival. Pitcher/outfielder Ronnie Williams transferred to American from Dr. Krop in the offseason, and he gives the Patriots another quality arm on the mound. Williams throws in the mid- to upper-80s and provides Coach Gutierrez with speed and athleticism on the diamond.

“If those guys have good years, the sky is the limit for us,” Gutierrez said.

Even though the goal is always to win the district, coach is telling his team is to take a “one game at a time” approach to the season.

“We want to take it one game at a time but our expectation is to go to districts,” said Candanoza.

American plays another challenging schedule this season and they will battle with Hialeah and Hialeah Gardens for the district title.

“Those are the two teams we have to go out and beat this year,” said Gutierrez. “We look good on paper, but you still have to play the game.”

The Dr. Krop Lightning are coming off a season filled with close losses. The team lost lost six games by one run each. The challenge for coach Jason Sullivan will be to replace six seniors and turn some of those close losses into wins.

“A couple breaks from last year and who knows we might have won a couple of those games,” Sullivan said. “I expect us to be in some of those big ball games this year.”

The Lightning will be led by a tight-knit blend of seniors and underclassmen. Dr. Krop does not have a big bat who can consistently hit home runs, so the Lightning pride themselves on playing small ball and working on the fundamentals. 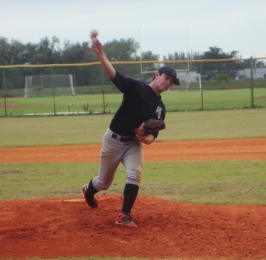 The Lightning will have to do without junior shortstop/pitcher Ronnie Williams, who transferred to district rival American in the offseason.

After losing a number of close games last season, the players feel they understand what it takes to win.

“We have to be a scrappy team,” Norman said. “We don’t have a lot of guys that are going to come out here and hit three or four home runs.”

Coach Sullivan drills that scrappy mentality by having the team go over bunt situations in practice.

“Doing the little things like bunting and base running are whats going to help us win games,” said Murillo.

The Lightning will put those fundamentals to the test against Coral Springs Charter in their season opener.

“The great strides we have made in four years since starting a baseball program. Currently we have placed 10 former players in colleges and won our tough district last season in just four short years. Unlike the private and charter schools, we can’t just go out and recruit players and bring kids in. We had to do it the hard way!”

Coach Tino Burgos has found his team in unfamiliar territory this season. The team has gone from the hunter to the hunted after stunning Hialeah to win the district championship. As one of the newer schools in Miami-Dade, the Gladiators were fighting to make a name for themselves in the county. However, after winning their first district title, Burgos realizes that won’t be the case this time around.

“I think last year we kind of snuck up on people, so I think this year, the Hialeahs and the Americans, they’re going to be ready,” Burgos said.

Coaches usually speak about how their players need to develop a camaraderie to be successful. Burgos believes the strength of this team will be how quickly they have grown as a unit.

Trust and some good returning talent will make Hialeah Gardens a dangerous team again this season. 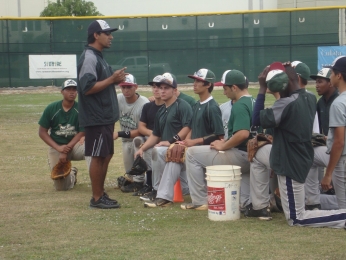 The player gaining the most attention is senior outfielder David Lara, who is committed to Marshall.

“It’s pretty much his team now,” Burgos said. “I can see him getting drafted easily in the top 20 rounds.”

Lara has worked on all aspects of his game to become the leader of the team.

“I’ve worked really hard this summer to show people what I’ve got this season,” Lara said.

Junior Alejandro Piedra will return at first base, senior Peter Rodriguez will start in center field, and Chris Suarez will return to anchor the pitching staff throwing in the mid-80s.

Freshman shortstop Arthur Cordoves and pitcher Jeremy Garcia, whom Burgos calls “complete a players as you will find as freshmen,” are expected to contribute immediately to a team that graduated 10 seniors from last season.

“I think we have enough pitching, and I think we’re strong enough offensively to where we should compete again in our district again this season,” Burgos said. “If our guys are able to overcome the hype that goes with winning, we should be alright. If they can’t then we will have an early exit out of the playoffs.”

For most baseball teams, just making it to the playoffs is something to hang your hat on. For Hialeah High, anything short of a state title run is a disappointment. That’s why the 1-0 loss to Columbus in the regional final has the T-Breds playing with a chip on their shoulder this season.

“It was a tough loss and it did leave a sour taste in our mouths, so we feel this year that we have unfinished business,” associate head coach Jonathan Hernandez said. “Guys were in tears because even though we did well, the season was a failure because we did not win the state title.”

The T-Breds are a tight-knit team whose state title hopes will rest on their pitching staff, which will be one of the best in Miami-Dade County this season. Senior Nestor Cortes — the 2012 HSBN Miami Pitcher Of the Year — junior Alexis Herrera and sophomore Michael Rodriguez will anchor the staff.

“Coach just preaches one team, one goal, one heartbeat,” Cortes said. “Hialeah has a tradition of being a family, and our goal is to win states.”

The left-handed Cortes, who is committed to FIU, finished last season with an 8-0 record, 69 strikeouts and a 1.51 ERA. 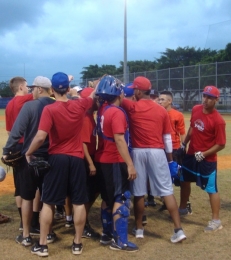 Hialeah players huddle together after the end of practice at Alex Fernandez Field.

If anything prevents this team from making a title run, its going to be its hitting. The team lost six seniors from last year, and the biggest loss may have been outfielder and current Florida Gator Cody Fulton, who hit .422, with three home runs and 25 RBIs last season.

“We lost a couple key pieces and we trying to fill in those spots a little bit, but I still have high hopes for this team,” Herrera said.

The team will rely the experience of players like senior shortstop Alian Silva, while some new faces will contribute as well. Arnaldo Brito, a 6-foot-2 freshman, will step in to start at third base this season for Hialeah.

“Our team is really strong on the mound and we’ll have defense,” Cortes said. “Our hitting will come around.”

The team also has something to prove in the district as well. Although they finished 8-0 in district play during the regular season, the T-Breds were stunned by Hialeah Gardens in the seventh inning of the district championship game last year.

“They took what we feel was our district championship away,” Hernandez said.

Hernandez believes his squad will be successful if it buys into the team concept of “One team, one goal, and one heartbeat.”

“Its one team which is the Hialeah T-Breds, we have one heartbeat which is everybody on the same goal, and obviously our one goal is to win a state title.”


The North Miami Beach Chargers did not have to look far to find a new head coach. Alex Rodriguez will replace Jose Lopez at the helm after spending the last five seasons as an assistant for NMB.

Despite having a new man running the program, the Chargers will have a lot of familiar faces taking the field in North Miami Beach. The 2013 Chargers will return seven starters from last season.

“A lot of these guys have been starting since their freshman and sophomore years so we’re expecting good things from them,” Rodriguez said. “The good thing about having these guys is that they know the game because of their experience.”

Rodriguez believes his best players will be in the middle of the field. 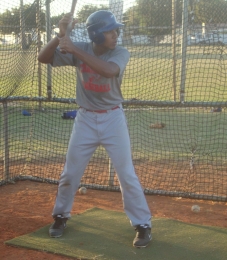 The Chargers will have four-year starter Leroy Parker back in centerfield when he gets we he is done making plays for the football team. Three-year starter Alejandro Suarez will double as a shortstop and ace of the pitching staff. Adryan Pedraza is another four-year starter and captain at catcher for North Miami Beach.

Despite all the returning players, Rodriguez did make room for a new face in the infield. Manuel Mattos will see time all around the infield in his first season from the Dominican Republic. Rodriguez will plug Mattos in at almost every position in the infield.

“He’s quick, he’s got good hands and he plays almost every position like me,” said Suarez. Rodriguez will play Mattos at shortstop, third base, catcher and pitcher this season.

The challenge for NMB will be to win more games in a competitive district. The Chargers finished 8-12 overall but managed only a 1-7 record in district play.

“We have to win more within the district,” Rodriguez said. “There were a couple games we let get away in district play.”

“While the record may not show it we’ll be better prepared for some of the tougher competition in district,” he said.