Champagnat Comes Back To Force 7-7 Tie With Highlands Christian 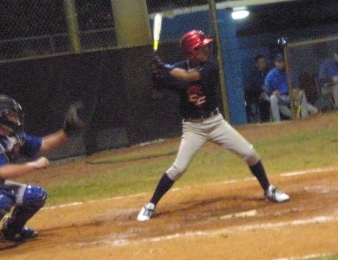 Champagnat’s Anthony DeJesus bats in the second inning of the team’s 7-7 tie with Highlands Christian.

One of the least likely occurrences in the game of baseball is the game ending in a tie.

But in the preseason, anything is possible.

Miguel Fonseca sent the tying run home after being hit with a pitch in a bases-loaded at-bat in the bottom of the seventh. It was the third time in the inning that a Knights pitcher hit a Lions batter.

Although trailing for much of the game, the Lions continued to chip away in mounting the late comeback by scoring in each of the final three frames. It was their grit and tenacity that most pleased their manager, Enrique Avila.

“We’re a very young team, so chemistry is going to be very big for us,” Avila said. “They got their butterflies out tonight. But as long as they keep playing the way they finished this game they’ll be competitive.”

Early on it was the Knights doing all of the damage.

Kirvin Moesquit drew a leadoff walk and Joe Ortiz slapped the ball into shallow right field to put runners on the corner to start the top of the first inning. Moesquit came in on a passed ball, and two batters later Deion Rosalia crushed an offering from Lions starter Abrahm Figueira deep over the centerfield fence for a two-run home run and a 3-0 lead.

“I see our team and I see a good club,” Highlands manager Bruce Charlebois said. “We’re going to be a nice team and our young guys will come out really well. Preseason is important to get some of the kinks out. There is a measure of some excitement and some nervousness, and you get to get those bugs out with these first few games.”

Highlands added to its lead in the second, as catcher Sean Cronin walked leading off and then stole second to put himself in scoring position. This time it was Moesquit delivering a shot to deep center field that easily sent Cronin across the plate and Moesquit on second.

But a strong throw from center fielder Nosomy Diaz helped pick off a Knights baserunner at third base to end the inning. 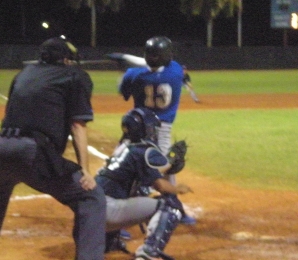 Highlands’ Deion Rosalia was 2-for-4 with a home run and three RBIs in the Knights’ 7-7 tie with Champagnat.

Diaz was a sparkplug for the Lions throughout the night, while also recording the team’s first hit in the bottom of the fifth inning when he was able to leg out an infield single. Christian Sanchez then pushed Diaz home when he connected on a pitch to deep right-center field for a standup double.

Champagnat tacked on three more runs in the sixth inning to come roaring back. Miguel Fonseca found a hole in the left-center field gap to score Sandy Valdez, after Valdez had drawn a one-out walk. Alejandro Vitre followed with a blooper in shallow right field that scored Alexander Martinez and Fonseca.

Even as the game grew closer again late, neither manager made any adjustments from their preseason plan that involved getting a look at their pitching depth.

Lions starter Abrahm Figueira was given an opportunity to pitch deep into the game, and in fact wanted to stay in despite having thrown 87 pitches when he was finally relieved.

“We wanted to see what he brought, and we wanted to see how far he can really take us,” Avila explained. “This is my first year coaching him, and after him is all freshmen and sophomores, so we’re going to ride him pretty good this year.”