District 4A-15 Preview: Up For Grabs

This is one of those districts that’s wide open. LaSalle heads the group.

“We practice on a football field many times. Hard to put practices together that way, but we make no excuses around here.

In 2007, the LaSalle Royals advanced to the 3A regional finals.

This season, veteran manager Oscar Benitez thinks he as the talent to at least repeat that run.

“We have the deepest pitching staff we’ve ever had and almost everybody is back,” said Benitez, who only lost catcher Jonathan Cata (Flagler College). “We want to win the district and catch some momentum going into that key home regional quarterfinal.”

Last year, LaSalle fell at the first stage to St. Brendan and have only got to the regional semifinals once since 1974.

Leading the way for the Royals in their 2013 quest will be senior Elier Rodriguez, the 2012 4A-15 Player of the Year, who has put on 15 pounds of muscle and is returning to his natural catching position.

OF Yordan Piedra will provide a solid bat and speed, while SS Nick Canino, who is being looked at by SEC and Big 12 programs, brings superb defense and is also very useful at the plate.

On the pitching side, ace Mike Mathies has recovered from the arm injury that saw him miss the end of last season, and No. 2 Brent Thomas is expected to contribute heavily.

“We didn’t have a lot of two-out, clutch hitting last year,” said Benitez, whose team will play at Marlins Stadium and in New Jersey against Don Bosco Prep this season. “Experience will help, as well as doing the basics better.”

“Our team is a work in progress. This is just my second year and we are building it. Trying to make it a top school in Dade County in years to come. It’s all a process. You have to crawl before you walk as the
say. I have a lot of young players and learning how to play the game
correctly. I have a very committed staff that put countless of hours
trying to build this program.” 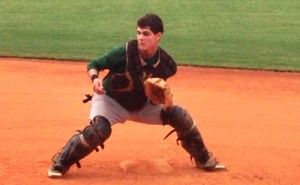 Coming off a two-win season, second-year coach Steven Suarez’s only goal for his Ransom Everglades Raiders in 2013 is to improve.

“I just want to win more than two games,” said Suarez. “We’re young, and it will go game-by-game. They’re going to make mistakes. One day we can look amazing, but the next day, well, the younger kids just aren’t as consistent at the older ones.”

With only two seniors and two juniors at his disposal, Suarez is looking to his 10 underclassmen to help out from day one. Sophomore catcher David Lanster and sophomore pitchers Royevan Armas and Chris Rossi will be expected to play solid roles.

“Our district is tough,” said Suarez. “With the cost of my school, I can’t bring in kids like some of the other teams. I just have to develop what I have.”

“…we grow up as the season goes on and become a competitive team.”

As only a second-year program from a non-traditional school, the TERRA Institute Wolves might be overlooked by some teams in 2013.

Manager Hernan Adames is encouraging them not to do that.

“We won some tournaments this summer and every starter is returning,” said Adames. “With a year under our belts, we have improved tremendously.”

Reuben Pino, who led the team in all major offensive categories last season, returns for his junior campaign, while sophomore Tyler Pritchard (.385 in ’12) will be looked upon to provide a solid amount of offense as well.

On the mound, sophomore Alexis Valladares has recovered from an arm issue that saw him shut down in 2012, while freshman Andres Perez is also expected to be a key starter.

“The nucleus of team is ready now, as opposed to last year in their first as varsity players,” said the enthusiastic Adames. “If we play the game we’re capable of, we will we sneak up on people.”

No information supplied by Doral Academy.