District 4A-16 Preview: A Three-Way Battle

Gulliver Prep and St. Brendan head this district, but Key West hopes its tradition will help it succeed and take the division title.

The Gulliver Prep Raiders will begin the season eight seniors down. Surprisingly, the lack of experience on this team will probably not effect their competitiveness. 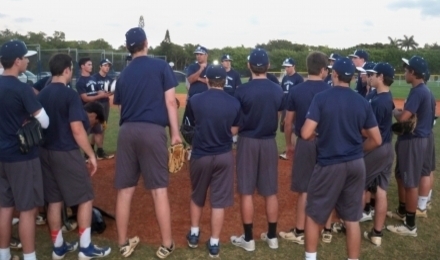 Manager Javier Rodriguez feels that although most of their roster does not have experience starting in a varsity game — only three have started consistently on varsity — they’ve played enough summer and fall ball to be competition ready, with their goal being the same as it is each year: Go to state and win.

To get to state, they’ll need to come together as a team. Leading the Raiders is shortstop Joe Dunand, a member of the USA 17U team who will prove a valuable asset.

Center fielder Henry Hernandez is expected to bring some leadership as well. Hernandez has been starting for four years and has the speed and the arm to make him a Division I contender. A notable addition to this team is Brent Diaz, an outfielder from Columbus, who is a power hitter and will be an overall good addition to lineup.

Gulliver’s pitching staff is also expected to contribute to the Raider’s success this season, led by seniors Bobby Lopez and Luke De la Cruz. Gulliver also has a solid sophomore class in development. Half of the pitching staff moved up from JV and Rodriguez feels they can eventually pitch at the D1 level.

“… we continue to work hard and have the mindset that every day is an opportunity to get better.”

The Key West Conchs have a challenge each season, one that’s not often thought about: location. The team travels as much, if not more than, any other in the state. A minimum bus ride of three hours is required to play games. Other teams may make a trip once a year, but for them, it’s once a week. Although it can be exhausting to have to manage six hours of travel and their already packed schedules, this challenge only motivates them and helps build camaraderie within the team.

The Conchs’ goal this year is to be the best team it can be and to get better every game. Coach Miguel Menendez says,

“We haven’t put a number or a cap on what we hope to accomplish other than we want to play better at the end than we do at the beginning…as long as we do that, than it doesn’t matter how far we go, we will have been successful,” Manager Miguel Menendez said.

This club has a lot of talent to help them be successful. Chris Garcia will be the number one pitcher and he has great stuff. He has a chance to have an extraordinary senior year and is the only senior on the team.

Darren Miller will be the number two pitcher and play shortstop. He is only a junior, but he has already committed to FSU and has a chance to be one of the best to ever come out of Key West. Center fielder Steven Wells is a junior who has started the last two years and provides outstanding defense in center field. Wells will hit at the top of the lineup this year.

Key West also has some newcomers to spice things up. Pitcher Gregory Veliz is a talented freshman who will play shortstop and second base, plus pitch. He swings it well from the left side and has a chance to be a special player.

Sophomore Marcus Brisson will play in the outfield, and he is another lefty who swings it well and can provide some power in the middle of the lineup.

Looking at the roster, it is clear that pitching will be a strength for the Conchs. They have five guys who can all be outstanding high school pitchers. Another strength is that the team will be intact next year as well with only one senior. Although they are young this year, they have the talent to be very competitive over the next few years.

“We are a hard-working, scrappy, yet very humble team, eager to
compete and hopefully establish ourselves as one of the best programs
in South Florida.”

The defending district champion St. Brendan Sabres are looking for a repeat of last season, but they’ll have their work cut out for them, going against district rival Gulliver Prep. If the Sabres can cling to their district title, they hope to move on to states.

The St. Brendan team already has met some of its goals for the season, with good grades and college exposure on Manager Joe Cuba’s priority list. On the field, the team will work to play together as unit and stay healthy.

Returning for their last season are seniors Miguel Ceballos and Jose Carrea. The heart and soul of the Sabres team, shortstop Ceballos and second baseman Carrera were an integral part of last year’s winning season. Ceballos has signed with Virginia Tech and Carrea with Manhattan College.

The Sabres have several newcomers this year who they hope will make significant contributions to the team. 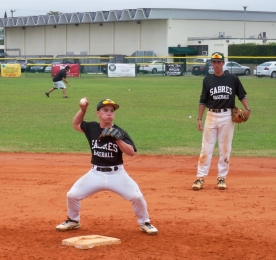 Jose Carrea receives a ground ball at second base.

Catcher Danny “Rookie” Survin is a junior who also plays first base and swings the bat well. He played in some crucial games last year and they are looking at him to contribute and perform positively towards the team at a higher level this year.

Although the Sabres have not designated a number one starting pitcher as of yet, they have some strong candidates. They have high expectations for lefty David Plotkin who pitched well in fall and has had an outstanding spring practice.

Oscar Gordillo, a transfer from Archbishop Carroll, is predicted to have a large impact on the team as he can play infield, hit and pitch. Other noteworthy members of their bullpen are Jorge Lara, who is a transfer from Braddock, and
Matt Diaz, who is coming back from Tommy John surgery and is said to be throwing very well.

The Sabre defense is also looking solid with Archbishop Carol transfer Dennis Rivadineira, who has strong ability. He has starting potential as a junior. Center fielder Gershin Sotolongo will be a catalyst to the team with his speed, pop in bat and solid defense.

One of the strengths of this team is its depth. They have depth in pretty much every position, in infield and outfield, and have quality arms that still to be tested and proven. Although the Sabres have the talent to retain their championship, Cubas knows that “you can’t disregard anyone.”

No information received from Coral Shores.