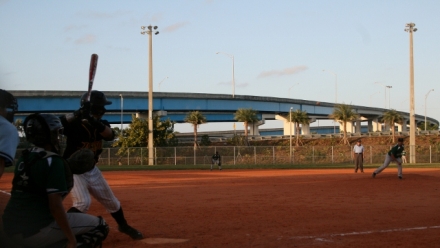 The Miami Jackson Generals got off to a solid start to the year by giving their young manager his first win as they cruised past the Miami Central Rockets 17-0 on Monday.

The Generals scored eight runs in the first and six in the second en route to the victory.

“We’re rebuilding, but we feel like we’re already somewhere at the top,” Manger Julio Mendoza, who is the youngest head coach in the county at age 21. “We feel like we’re a regional caliber team, so those are the results that are expected, and that’s what happened today.”

Although the Rockets’ pitching was a little wild, they managed to slow the Generals after the second inning when Miami Central Manager Andres Cerratl switched their lefty for right-handed pitcher Jason Dubon, who finished the third inning quickly with one strikeout and two assists from his infielders.

“We knew what we were coming in for,” Cerratl said. “Jackson was a playoff team last year. We just went into a stretch in the first inning where we were walking guys straight in a row.”

Bryan Rodriguez, the starting pitcher for Miami Jackson, pitched well with four strikeouts and two assists for the two innings he threw.

With the large lead, Mendoza called on Yoilan Hernandez from the bullpen and had him continue the onslaught on the plate. Hernandez finished the inning with a solid three strikeouts.

Juan Patricio’s triple in the fourth inning brought in Aramis Montenegro and Jomilson Alvarez for the final runs.