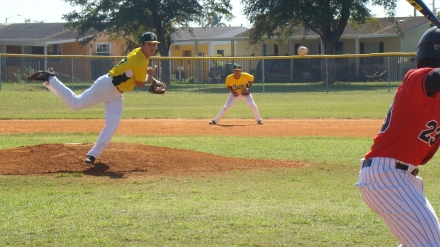 Miami Brito got contributions up and down its lineup Thursday as the Panthers did well with a cornerstone of their team — execution — to defeat Dade Christian 8-0 in a game played at Miami Christian.

In addition to the balanced offense, the Panthers got a strong performance from ace Richard Sotolongo, who pitched five innings and gave up four hits.

“My fastball was on, and I was hitting my spots pretty good,” Sotolongo said. “I was able to set up with the curve ball and get it in over the plate when I needed it to to help me stabilize the game.”

The Panthers (8-1) set a tone early in the game, scoring four runs in the second on the strength of hits from Juan Carlos Millan, Edberg Dominguez, Julio Gonzalez and Savian Fernandez. Dominguez doubled home Josuan Suarez and Millan, and Dominguez scored on Fernandez’s base hit.

“We’re always practicing that,” Gonzalez said. “In clutch situations, it’s always going to help us. Maybe we’re not hitting that day, and that trick play can help us score a run to win the game.”

Sotolongo, who improved to 4-0, said seeing his team take the lead benefited his performance. 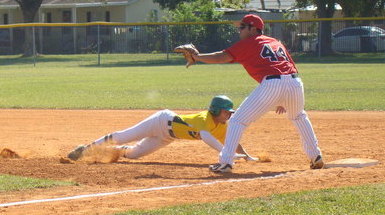 Julio Gonzalez slides back into first base. He finished the day 2-for-2 with two runs.

“He’s been good all year, so we kind of expected that from him today,” Fundora said. “He mixed up his pitches well, and he battled threw the ballgame. Pretty much a very good performance.”

Gilbert Gil hit an RBI double to bring home Gonzalez in the third to extend the lead to 5-0.

Brito went up by another run in the sixth when the Crusaders center fielder couldn’t handle Marco Bolano’s well-hit ball. Fernandez, who reached on a walk, came in on the play.

Gil scored in the fifth on Suarez’s double, and the Dade Christian outfield couldn’t catch Millan’s pop-up, allowing him to reach second and Suarez to score.

Dade Christian Manager Reggie Rodriguez said the few mistakes by his team prevented the game from being as close as it could have been, he said.

“Brito is a very solid team, one of the best teams in the county I’ve seen so far,” Rodriguez said. “They play solid defense. They threw their ace on the hill today. He threw a solid game. We had a couple of innings there where we came up with some errors and that pretty much was the changing factor in the game. Two or three errors led to about four or five runs, so obviously they played a great game, but if we eliminate those errors, it would have been a lot closer than it was at the end.”

Rodriguez said the a positive he saw in his team’s performance Thursday was its pitching.

“[Starter] Anthony Munoz, he threw solid even though he probably gave up four earned runs or so,” Rodriguez said. “But he threw a solid game, hitting his spots, good fastball, good little curve ball. Alex Perera closed it out. He’s usually our closer. He threw one good inning today. It’s a positive right now, the pitching. We’re going to keep working hard and get through it.”

Fundora said Brito, too, will be working and not resting on the laurels of its 8-1 start.

“When we execute, we’re successful, so we never stop working on that,” Fundora said. “Obviously in this game, day in and day out, we have to keep working hard on something new. The day we come to the ballgame we feel we’ve worked on everything we’ve got to work on, then that’s when we’re going to fail.”