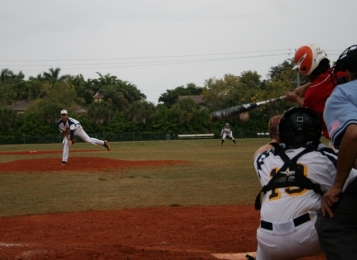 Mater kept the edge on Palmer by staying more active at the plate.

Mater Academy East and Palmer Trinity are two teams that match up well. Although they aren’t identical in team strategy nor strengths, they are neck and neck when it comes to competing. Both teams gave it their all Monday and battled back and forth before Mater Academy pulled out a 3-2 win.

It was the second meeting between the teams this year. Mater also won the first matchup, 8-5 in nine innings.

“We’ve played them two tough one-run games,” Falcons’ Manager Donnie Harvey said. “They’re a real good ball club, and they made all the plays they had to make.”

Palmer Trinity had the same opportunities as Mater East in Monday’s game. Both teams got their players on base nine times, but it ultimately came down to how quick they were able to produce runs as Mater East used its team speed to its advantage.

“I said it earlier in the season,” Scorpions’ Manger Laz Abreu said. “We are a very young and fast team. We are very aggressive on the base pads. We like to run in certain situations.”

The Scorpions did not get more runners in scoring position, but they did bring in every runner who manged to get that far.

Mater East cut it close against a team that had a strong arm on the mound. Julian Stark was the starting pitcher for Palmer Trinity and kept the game within a run. Stark threw more strikeouts than Mater and kept their batters at bay for the most part. He had a couple of pitches to pick from and was clocking some good speed on his fastball for all four innings he pitched. The right-hander has thrown 28 innings with only one walk during his career and was essential to keeping the Falcons in the game. 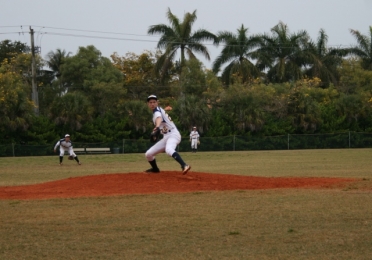 Palmer Trinity’s Julian Stark pitched a good game and was the anchor for his team’s defense.

The breaking point of the game was the fourth inning, where both teams scored a run and had five batters have  a chance on the plate. The game also intensified when the weather took a turn for the worse and it began to drizzle on Palmer Trinity’s home field.

The players did not show the effects of the afternoon shower and continued the game without delay. Stark even seemed to be throwing a nicer change-up, but Mater was more physical in the inning, which showed in their aggressiveness to win the game.

“I think our offense in the dugout came together to try to figure out a way to get in,” Abreu said about the fourth inning. “For the most part, I think that’s when we woke up and decided we needed to get on base, be a little bit better with pitch selections and see what they could give us.”