Overview – A year ago, Florida Christian and Westminster Christian, traditionally two of the strongest programs in the county, battled each other in a district final that the Patriots ended up winning 9-6.

The Warriors will be out to make sure that doesn’t happen again. It doesn’t help that Florida Christian beat them once already this year. 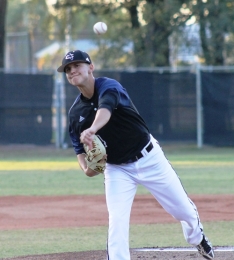 1. Florida Christian – It’s been an interesting year for the top team in this district, a perennial powerhouse. The Patriots are looking at a record just above .500. Trouble in paradise? Only the Patriots themselves can say, but no one should count out this team going into the playoffs.

Florida Christian opened the year its usual strong self and took a 10-3 mark into Spring Break when it competed in the Florida High School Invitational.

An eight-game losing streak ensued, but the Patriots seemed to have stopped the bleeding and have won their past two games against Monsignor Pace and LaSalle, swinging the momentum back in their favor for the district tournament, which they open Tuesday against the winner of the play-in game between Somerset Academy Charter and Palmer Trinity. Florida Christian defeated both those teams as well as the other two in the district for an unblemished record.

Hitting is a little down for the Patriots this year as the team batting average is just around .260. Milton Ramos (batting average around .415) and Ruben Someilan (about .350) are the top hitters. Ramos also has at least 17 runs and 14 RBIs.

The Patriots rely on five pitchers mainly, with the lead players being Andrew George, Alex Valverde, Michael Campos and Christian Pelaez. There’s no strikeout king here with four of the pitchers close to 30 or a little over in their strikeout total. 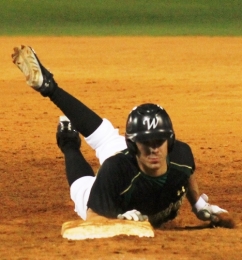 Luis Touron dives back into first on a pick-off attempt.

2. Westminster Christian – One of the most successful and respected programs in Miami-Dade is again enjoying a strong season, though a rough patch in early- to mid-March left the team sitting at 4-5. The stretch ended with a 4-2 loss to Florida Christian, the only district loss for the Warriors this year.

Since then, the team has gone on a 10-2 run as one of the hottest teams in the county and enters Tuesday’s matchup with Marathon having defeated Columbus, LaSalle and Mater Academy

The Warriors are a regional staple, having gone to the regionals every year but two since 1980.

With a team batting average of .356, the Warriors will be looking to their offense to help secure a district title this year. John Ruiz, who’s hitting around .470, and John Gonzalez, who’s close behind around .420 are the top hitters. Juan Infante and Luis Touron (both hitting around .390), Dakota Robbins (around .370) and Cole Krueter (around .345) also are swinging big bats this year.

Westminster has spread its pitching among seven pitchers mainly, with Jakob Zarello, seeing the most innings around 20. Other pitchers include Brendean Auerbacher, Infante, Zachary Tyre, Jagr Enriquez, Gonzalez and Ryan Terry. No pitcher has more than 20 strikeouts.

Outside the district, the team’s best stretch was from March 8 to March 19 when it won four of five games.

Marathon hasn’t been in a regional game since 1979. 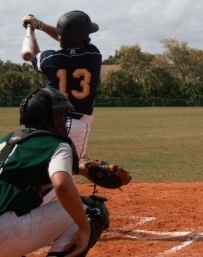 4. Palmer Trinity – The Falcons increased their overall win total by four games this year over last year, but they haven’t made progress in the district. Last year, Palmer went 3-3 in the district and this year is 2-3.

The wins have come against Marathon and Somerset Academy Charter with the losses to Westminster Christian, Florida Christian and Marathon.

The Falcons, who did not beat a team with a winning record this season, are seeking their first regional appearance since 2010.

To work toward that goal, Palmer will turn to its offense for help. The team is batting around .320. Blake Miller leads the way, sporting a batting average around .530. He’s also scored and drive in more than 20 runs.