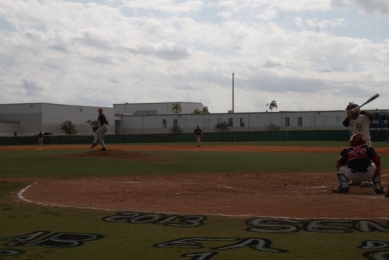 Sometimes a balk is a good thing.

Early into a scoreless game against Dade Christian, Braddock starter Anthony Baldrich balked to give the host Crusaders their first run.

But this mishap only fueled Braddock’s fire and became the catalyst of its hitting spree as the Bulldogs went on to win 11-1 on Monday at Dade Christian.

“I just shook [the balk] off,” Baldrich said. “I know my team’s got my back. You’ve got to be proud of them. They’ve come a long way through the season, and you see it in their hitting.”

Baldrich came back with a vengeance, getting the next three in the lineup out with a strikeout and two assists.

It wasn’t until the fourth when Braddock began unleashing its offensive fury of 11 runs in just two innings, including eight in the fifth to end the game by the mercy rule.

“I wish I could tell,” said manager Vic Montalvo about his teams’ offensive outburst. “We’ve been hitting the ball hard most of the year. We just haven’t found the holes; and that inning everyone found the hole.”

Montalvo wasn’t surprised by the offensive outburst from his team. He knows his team can be shaky, but once a guy or two gets on base, the whole team catches fire.

Because of this, the Bulldogs (9-10) have been having ups and downs throughout the season. But Monday was surely one of the team’s brighter moments.

To complement the hitting, Braddock’s fielding had astute players turning brilliant plays, like second baseman Gaby Mundo, who timed a jump perfectly to get a hard-to-reach line drive off the bat of Robert De La Vega.

Cris Rivera, also made some nice plays at shortstop, attacking the ball without fear, and Baldrich was mollifying home plate with a speedy fastball and well-dropped breaking balls.

Alex Perera tallied the lone run for the Crusaders (7-14), after he lined a double to right field leading off the second inning, before scoring on the balk call.