Host: Champagnat – Championship to be played at Milander Park

Overview – It is an interesting scenario is 2A-14, where the only two teams are automatically set into the district championship. After Horeb Christian dropped out of the district this year, it left the remaining two teams knowing they would qualify for the regional playoffs no matter what.

But certainly the road is much easier and more rewarding when it comes with a district title, something that also ensures a home game in the opening round of regional play.

This fact is not lost on top-seed Mater East, who swept the district with a perfect 4-0 record last season only to fall 1-0 to Champagnat in the championship, followed by a road loss in regionals.

The Scorpions swept the season series to remain undefeated in their two years playing in 2A-14, and now the true test to unseat the defending district champion Lions awaits. 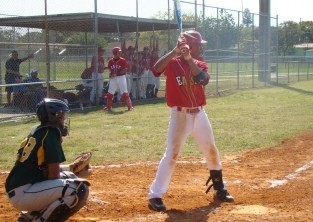 Jeter Downs has been a primary cog in the Scorpions offense.

1. Mater Academy East – The Scorpions have performed well even despite roster still full of youth for the newer program. The team plays an aggressive style of offense, combining speed at the top with tremendous power in the middle.

Coming down the stretch Mater East has gone 5-2 while playing teams from larger classifications that better prepare them for the playoffs.

Jeter Down, Renny Tolentino and Jose Garcia have provided the pop for the Scorpions. Garcia hit a grand slam against Champagnat in their first meeting this season, an 8-2 victory.

Tolentino has also performed well for the team on the mound, picking up six strikeouts in their first victory over the Lions. Right-hander Andy Escono and senior Brandon Stampler have also anchored the team’s pitching rotation, which has grown to show the depth it will need to compete in a tough region of Class 2A that features Westwood Christian, Miami Brito and Zion Lutheran. 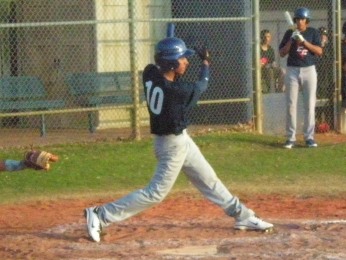 2. Champagnat – The young Lions face an uphill battle in the district championship and beyond. The team has but two seniors on its roster, and the young group has experienced some growing pains along the course of this season.

Champagnat has shown flashes of what its capable of, and will enter the district championship game as the defending champs after shocking the Scorpions in the title game last year.

Champagnat had an up and down season, with highlights coming in big wins over Palmer Trinity and Miami Country Day.

Senior righty Abrahm Figueira has been the top starter for the Lions, followed by left-hander Andy Garcia and freshman righty Brian Vieites.

Offensively, leadoff hitter Nosomoy Diaz is the spark plug that gets the team going. The speedy junior centerfielder excels at getting on base and then wrecking havoc on the base paths to help the team put runs on the board.

Scoring runs is something the Lions must improve upon in the playoffs, after having scored just 11 runs over its past six games.