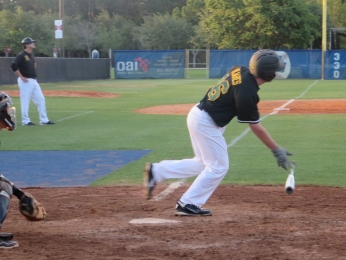 LaSalle’s Francis Mijares connects for a single, and he was 2-for-4 with a run.

As LaSalle Manager Oscar Benitez put it, this is playoff baseball.

The top-seeded Lions needed a five-run rally in the bottom of the sixth inning to pull out a 8-4 victory over Ransom Everglades in Tuesday’s 4A-15 playoff semifinal, played at Paul Maineiri Field at St. Thomas University in Miami Gardens.

Forget that their opponent had twice as many losses as wins, and that LaSalle had already beaten them twice this season; it was exactly the type of game Benitez had been expecting all along.

“Starting from the beginning we knew this was going to be this kind of game,” said Benitez. “There are no records here. Any team can get up there if a pitcher gets hot.”

That was the case for Ransom Everglades starter Royevan Armas, who worked his way into the sixth inning with a gritty, near-heroic approach.

But trailing 4-3 and coming down to their final swings, the Lions (12-13) erupted for a big rally that carries them back into the district championship, where they will face TERRA following the Wolves’ 3-1 victory over Doral Academy in the other 4A-15 semifinal.

“This district is great; we all battle,” Ransom Manager Steve Suarez said. “There are three other great coaches and they all prepare their teams well. We compete and we’re in it every game. This is probably the best game they have played all year. They did everything I asked and I couldn’t ask for anything else.”

Unfortunately for Ransom, the Lions also brought their ‘A’ game on Tuesday. 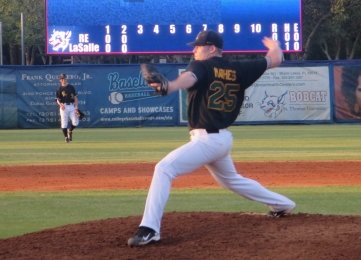 Mike Matheis started for the Lions and did not allow an earned run.

LaSalle finished the game with 10 hits in all, but up until the sixth the team had little to show for it after stranding nine runners on the bases.

Yordan Piedra was hit by a pitch leading off the inning, and Nick Canino followed by sending a line-drive straight back and off of the pitcher. A defender chased the ball down and attempted to make a late throw to first, but the throw went wild to allow the speedy Piedra to race all the way around the bases and home.

Canino quickly followed him home with the decisive run when Elier Rodriguez sent a blooper into right field for an RBI single.

It was a fitting end to the day for Rodriguez, after the Lions catcher was 3-for-3 and also walked to reach base in all four trips to the plate.

“I just kind of sat on off-speed pitches all day,” said Rodriguez, after he made adjustments to his approach at the plate based on what he saw the pitcher throwing. “If I know I’m getting a fastball, usually the next pitch is a curveball. So I just sat on it.”

Rodriguez was a part of every scoring inning for his team, and he jump-started them early on when he crushed a shot deep to right field for a triple in the bottom of the first inning.

“It feels good when you see your team back you up after you do something good, and when you see them all riled up is the best feeling you can have,” Rodriguez said. “But the way we played at the end of the game is how I want to play every game. That’s how we play.”

LaSalle built a 3-0 lead early on, highlighted by a big second inning in which Piedra lifted a pitch low in the zone and drove it deep to left field for the team’s second triple of the evening.

Canino connected for a sacrifice flyout to send Piedra home to open the scoring, and after Rodriguez singled to extend the inning and gave way to courtesy runner Steven Fajardo, Alex Garcia sent Fajardo home on a deep shot to the right field corner.

Garcia was 2-for-3 with a walk on the night. 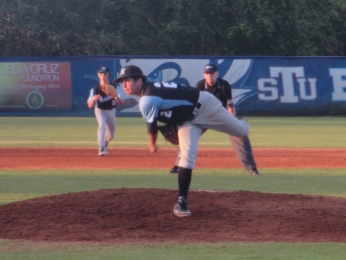 Royevan Armas came just one pitch shy of going the distance for the Raiders.

The run support helped Lions starter Mike Matheis settle into a groove, as the right-hander went five innings without allowing an earned run on a hit and two walks.

“Mike’s a great senior, a great leader. He did a great job of pitching. He controlled the strike zone and he did everything he needed to keep us in the game and allow us to come back,” Benitez said.

The Raiders (7-15) battled back in the top of the fifth inning.

Centerfielder Garret Rubin was hit by a pitch and Caleb Bush reach on an error to put two runners on with only one out. Jimmy Gutierrez followed with a tough at-bat before he sent a roller up the middle that loaded the bases.

“We’ve done that a couple of times this year,” Suarez said. “We’re young and we understand that sometimes hitting isn’t our strongest point. So we bunt. They practice on it so much and they did a great job with that. It’s come a long way with these guys.”

The maneuvers also drew the applause of Benitez.

“They had two squeezes in a row; that’s great coaching,” Benitez said. “Steve Suarez is a wonderful coach and they did a really great job of preparing for our team today. So our hats are off to them. It’s a shame they went home with a loss, but they have a lot to build on. They did a great job today.”

Early on in the contest, Garret Rubin had been called out on a stolen base attempt on a play that would have put him in scoring position with no outs in the inning.

It was a questionable call, and the baseball gods were listening.

With the game knotted in the sixth, Raiders catcher David Lanster poked a single into right field and then stole second base to get into scoring position.

Rubin singled to centerfield to push across Lanster, and he advanced to second as the throw went home. Fittingly, Rubin stood on second base and celebrated as the Raiders had their first lead of the ball game at 4-3. 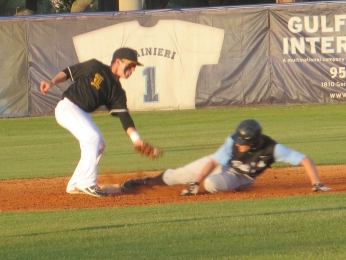 Ransom Everglade’s Garret Rubin is called out on this stolen base attempt in the second inning.

“David’s a battler,” Suarez said. “That was a great at-bat to begin with. He fouled pitches off and he really stayed with that guy. He stayed short like we’ve been asking him to and he really delivered. That was an amazing at bat. He’s high energy and he really loves it. He did a great job.”

But after LaSalle battled back to retake the lead, reliever Anders Gutierrez shut the door in the top of the seventh to secure the victory that improved his record to 4-3 on the season.

Gutierrez picked up three strikeouts in his two innings of work, while allowing a hit and two walks.

For Ransom, Armas nearly went the distance in the loss in throwing 106 pitches.

“He did a great job for them. He kept the ball low, made good plays and they were in the game,” Benitez said. “We’re in the playoffs, so as many times as we can get into dogfights, the more character of the team starts to come out and they get used to it. I’m very proud to be in the championship and hopefully we play well and win it. But TERRA is going to be tough.”