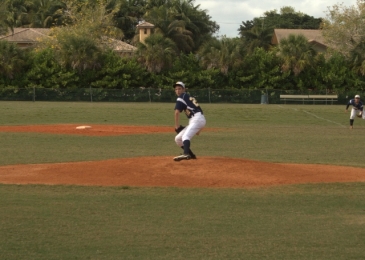 Julian Stark – Palmer Trinity – pitched another outstanding game while recovering from a cold.

Even in sickness, Julian Stark can nullify the plate with his exceptional arm.

The junior has had a remarkable season with the Falcons, racking up four wins and only one loss, and almost breaking a school record by getting 14 strikeouts in one game.

Stark was true to form when he managed to get five strikeouts and only allow two hits in four innings while recovering from a bad cold.

But Palmer Trinity’s ace kept his composure and concentration dissimulated from his actual condition and pulled through the 11-1 victory against Boca Raton Christian.

“He’s competing, and he came and gave us the four innings we needed out of him,” Manager Donnie Harvey from Palmer Trinity said. “He’s our ace, and he’s our stopper, and he’s the guy we depend on to go get people out. Even if he was under the weather and not real sharp today, he still found a way to get through the innings and get the job done.”

Stark’s performance was not a solo act in this game, though. The Falcons have had the problem before of doing phenomenal on the hill and then failing on producing runs, but that wasn’t the case Tuesday. Trinity showed up on all aspects on the field, keeping a tight defense and taking opportunities on offense to get early runs.

Harvey understood that his team players are not hard hitters, but they make it up in speed and contact, so he capitalized on small ball and kept them stealing bases from the beginning of the game. 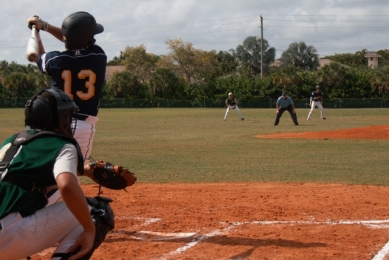 Justin Ziegelasch hits one into right field and makes it to first in what would have been a routine out, if it hadn't been for an error in right field.

The Falcons aggressiveness paid off, producing four runs in the first inning and scoring the other seven in the fourth and fifth.

It started with some slow pitches from Boca Raton Christian.

Although their starter, Clay Patten, had good movement and a good drop on his breaking balls, the pitches weren’t coming in fast enough to pass Palmer Trinity’s batters.

After walking Ben Roberts and allowing a hit to Nick Font, the Blazers began to crack.

“We were flat today,” said Blazers manager Clint Erickson. “We made some errors that were unacceptable. Mentally, we just weren’t in the game.”

Boca Christian just fell of beat early in the game, causing two errors in the first inning. Their defense wasn’t their main concern in the early game either.

Stark struck out the first two pitchers in the lineup, getting ahead of them with the speed of his fastball. The tempo of the game carried out the same.  Stark never allowed more than four batters per inning challenge his arm, except in the second, where a sacrifice hit from Boca Raton’s Jarrett Mays advanced Johnathen Kreh to home plate.

“They were solid today,” Stark said about his teammates’ defensive performance. “Shortstop was a little slow on a couple balls, but we can work on that. Overall, we did well on defense.”