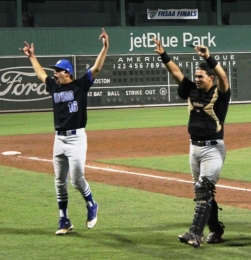 One season after a heart-breaking 1-0 defeat in the state final, the Westwood Christian Warriors found themselves back on the same stage against the same opponent.

Now, this story has the ending every baseball dreamer hopes for.

Behind an impressive performance from senior starter Jason Gutierrez and a red-hot lineup that scorched the ball all night long, the Warriors can now call themselves champions following their 9-3 victory over Trinity Christian-Deltona in the Class 2A state final played at jetBlue Park in Fort Myers Thursday night.

“My hat’s off to Trinity Christian; what a great program and a great group of coaches,” Warriors Manager Luis Padron said. “They are decent people and they wished me well yesterday on the win. But my boys came to play today.”

In fitting fashion, Gutierrez closed out his complete-game performance by firing a fastball past the final batter for a swinging third strike that ignited the celebration.

“That last pitch, I put some extra mileage on that one. I was hitting the outside corner all day long so I just gassed it up a little bit and put it all on my last pitch,” Gutierrez said. “It feels amazing. My first time at states and I pitched in the finals and got to go the whole way. It’s the biggest moment of my life. For our team it means a lot. The first state championship at the school ever, so it’s really big. It’s something to cherish.”

Gutierrez recorded nine strikeouts on the night, while allowing just one hit against the defending-champion Eagles (17-11). The right-hander set the tone right out of the gate, as he struck out the side in the top of the first inning.

The Warriors (17-7-1) then put three runs on the board in the bottom of the first inning to stake their starter with the early advantage.

“The first inning was huge. I struck out the side and then my team came up with some runs. That helped me relax a bit,” Gutierrez said. “I knew to win the game I had to be one pitch, one out, one inning at a time. I did a good job of throwing strikes. I came here specifically to win a state championship, and nothing can stop us when we play our game.” 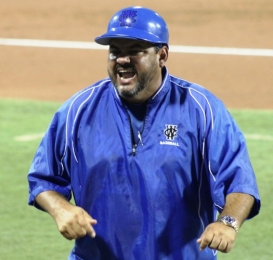 For the Warriors, that game is an aggressive approach that works to put pressure on the opposing team. Westwood did exactly that, as every batter who came into the lineup reached base. The team was equally aggressive on the bases, stealing seven bases in all.

“Sometimes it’s better to be lucky than good. Yesterday we were lucky, the other team did not catch the ball,” Padron said. “But Trinity Christian catches the ball well, so I told them you’ve got to hit the ball gap-to-gap and crowd the plate against that lefty. We just hit him hard.”

Westwood jumped all over Eagles left-handed starter Tyler Lawrence (4-3), as Anthony Gonzalez got things going as he sent the first pitch he saw into center field for a one-out single in the bottom of the first.

Luis Diaz connected on a deep shot that bounced off the Green Monster wall in left field for a double that put both runners in scoring position. After Anthony Penas walked to load the bases, Miguel Gonzalez lifted a pitch deep to right-center field for a sacrifice-fly RBI that allowed Anthony Gonzalez to come in with the first run.

Celebrating his birthday on this big day Anthony Gonzalez played a huge part in the win, going 2-for-2 with a walk, a stolen base and a pair of RBIs.

“Since this morning the whole team kept coming and telling me happy birthday. They love me and I love them too,” Anthony Gonzalez said. “Once we started up, we had chemistry where we can do anything. This whole team is great and they came through for me.”

On a team that already plays with such open passion and emotion, this extra bit of motivation served as another rally cry that helped fuel the team to victory.

“We told him before the game this is going to be your game, this is your day, and we’re going to win it for you. We’ve got you,” Diaz said. “Baseball is a game of streaks; once you hit there is no stopping. He was pitching us inside so we just took advantage of the inside pitch.”

Diaz helped extend the lead in the first as he scored from third when the pitcher threw the ball into the dirt at the feet of the first baseman on a pickoff attempt. This gave the speedy shortstop Diaz all the opportunity he needed to make it 2-0 and keep the pressure on.

Claudio Ruberia added another dagger as he crushed a shot deep to center field for an RBI double that brought in Penas. 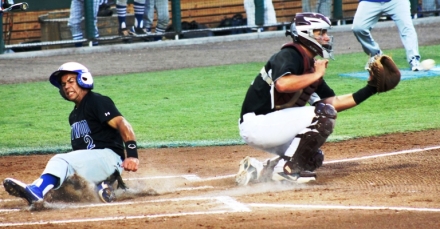 Westwood Christian’s Luis Diaz slides in safely ahead of the tag from Trinity’s Dusty Miller.

The Eagles removed their starter and opted to go to right-hander Nelson Mendez to start the second inning, but Westwood jumped on him right away.

Robert Hernandez drilled a one-out single past the diving shortstop, and then easily swiped second base on the first pitch thanks to a great jump. He then stole third, before coming in on a sac-fly off the bat of Anthony Gonzalez.

After Diaz reached on an error, Penas connected for a deep shot that bounced off the Green Monster netting to put runners on second and third. Miguel Gonzalez followed that up by crushing a shot higher and deeper off the Monster for a double that sent both runners home, putting the Warriors up 6-0.

In the top of the third, the Eagles battled back.

“The third inning was kind of rough for me, but I had a good feeling inside that I was going to get out of the jam and finish the game,” said Gutierrez, after Trinity Christian was able to rally back for three runs in the frame. “After that third inning, coach told me I got one more. But I told him I’ll keep going; I’ll tell you when I’m tired. I just kept going on adrenaline.”

The Eagles worked Gutierrez for 34 pitches in the inning, sending eight batters to the plate. Spencer Taylor drew a leadoff walk, stole second and then scored when Brady VanHook reached on an error.

Drew Catalano reached on an error and scored on an RBI single from Mendez. VanHook cut the lead to 6-3 when he scored on a fielder’s choice RBI groundout from Dusty Miller.

Padron had four capable relief pitchers in his bullpen, but Gutierrez was able to convince his skipper that he could keep going without any problems.

“He’s a senior and a real gritty guy. Out of respect for him being a senior I said OK buddy, we will go inning-to-inning, and you tell me,” Padron explained. “His fastball was unbelievable. They were sitting on his curveball early on, so we used his fastball when they were thinking curveball. We pitched backwards and he did an outstanding job. I’m just so proud of that young man. I said God please, this boy has prepared himself to pitch today, let him do the job, and he was wonderful.”

Gutierrez would not allow another baserunner until the top of the seventh inning, retiring the side in order on just 29 pitches over the next three innings.

Meanwhile, the Warriors’ offense continued to plug away and eventually put the game out of reach. 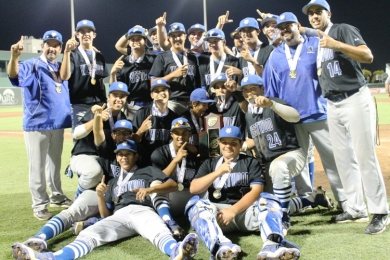 Danny Fernandez scored on a Diaz sac-fly in the third.

The Warriors added a pair of runs in the fifth when Brandon Nayor singled and came in to score on an infield error. Robert Hernandez, who reached on the error, came around to score on an RBI single from Anthony Gonzalez to put the Warriors back up by six runs at 9-3.

“It’s never over until the last out. We got comfortable there in the third,” Padron admitted. “We went up six runs and we got comfortable. I told my guys we’ve got to score more because six runs are not going to do it. I said I want more runs on the board, and they came out swinging.”

After allowing a leadoff walk to start the seventh, Gutierrez was able to fight through and shut down the next three batters to close out the biggest win in Westwood Christian team history.

With the game in hand and the celebration under way, the most integral member of this special group of players happened to be the furthest away from the team and down in the bullpen with the relievers.

But as Danny Garcia raced across the outfield grass to join his teammates in the celebration pile near the mound, there was no one who was happier than the Westwood ace pitcher who had played such a huge role in making this historical moment possible.

For Westwood Christian’s players, coaches and fans, Thursday night marked the biggest moment in program history. For the first time in the school’s 53-year history, the Warriors are champions.

“They did a wonderful job and I’m just so proud of them,” said Padron. “I can’t tell you it’s easy to get to states, but the way my father taught me I don’t take a minute off. I’m a man of commitment. If you look at my life, its 25 years married to the same sweetheart who was sixteen when we got married, it’s the same business for 28 years. That’s how I do it; I’m in the game every pitch, every out, every at-bat. That’s what makes me successful both at home with my family and with baseball. I’m blessed with a beautiful family, a great business, and I’m blessed to coach a group like this.”