At Westland Hialeah, Baseball Is More Than A Game 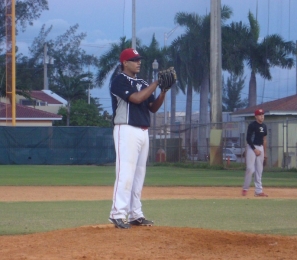 Despite a tumultuous offseason, senior Erik Gonzalez has shed 60 pounds to prepare for the season.

While most high school baseball players spent their summer hitting up the gym or going to the batting cages to take a few swings, for best friends and Westland Hialeah seniors Erik Gonzalez and Frankie Morejon, their summer almost took a turn for the worst one summer day.

The two players and a couple of friends had just arrived at Gonzalez’s house 15 minutes earlier, when gunshots erupted just down the street. Gonzalez gathered the group and they locked themselves in a room to avoid any stray bullets. Gonzalez tried to keep the group calm through the whole ordeal, which went on past four in the morning. Thankfully no one in their room was hurt. However, gunman Pedro Vargas eventually killed six people in the West 46th street apartment complex before SWAT officers killed him in what is now known as the Hialeah Massacre.

Gonzalez recalls nearly every detail from the incident.

“I tried talking to them keeping their mind off of things, you know, hearing the shots go off, the SWAT officers shooting,” Gonzalez said. “It’s hard to stay calm in that situation, but I kept a cool head. Eventually it was around 4:15 in the morning when they started letting people back in, and we hadn’t slept the whole night. I thank God that I’m alive and I’m here and playing baseball.”

For Gonzalez and Morejon, the incident only tightened their bond as they enter their last seasons at Westland Hialeah together.

Wildcats Manager Jose Alvarez will count on the duo to lead his young team on the diamond in 2014. Westland graduated seven seniors last season, including HSBN All-Miami-Dade County catcher Luis Corrales, who hit .500 last season and led the county with eight home runs.

“We have four or five seniors but we are still going to be young this year,” Alvarez said. “We have a lot of work to do and I don’t feel like we are where we need to be right now.”

The Wildcats are coming off of a season in which they finished 10-11 and fell to Mater Academy in the first round of the District 6A-16 playoffs. 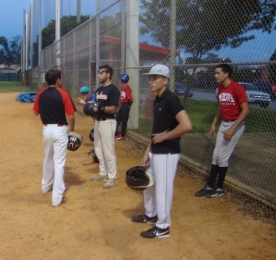 This season, Westland has moved up to District 7A-16 and will battle American, Hialeah-Miami Lakes, North Miami Beach, Reagan, and Miami Central.

“The positive is that we are in a district with all public schools, so we don’t have to worry about private schools that usually have much stronger teams,” said Alvarez. “American is a powerhouse, they can beat anybody, anywhere, so that’s the only downside.”

Alvarez admits his team is going through the growing pains with so many inexperienced players on the roster.

“You have to go over simple things because they haven’t been through the system yet,” he admitted.

On the mound, Alvarez is looking for some arms to step-up and eat up innings during the season. At the moment pitching has been a problem, as they have one quality arm and the rest are mostly one or two inning guys. Sophomore righty Giovanni Arriera will be a go-to guy on the mound this season after leading the team in wins in 2013.

On the field, Alvarez will count on Gonzalez, Morejon, and senior Carlos Ruiz in the outfield to step up into leadership roles. Ruiz hit .358 with 11 RBIs, while Morejon, who moves from second base to shortstop, hit around .263 with 19 runs scored last season.

“Now that we’re seniors we feel that we’re more confident and we’re helping other players get better,” Morejon said.

Gonzalez will enter his first season as the starting first baseman and has shed nearly 60 pounds to prepare for the season. 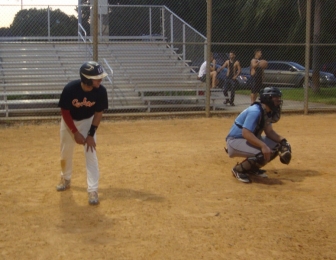 “Last season I was at 293 pounds and I’ve cut down to 235 now,” Gonzalez said. “My bat speed has gotten a lot faster and I’ll obviously be able to steal some more bases this season.”

The challenge for the Wildcats will be to find some young guys who are ready to make an impact during the season. Alvarez has had to go back to the basics to reach his younger players.

In what appears to be a wide open district with American as the unanimous favorite, Westland has a great shot to make the playoffs if the young guys can hold their own.

“I think we have a pretty good team this year, we’re all just working towards getting past that barrier we have,” Morejon said.

The tragic events that unfolded before them has reminded everyone just how precious life is. The road ahead is not easy, but it comes by playing a game they love with guys they love. It is chemistry that matters the most, and the Wildcats have been given a reason to celebrate the chance to play alongside these guys who came so close to something far worse. Everyday is its own reward, and the players won’t soon forget it.