Reagan Bison Strive For Consistency in 2014 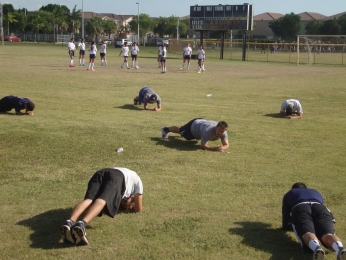 Senior Joe Diaz leads a workout as the team shares the field with the girls soccer team.

Coming off their first winning regular season since the school opened in 2006, the Reagan Bison look to build off of that momentum under second year manager J.C. Huguet. The team finished 11-11 overall last year and with a few key pieces returning, Huguet hopes to establish a consistent competitor at the school located in Doral.

“We’re just gonna go step-by-step,” said Huguet.”Let’s have a winning record in district, and then qualify for the district playoffs, and then lets see what happens from there.”

The Bison nabbed the number two seed in District 8A-14 after finishing 7-3 in their district, but the team fell 5-4 to Goleman High in the first round of the district playoffs. This season, Reagan has moved down to District 7A-16 with three playoff spots likely up for grabs outside of state title hopeful American High.

Huguet acknowledges that he has the tough task  of replacing seven seniors from last season, including three HSBN All-District selections.

“It’s gonna be tough since we lost a lot of seniors that led us to that first .500 season last year,” Huguet said. “We have a new district that looks favorable, but you never know until you start playing in it.”

Reagan loses its top two pitchers from last season in Arturo Rincon (41 Ks, 3.99 ERA) and the 2013 District 8A-13 Pitcher of the Year, Luis Rincon (5-2, 1.52 ERA, .337 B.A. 15 RBI). Huguet is counting on his young arms to fill the void left by the departed starters. Seniors Raul Cortes and Steven Feierabend, and juniors Carlos Mancilla and Edgar Pages all saw action on the mound last year and will have an increased role in 2014.

“We have some good arms; now the question is can they perform during a game,” said Huguet. 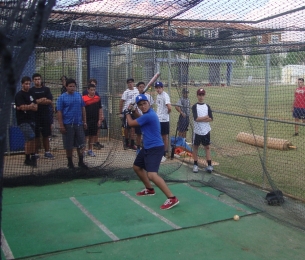 Bison players take reps in the batting cages during practice at Reagan High in Doral.

The Bison also have some questions to answer in the lineup as well. The team will be without All-District shortstop Sergio Santana (.364, 23 R, 17 RBI) and utility player Paul Menendez (.358, 17 RBI, 8 doubles) in 2014. However, the team returns senior outfielder and HSBN first team All-County selection Joe Diaz (.375, 21 RBI, 7 triples). Reagan averaged nearly seven runs a game and hit around .341 as a team in 2013. Even with some key players gone, Huguet believes his team can hit the ball just as well this season.

“We’re going to focus on hitting the ball the other way and shooting the gaps,” he said.  “We’re not going to hit a lot of home runs, but we sure hit a lot of doubles last year and that should be the goal again this season.”

Diaz and Cortes return as legitimate threats in the lineup but the team needs other players to step up and help with driving in runs.

“Whoever comes and wants it the most are the guys we’re gonna go with,” Diaz said.

Besides the hitting and the pitching, the team has one obstacle that is out of its control: the facilities. Due to a lack of space on the Reagan campus the team has to share a field with nearly all the athletic teams at Reagan, making running through a full practice a near impossible task.

During the fall the team has had to share the field with the football and soccer teams, limiting what Huguet can walk through in practice. It’s a problem that many schools in Miami-Dade county face, but the challenge is especially tough on a team trying to build a respectable program in one of the most talent-rich baseball regions in the nation.

“Our biggest challenge is our field. We don’t have a baseball field to ourselves and we share it with all the sports, soccer, football,” said Huguet. “Throughout the year it gets beat up and its tough to get some full-fledged practices in. I know everybody has fall ball going on on their own fields and we can’t do that. And you know what, we’re not the only ones so we have to deal with it.”

Despite the challenge, Huguet says the players overcome it by working out on their own by doing things like going to the batting cages during their free time. 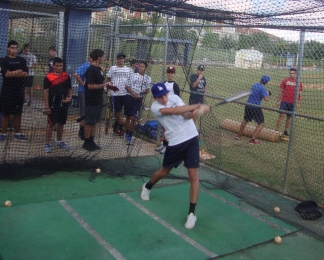 Without a full field to work on, Reagan Bison players take reps in the batting cages during practice.

“We try to take our infield on the softball field, and try to hit a lot in the cages and then when we do get that time to hit on the field we do it, and we do it good,” Diaz said.

The Bison will roll out one of the better lineups in their district this season, if the team can develop some solid arms on the mound they will look to challenge American in the district playoff race.

With such a young program that is still carving its niche in the county, the club welcomes the challenges they will face this season. The opportunity to take this group farther than ever before has the players amped up with determination. the team wants to build off of last season, and in 2014 those sights will be set on securing a district playoff victory and hopefully earning a spot in the regional playoffs.