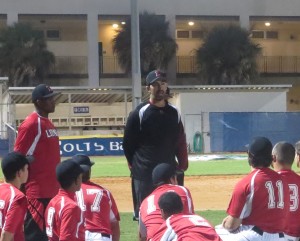 Young teams do not normally look and act like the Sagemont Lions do.

This roster brings tons of poise and baseball awareness to the field, despite the fact that they are mostly underclassmen. The players come from a community that is deeply ingrained in the game of baseball, the players know and love the game, and even though they are young the team has just enough of the right pieces in place to contend.

Their ability to execute the fundamentals and maintain the basics gives them the chance to overcome any obstacle. The group as a whole does not appear to be as young and inexperienced as they actually are, and this poise could help take them further than most may expect them to go.

“They love baseball and they are always ready to go. You can’t ask for anything more,” said Lions manager Wesley Morejon. “Coming from the area in Weston that we do, they have played a lot of travel baseball and we do with what we’ve got. With the seniors, you expect them to lead by example and also on the field, and I don’t expect anything less. We have some good core guys and some of them have been here all four years. So I expect big things from them this year.”

Morejon is in his second season at the helm, and he knows he is past the time where he was just getting his feet wet. He has earned the player’s trust and the team is more focused on getting better and excelling in his system now. It is a very coachable group that he brings to the fold this season, and a bunch that are very versatile and able to help the team in many ways all over the field.

The main focus with this group this season is to continue on with terminology and basic fundamentals for the returning guys. They have to make sure they are not taking a step back and showing improvement. With the new guys the approach will be to make them feel a part of the team and to continue growing.

There is crispness in the way the Lions approach the game. The players communicate well on the field and there is energy and excitement vibrating from them. The passion to play is unmistakable. It is a family environment, which is fueled along in that regard by the fact that a few of the guys really are siblings to one another. Over the past several years there has been a lineage of family members playing together on the teams, and the strength of that benefit has really taken hold at this point. 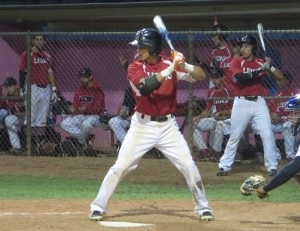 Brynn Martinez will wreck havoc from the top of the Lions order.

Brynn Martinez is the team’s unquestioned leader, and also one who has been a part of this family for a long time. The senior shortstop seemingly covers the entire left side of the infield with a strong arm on all throws, while also hitting leadoff and spraying the ball all over the field, while then turning on the jets on the bases. Martinez seems to do everything and all the other guys thrive off of it.

“I always tell the older guys, you are not just the best players on the team but you are also leaders,” said Morejon. “So when a young guy hears it from a senior and he also is the best guy on the team it really means something.”

Martinez batted .362 with 16 runs, nine RBIs, five doubles, three triples and two home runs in 2013, and he recently signed his college letter of intent with Quincy University. As a guy who started off in the same footsteps as his new teammates, he understands what a great experience they get that most guys do not get until their junior or senior year.

“I played varsity when I was in seventh grade with my brothers and the older kids who really brought me along to help me take on that role where I could be a leader,” Martinez said. “Now that I’m in that spot I’m trying to bring all the guys along and try to make us all come together as a team. It’s a cool perspective to see how much you’ve grown and how you can help other kids grow in life and in the game on the field. They get that in their early years, so they get that time to build to what they want to ultimately accomplish.”

Hitting deeper in the lineup behind Martinez is one of the team’s big guys who have been flying under the radar, senior Sean Iacono. He led the team in hits while batting .397 with 18 runs, 12 RBIs and five doubles last season. Martinez says his role in the leadoff is made easier having a guy like Sean Iacono behind him who is able to move runners over and really drive the ball.

“They set the table for us and they start eating off that table as well,” said Morejon. “Brynn gets on, wrecks havoc with his speed and Sean just drives him in and keeps that chain moving for the rest of our lineup to continue. They are solid off the field, on the field and I couldn’t ask for anything else.”

Iacono enjoys his role in the lineup, and enjoys trying to be the guy to produce for the team. He focuses on putting the ball in play and taking it to right field by staying in on the ball. He understands what a lift it brings to his teammates whenever the big guys can help ignite things. This also includes his defensive approach, where he plays a prominent role in center field most of the time.

“It’s great to be a role model and try to lead by example and do the right things,” said Iacono. “I’m just trying to be solid on defense, make those routine plays and then if you can make the big catch or throw somebody out that’s good too. That helps our pitches. Communication is a big part of the game too, so you have to keep everybody’s heads up so they stay focused.” 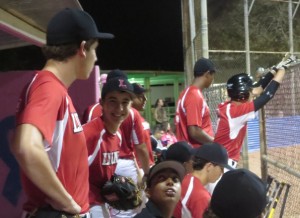 The Lions have tremendous team chemistry, and the group communicates well together on the field.

Focus is essential for the team when they head down the stretch run of the season, as they look to improve from a late-season skid in 2013. The Lions will look to stay with the fundamentals and mechanics each day, and let the game take care of itself.

Another boost that has helped give the club more confidence they can finish the season strong comes from an intensive strength and conditioning program that the players have participated in this fall. The program is provided by the school for all the sports and the players have thrived on it. They love the little aspects and learning of muscles they never knew they could work. It has helped them bond as they work out together, and the players are better fine-tuned for the grueling season ahead.

An area where this will greatly aid the club comes in their pitching staff. Senior starter Andres Vazquez has improved his body and come back in great shape to assume the number one starter’s role. While he does not have overpowering stuff, the right-hander commands his spots and he has an arsenal of four or five pitches.

The team will piece the pitching staff together behind Vazquez, shifting guys each day since the small roster means guys play all over the field whenever they are not on the mound. Into the mix for the rotation will be senior Edgar Abreu, freshmen Nico Leontarakis and Alexis Castillo and eighth-grader Adrian Parker.

This versatility within the roster will also help to maneuver against a new group of district opponents, all of which come out of Miami-Dade County. The Lions will play a new slew of district teams, and there will be advantages and disadvantages in facing unfamiliar clubs.

“It’s going to be different,” said Iacono. “We are not used to seeing those kinds of pitchers; they are different guys. We had become familiar with our other districts because we had been playing in them for so long. We’ll see. We are kind of indifferent about the new district; we really just want to go out and do our best against anyone.”

Coach Morejon enjoys that his team focuses on the things they can control. They handle themselves in the classroom and on the field, and they have just the right type of chemistry to help create their own fortunes.

“We are always fighting to the end,” Morejon said. “Even when we have no business being in a game, we are in it. Even if we are down we have that fight in us, and it all comes down to this group of guys. They are going to fight all the way; we have tenacity to always go after it.”