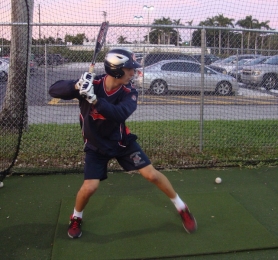 The Miami Country Day Spartans and Manager Paul Barrios went through the growing pains of fielding a roster loaded with younger players last year. The team had four seniors but the majority of their production came from the underclassman and even a few middle-schoolers.

This season, many of those players have returned after enduring the ups and downs of a 7-15 season. The always optimistic Barrios will try to lead his team back to the district playoffs and their first South Florida Baseball Conference Championship since 2012.

“I know we’re much improved from last year with the guys we have coming back,” said Barrios. “We’ve gone through summer baseball and we’ve gone through fall baseball. That’s something that was never done here where these guys were playing year-round, so I see improvement from 7-15.”

The Spartans season ended after losing to eventual District 16-3A champion Mater Lakes Academy in the first round of the playoffs. This year, Country Day may face a tougher road to the playoffs with new teams in the district. The team is now in a league with rival Archbishop Curley, Dade Christian, Hialeah Educational Academy, Weston-Sagemont, and 2013 Class 2A state champion Westwood Christian.

“We’re going to try a lot of things early. There are a lot of questions we have of where things are going to fit, and what kind of role our ninth graders are going to have in the program,” Barrios said.

There are eight underclassman on the roster this season, including a few players who saw varsity action as eighth graders for Country Day.

“A lot of the core is our sophomores, guys that are up-and-coming like our catcher Juztin Gross and pitcher Jose Oronoz,” said Barrios. “These guys keep getting bigger and stronger. Freshman third baseman Austin Pollak played for me as an eighth grader and he’s gotten bigger and stronger, and I’m looking for a lot of big things out of him.”

In addition the appropriately named freshman Colton Katcher will also see action behind the plate this season.

Even with the talented youngsters, the Spartans success will depend on how well the seniors perform.

“The seniors this year have the experience to lead the team to do better than last year,” said senior infielder and pitcher Michael Fente, who posted a .351 batting average to go with his 18 runs and 12 RBIs.

With eight seniors on the squad, they have a responsibility to perform on the field and show the younger players how to play the game. Barrios is counting on seniors Carter Weiss (.327 B.A. 19 R), Adam Seif, Steven Soriano, and Fente to lead the charge for Miami Country Day.

They don’t have any home run hitters but the Spartans will scrape and claw for every base hit and run scored.

“We may not be the biggest guys but we’re a pretty scrappy squad. We’ll get on base any way we can: hit by pitch, walk, swing and bunt,” Reis said. “This might be my last year playing baseball so I’m coming into the season ready to fight.”

Weiss and Fente will shoulder the load on offense this season. The two have worked in the offseason to get bigger, faster, and stronger.

“Most of the team has been trying to get in the weight room the past year trying bulk up and get 10 more yards on those almost home run hits,” Fente said. “Carter has definitely got a lot stronger since last year and I think he’s going to hit one out for sure.”

On the mound, the pitching staff is searching for consistency. Last season, the team sent position players on the mound to pitch. This season, the roster has players that focus on pitching first. Fente, Gross, and Oronoz will form the starting rotation and the bullpen is stocked with freshmen and sophomores ready to prove that they belong on the varsity level. 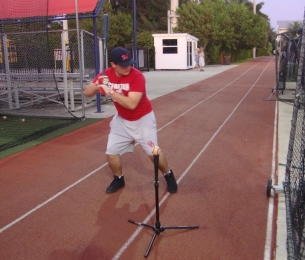 The Miami Country Day Spartans work on their hitting while other teams occupy the playing field.

With only a few hundred students enrolled  in the small private school in Miami Shores, the talent pool is limited and Barrios has to get the most out of each player on the roster. The third year manager focuses more on developing his players over simply winning baseball games.

“You told me I was 7-15, for me its not really about the record. People ask me what my high school record is and I have no idea, because that is not the reason I do this,” Barrios said. “I’m not just a coach, I’m here to teach the game and help them develop into young men.”

One of the skills he preaches is versatility. Each player is coached to play two or more positions and hit in multiple spots in the batting order, which makes the manager’s job easier when he has to make a key substitution during a game.

“Everybody has their challenges, but its up to you how you deal with those challenges,” Barrios stated. “Our middle school is like our farm system because we don’t have kids that walk in here from other schools.”

Another challenge the team faces in sharing their field on campus. The Spartans play on a multipurpose artificial turf field that they share with the other outdoor teams on campus. When other teams like boys and girls soccer or lacrosse play, the baseball team is limited to using the batting cages and a small section of the infield. In spite of the challenge, the team doesn’t sulk about not having a field available.

“We’re blessed to have this field. We work with what we’ve got, and a lot of times we might be restricted. But that’s what the batting cage is for and we’re still able take ground balls from shortstop,” Fente said.

As the regular season approaches the seniors realize this is their last chance to build their legacy.

“I might not play baseball again so I’m ready to go out this season and fight until the end,” Reif said.