Country Day Prevails In A Shootout With Boca Christian 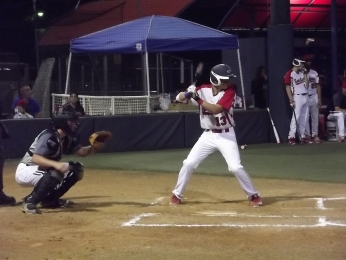 Carter Weiss had a big day at the plate, as well as making a stellar catch in the field.

Baseball fans who love tons of offense got exactly what they wanted Tuesday afternoon, as Miami Country Day prevailed in a 12-9 shootout over Boca Raton Christian.

Leading the charge for the Spartans (1-0) was center fielder Carter Weiss, who was 2-for-4 with a pair of doubles. But it was his play on defense that gave the crowd the most emotion. With the game tied at six apiece in the fifth inning, Weiss chased down a ball hit deep to center and jumped for the catch, making a spectacular grab in a big moment.

“Once the ball was hit, I started running,” Weiss said. “I thought the only way I can catch this is by laying out and hopefully my left fielder is there to back me up, and I just came up with it.”

When a player makes a big play on the field, they typically carry some of that momentum to the plate. Weiss highlighted this trend in the bottom half of the frame by legging out a groundball hit through the middle and sliding safely into first to get on base. Weiss then stole second and came home to tall the winning run.

For winning manager Paul Barrios, even with the immense amount of work that was put into his young pitchers, this was a learning experience.

“It was really needed. The starter, Jose Oronoz, is a 10th grader, and all three of my reliever were 9th graders,” Barrios said. “I used everybody, I used my entire bench; so that makes a head coach happy.”

On the Blazers side, the spark was brought by the starting pitcher, Logan Rataiczak. Rataiczak made his presence known at the plate, going 3-for-3 with three walks, three RBIs and a home run to left field.