Dade Christian Steals Game Of The Week At Country Day 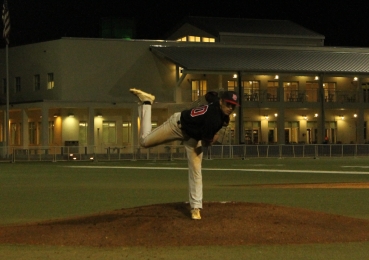 Dade Christian is used to playing in big games on a grand stage. The Crusaders welcome those challenges in order to prepare them for days like Friday night, when they traveled to district rival Miami Country Day for the HSBN Miami-Dade Game of the Week.

Both teams entered the contest with a 1-0 district record in 3A-15, meaning the victor would take an early lead in the district standings. Adding the Game of the Week element to the match up at Dubois Frazier Baseball Field Friday night simply helped to raise the game atmosphere for this early-season showdown.

“We’re not strangers to big games,” said Dade Christian Manager Reggie Rodriguez. “We’ve had big games before and this year we’ve already played Braddock. Those things help. We always try to play up and face good competition so that games like this we can be successful in.”

The plan worked to fruition, as Dade Christian built an early lead and then rode their pitching staff to an eventual 6-1 decision. The Crusaders (3-1) scored all their runs in the first two frames, before senior starter Anthony Munoz settled in and took over to make sure that lead would hold.

Munoz was lethal at attacking batters, throwing 60 of his 83 pitches for strikes and going right at each and every batter.

“When it was 6-1, I felt super comfortable,” said Munoz. “I just hit my spots and did great. The defense was good and we got enough runs, and I was able to come through, thank God.”

The right-hander allowed one unearned run while scattering seven hits over six full innings of work. He hit one batter, walked none and piled up 11 strikeouts on the night.

“Anthony Munoz did a great job, and his experience allowed him to do it. He’s a four year starter and he’s been working really hard,” said Rodriguez. “He got ahead early and he stayed ahead. He got a lot of ground ball outs. A lot of that credit goes to our pitching coach, Anthony Nalepa. He’s done a wonderful job with them, making sure they throw strikes, keeping the ball low, and working in and out.”

The Spartans (3-2) found the most success with their opening swings. Carter Weiss reached on an error, advanced on a throwing error and then scored when Austin Pollak smacked an RBI single to centerfield that cut the deficit to 2-1. Garrett Kramer then laced the first pitch he saw over the leaping shortstop to put runners on the corners. Juztin Gross drilled a single up the middle to load the bases, the first of three hits on the night for the Spartans catcher. 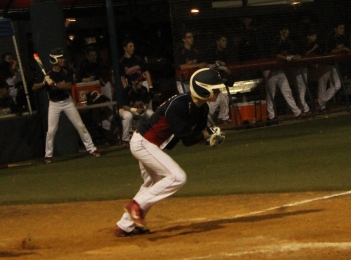 Jordan Sale puts the ball in play for the Spartans. The freshman also had a big day on the mound with five shutout innings of relief.

In what would turn out to be the most pivotal point of the contest, Munoz was able to record a strikeout on a full count pitch to end the frame and escape the threat relatively unharmed. It was also the fourth strikeout recorded by Munoz in the first, a baseball rarity accomplished after a batter reached on an error on a passed ball.

The only two errors in the game came on that same play in the first, but then both clubs hunkered down to play solid defense throughout. Both sides also made some big plays along the way, such as when the Spartans Jesse Grosman dove out to snare a liner to short. Crusaders senior Luis Reyes had another impressive diving catch on a shot to second base, and Phillip Edwards made a leaping grab and throw at third for another impressive putout.

For the Spartans, this was one of the bright spots on the evening. With nearly all of the infielders either in eighth grade or ninth grade, Country Day Manager Paul Barrios was particularly pleased with the way they responded to the challenge.

“I have five ninth graders this year and they have all made contributions so far,” said Barrios. “The future looks good and our middle school program is just bringing us guys. It’s a great environment for them. It’s only our fifth game of the year so I probably look at it a little bit differently than they do. I just wanted to see how we compete and all that.”

Early in the game, Barrios was forced with the decision to go to the bullpen for freshman right-hander Jordan Sale in relief of their starter. Sale responded to the challenge by tossing five shutout innings, allowing four hits and a walk while striking out six. Of the 86 pitches he threw, 54 of them found the strike zone.

“He’s a ninth grader and he’s got it,” Barrios said of Sale. “Dade Christian is a fastball hitting team, and he’s got a cutter and a slider, and it works. You know what too, he’s a bulldog. He is a complete bulldog for a ninth grader. I had to make some moves and bring some guys in because these guys let their emotions get in front of their play. Sometimes you have to take a bullet, but we saw some good things. We play them again and they might see little Jordan Sale again.”

The Crusaders got things going from the first pitch. Munoz helped his own cause by drawing a leadoff walk, and then advanced to third when Luis Reyes bounced one past third base for a double. The top half of the lineup was patient all night, and that started there as David Seijo and Nik Haber were patient to work the count and draw walks to push Munoz home for the 1-0 lead. Reyes scored on a passed ball to increase that margin.

David Diaz scored after opening the second with a walk and then scoring on a bases-loaded walk. With Munoz at third, Reyes at second and Seijo at first, Haber delivered the back-breaker by ripping a 1-1 pitch past third and deep to the far left field corner. Haber took the bases-clearing double to stack his RBI total at four on the night. 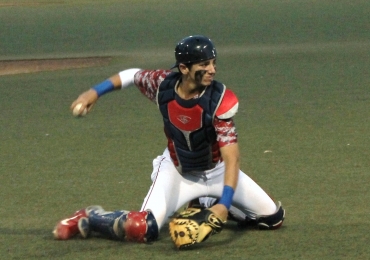 Spartans catcher Juztin Gross was 3-for-3, and anchored a defense that did not commit an error on the night.

Reyes also had a big day at the plate, going 3-for-4 with two runs and a stolen base.

“Coach Nalepa was telling us to stay inside of the ball, so I was putting that in play, and a lot of us were doing the same thing,” said Reyes. “Everybody was in it, we were all putting the ball in play and we were all excited. But we need to keep that going throughout the whole game.”

Coach Rodriguez agreed that his guys grew too comfortable with their early lead, and relied too much on their pitching staff to hold that lead. He intends to focus on that next week in practice, so the batters will learn to keep fighting to score more runs.

For the meantime, the team can take the moment to savor the victory and enjoy the early positioning at the top of the district standings.

“Playing in the Game of the Week, I love the exposure for the kids,” said Rodriguez. “It’s a great time, especially with Country Day. They are a well-coached team, a professional, good staff and we always have a good time with them.”