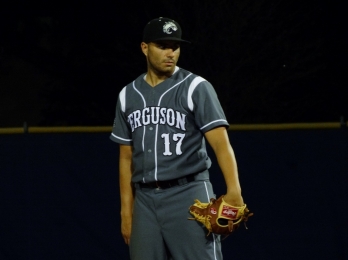 Fans attending Tuesday’s night ballgame at Flamingo Park, located in the heart of South Beach, witnessed an offensive explosion as Ferguson soared past Miami Senior by a score of 12-1. The Falcons (2-4) saw their bats finally wake up against the Stingarees, in a contest that was close early before Ferguson blew things open in the middle innings.

Through the first two innings Miami starter Jose Barrios was in control. But in the third inning there began a different story. Ferguson Manager Jose Novas stated that his team made an adjustment after the second inning.

“He was a crafty lefty, that was trying to dominate the outside of the plate,” said Novas. “So, we made an adjustment, waiting a little longer for the ball and we focused on hitting the ball back through the middle, the other way.”

The motion from the lefty, once deceptive and unpredictable, now appeared to be decoded by the Falcons Manager advice. The second time around, they were able to hit safely seven times in a row, including three doubles and a triple, for a total of six runs on eight hits.

The Falcons crowned the offense eruption with five more runs in the fifth to put the game in mercy-rule territory. They were aided by the ability to get on base of leadoff hitter Eduardo Zabala and the timely hitting of shortstop Javier Valdes, who was 3-for-4 with a double and a couple of RBIs.

“After my first at-bat, and recognizing the speed of the pitcher, I had to make an adjustment,” Valdes said. “I think I did a pretty good job of staying back and trying to go the other way.”

The talented sophomore has really high expectations for this season. He said that he believes he could be the best shortstop in Miami-Dade County.

On the other side of the ball, Falcons starter Alan Saumell was nothing short of spectacular. He only allowed an unearned run in the first, ending the game with seven strikeouts and only three hits allowed. 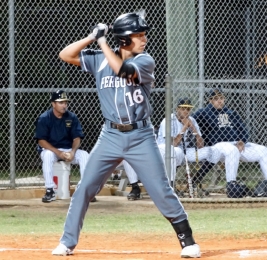 The talented sophomore Javier Valdes, was on fire all night long.

According to Saumell, he tried to keep calm and to settle down after the first inning, when the host Stingarees (4-2) scored an unearned run to erase any hope of a shutout.

His control was remarkable, and through the whole game he kept opposing batters fooled by his mix of sliders and two-seam fastballs. His out-pitch, a down-hill curveball, was nothing short of nasty all evening.

“The curveball is my strikeout pitch; I rely on it to settle my fastball,” Saumell said. “I am like no other pitcher. I like to pitch from behind. I like to start people off with curveballs and then throw the fastball.”

Novas is going through a rebuilding phase with his team, with only two returning starters from a season ago. Even so, his expectations are not far from years past.

“We always expect to compete for the district title,” Novas said. “But, I’m more concerned with this young group on getting better on a daily basis. We are a long way from a district title. But if we keep working, we have some young talent.”

For his part, the Stingarees Manager Frank Suarez said his team was not there yet.

His team, even after the blow-out, has a record of 4-2 and is in contention in the district.

“We expect to make the district play-off and advance to the next round,” Suarez said. “That’s what we hope for. I know we can play better that this.”