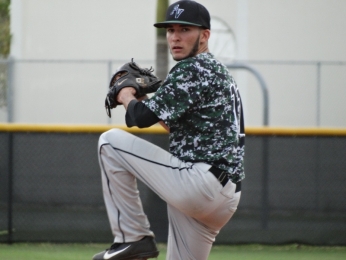 Nicholas Leon was the winner in a pitching duel with Christian Grullon.

Valera’s Nicholas Leon and Coral Reef’s Christian Grullon couldn’t be any more different. The Vipers pitcher, a righty, has a slim physique and relies on his control and breaking pitches. On the other hand, the Barracuda hurler has an imposing body, an intimidating fastball from the left side, and even pitches with a funky delivery.

The differences didn’t matter on Thursday at Coral Reef Park. The common denominator between the pitchers was simple: they both pitched a great ballgame.

Varela got the best of Coral Reef 1-0, in a District 8A-16 game that could shape the season for both teams. The Vipers improved to 2-2 in the district, keeping them right in the thick of a tight and competitive race.

The only score of the game happened in the top of the fourth inning. After Grullon retired the first batter by strikes, center fielder Chris Allende got on base on a bobbled ball. He advanced to second after the pitcher picked him off the base, but the throw to second hit him on his back. Hector Vazquez then got to first on a walk and Tony Mejias hit an infield grounder that looked as an inning saving double-play, but another error on a throw to third scored Allende to give the Vipers (3-3) a lead they would make hold up throughout.

Viper’s Manager John Barbato said that they had to tip their hat to the opposing pitcher, who threw a great game and had his offense handcuffed for seven innings. 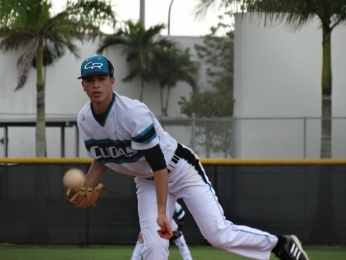 Christian Grullon pitched a near perfect game on everyone's book.

“If that play hadn’t happened on the throw to third base, we will still be playing baseball,” said Barbato.

Valera’s Leon did his part too. He kept the ball down and worked the corners, mixing his pitches and keeping the Coral Reef (0-7) hitters guessing the whole game. He finished the shutout victory with only four hits allowed, no walks and four strike outs.

“I was hitting my spots. I had a really good defense behind me that made a lot of clutch plays,” Leon said. “My coach called a great game. My curveball was working; I could throw it for strikes. That’s all I need, to throw strikes.”

Grullon took the tough loss, although the senior lefty was dominant from the first pitch in mixing his fastball with a great curveball that kept the Vipers hitters off balance. Grullon threw a complete game, surrendering only a couple of hits and an unearned run, while walking two and striking out nine.

“It is tough not getting any back up, but you can’t really give up on your team,” Grullon said. “Believe me it is not over, we could easily get on a run for the next eight games and get into districts.”

Leon seemed to be in trouble in the fifth. The inning was started with a hard line drive to left field by Benito Varela. After a sacrifice bunt that advanced him to second, pinch-hitter Nate Rosa hit a sharp blast to center on the first pitch. Leon kept his composure and went back to work striking out the next batter and getting a groundout for the last out.

The righty capped the shutout with a 1-2-3 seventh inning, which took the last breath of hope away for a comeback. 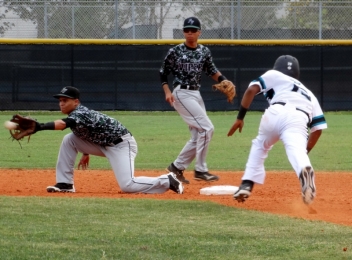 The Viper defense helped their starter Leon by throwing out two potential base stealers.

“We played a great game defensively. We could have executed a little better offensively, getting some bunts down and moving some runners over,” Barbato said. “Sometimes it is better to be lucky than good. You have to be happy when you win ballgames like this.”

The Vipers catcher, Hector Vazquez, was great defensively in catching two runners on the bases to set the tone for a tough defense.

Coral Reef Manager Ernie Padron said that it was tough to waste the performance of his pitcher.

“We have to play small-ball since we don’t hit as good as some other teams, but we have to execute it, and today we didn’t,” Padron said. “We have to grow from this, so we can play with anybody.”