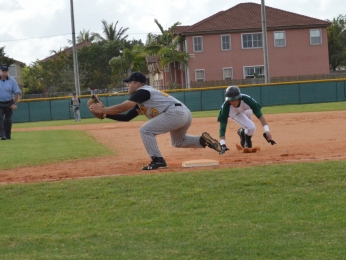 Felix Varela’s Chris Allende dives back to first base as Miami Sunset first baseman Anthony Padron waits for the throw during a game on Feb. 20.

A trio of sophomores came through with clutch performances in their young varsity careers to lead Felix Varela past Miami Sunset, 8-7, in a highly entertaining 8A-District 16 clash on Thursday afternoon.

Chris Allende racked up three hits and four RBIs, Franco Velasquez smoothly handled relief duty on the mound and Tony Mejias delivered the pivotal hit as the Vipers (2-2) rallied past visiting Sunset (2-3). All three youngsters belong to the class of 2016.

“The young guys are coming through, which is great. I love that,” said Varela Manager John Barbato.
With both sides sporting young rosters, hiccups in the field and on the basepaths were evenly distributed.
“They’re young; we’re young.”

Varela has only two players with varsity experience.

Varela showed plenty of determination while erasing deficits throughout the game. The Vipers finally took their first lead when Mejias smacked a clean single into left field that brought home Ben Murray with the go-ahead run in the bottom of the sixth.

The hit was made even more impressive considering Mejias delivered it on an 0-2 pitch with two outs. Despite being behind in the count, Mejias said he tried to remain calm.

“Everybody says they get nervous,” said Mejias, who also had a double. “I have to admit I was kind of nervous, but you just have to stay in the moment.” 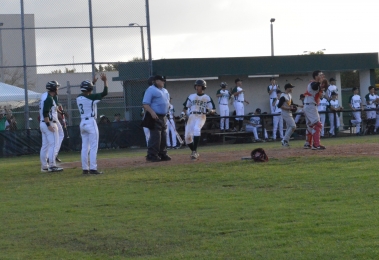 Nursing a one-run lead in the top of the seventh didn’t rattle Velasquez. The sophomore right-hander, who relieved starter Nicholas Leon in the fifth inning when Varela trailed 6-2, retired the side in order in the seventh to notch the victory. He received help from second baseman Oscar Gomez, who made a SportsCenter-worthy game-ending diving catch to rob Robert Hernandez of a base hit.

Gomez, a junior, had a strong game out of the nine-hole in the order. He had two of Varela’s 10 hits.

In addition to Mejias and Velasquez, another encouraging sign from Varela’s sophomore class came from Allende, who went 3-for-4 with four RBIs. The combination of quick hands from the left side of the plate and fast feet helped Allende clear the bases on a triple into the right-center gap in the fifth inning.

Varela’s four-run fifth, which included an RBI double from catcher Jonathan Bermudez, wiped out a four-run deficit after a shaky top half of the inning. Varela had a chance to emerge unscathed, but a catch-able foul ball with two outs wasn’t reeled in. Sunset quickly pounced with four runs, highlighted by a pinch hit RBI single from Marc Romero and back-to-back run-scoring singles from Jorge Ricardo and Alfred Labrada.

Sunset was aggressive on the base paths, which paid off when Alfredo Iser took off from second base and never stopped as he raced home on a passed ball that gave the Knights a 7-6 lead in the top of the sixth. 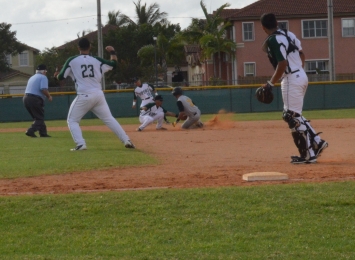 Sunset, which has scored 30 runs in five games, wasn’t able to hang on to three different leads.

“We have a young team,” said Sunset Manager Armando Pelaez. “Lack of discipline right now. It’s going to be a learning process. It’s going to take awhile for them to start playing as a team. We made a lot of mental mistakes, missed a lot of signs. It’s tough early in the season. Everybody is getting an opportunity to play. We don’t have a set line-up right now. We’re trying to see who is going to take charge and earn their spot.”