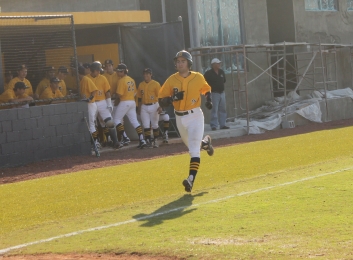 Alex Cabrera rounds third base after hitting a three-run home run in the second inning.

Belen Jesuit Manager Jerry Albert is pleased with how his team has begun this 2014 season. The Wolverines have played consistent, they have learned from their mistakes and they have worked to correct them. Everyone is working hard and respecting the game, and there is nothing else but to be pleased in them.

Tuesday afternoon brought a reward for all the hard work, as Belen grabbed a big 15-1 district victory over Homestead. The Wolverines worked a big first inning and stayed in control to improve to 5-3 overall and 4-0 in 6A-16.

It was a big home victory for a Belen squad that was able to put everyone into the game to contribute.

“It’s just one of those games where everything was good for us,” said Albert. “I always like when we can get a lot of kids into the game.”

It was a monster first inning for the Wolverines, as they sent 14 batters to the plate and scored a dime by the time it was over.

“It’s definitely a testament of what our team really is,” said shortstop Alex Cabrera. “We believe in each other and we just take it one step at a time. You just let the runs come in. One by one, and then when you notice, you have all those runs in an inning. But you just keep it going hit by hit.”

Cabrera, Christian Del Castillo and David Guevara all reached leading off to load the bases for Javier Herrera. The catcher plunked a 2-1 pitch into right field to clear the bases and deliver all the run support the team would ultimately need. Cabrera would add an RBI single later in the frame, and Del Castillo followed that by smoking the ball off the right field fence for a two-RBI double.

“If we could have gotten out of that first inning it may have been a different ball game,” said Broncos Manager Bruce Berman. “That first inning killed us. We gave up ten runs, two walks and hit three batters in the first inning alone. After that we gave up only five runs and we hit the ball pretty well. We had base runners but we just couldn’t capitalize on it.” 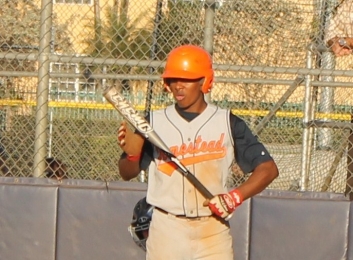 JanCarlos Silviero had the play of the day on defense, and went 2-for-3 with two stolen bases for the Broncos.

After the first inning Berman told his players to treat things like it was still a scoreless game and approach it to win an inning at a time. For such a young team facing a tough bump in the season, the Broncos (5-3, 2-2) responded to show their character and determination.

Robert Gramley hustled on a grounder and then kept going to turn it for two when the ball was misplayed. Emmanuel Zarzabal then drove a shot to right field to push Gramley around third and across the plate to end the shutout. Even though Homestead was unable to pull any closer, the club was able to put runners on in every inning and show plenty of fight despite the large deficit.

“We’re young but I think we can play with them,” said Berman. “We preach hustle, and we may not be the most talented team, but we’ll scrap and fight. It’s a long season and we’ll build on it.”

Perhaps no one showed that fight for Homestead more than shortstop JanCarlos Silverio. During that tough first frame the senior made an impressive catch on a foul ball to record an out when the team desperately needed one. As the foul drifted at a tough angle along the third baseline, Silverio sprinted after it and reached out to snare the ball in a glove stretched as far as it could over the fence. For his effort he also slammed his ribs into the fence rail, taking the impact to make the catch for his team.

“The popup was high and I didn’t look down. I just caught it and when I looked I was on the fence already,” Silverio said. “We never give up. I am just running after every ball I see and trying to catch it to do what I can.”

Silverio followed that up with two singles in his next two at bats, reaching in the third when he used his blazing speed to beat out the throw when an infield grounder took a strange bounce to slow the fielder, and then also beating out a slow roller to third base to give the Broncos their final chance in the fifth. It didn’t stop there though. Each time Silverio reached base, he wasted little time in trusting his great speed and stealing second.

“I don’t feel good standing on the base. I want to move and I want to run,” Silverio admitted. 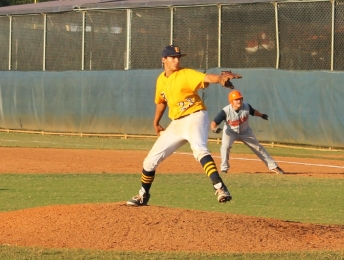 Despite those chances, the Wolverines made the plays to avoid any chance of a comeback. Starter Andres Fernandez induced an infield grounder to escape a bases loaded jam in the second, and the defense added a 4-6-3 double play in the fourth.

After Homestead scratched a run across in the top of the second, Cabrera ended all doubt to put all the momentum back with the home club with one monster swing. Michael Gomez and CJ Vazquez both walked to turn the order back over, and on an 0-1 pitch Cabrera waited for the ball to travel deep into the zone and connected cleanly for that perfectly-timed swing that any hitter knows the minute the bat hits the ball. That ball then soared clear over the left field fence for a three-run home run.

The Wolverines scored in each of the next two innings, before the game ended in the fifth via the mercy rule.

Belen also used four different pitchers and got solid production from each one.

“Today was good because we were able to get the pitchers on the mound and everybody on for an inning, give us a chance to pitch some kids that hadn’t pitched the last few games,” Albert said. “The last kid that pitched was throwing for the first time ever in a high school game. We think he will be pretty good for us down the road. It was a good game for those types of things.” 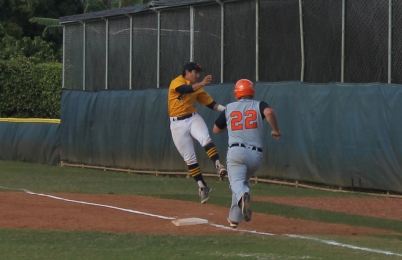 Robert Gramley reaches first as Christian Ayala attempts to catch a high throw on a big collision at first base in the second.

With everything going the Wolverines way, the coaches took the chance to let the players enjoy it together by letting everyone get into the game and contribute to it. As many as seven non-starters were able to bat, and each played their part. Both Albert Maury and Alex Falla reached base with two outs, as Maury stroked a pinch-hit double in the third and Falla worked a pinch-hit walk in the fourth.

Belen added its final run when Jose Chegwin drew a leadoff walk, Tonito Galvez followed with a double into the left field corner and Ivan Botero put the ball in play for an RBI groundout that scored Chegwin.

It was a day where everything was clicking for Belen. It was a rewarding home victory, where the team is quickly proving to be tough to beat with a 3-1 record. But they also know they will face this district foe again later in the year at their place.

“I’m sure the next time we play them it will be a lot closer,” said Albert. “Last year when we played them down at their place it was a real close game for much of the game. So we know what to expect with them.”