Gators Bite Into The Chiefs 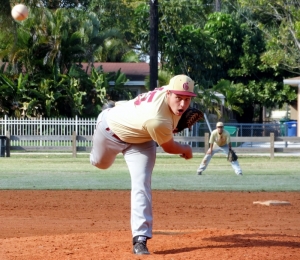 Ricardo Garcia's day was as close to be perfect as a no-hitter can be.

Is there any way to surpass an offensive carnival that scored 19 runs in one night? How about a no-hitter? That’s just what Goleman  Ricardo Garcia did. The Gator right-hander was able to overshadow the display of the bats behind him, and cruise to a 19-0 victory over their district rival Carol City (0-5).

The 6A-15 showdown paired the leading Gators (8-1), now undefeated in four district games, against the Chiefs that have not been able to secure a win in three chances.

Garcia was never close to be in trouble through the no-hitter. He pitched five innings flawlessly, striking out nine Chiefs and losing the perfect game in the second on a walk.

“My confidence is always up there,” Garcia explained. “I believe that I can do it all the time but there are some days that it does not happen.”

Today was not one of those days. His performance was aided by his team offense that showed up hyped to provide a boost after Friday loss to Sunset, their first one of the year.

“We did pretty well today after the loss on Friday. We were able to bounce back,” said Goleman Manager Jose Lopez.

The Gators showed patience, gap power, a great defense, and were able to take what their rival gave them. Goleman worked eight walks, combined with over a dozen stolen bases to create the run machine.

“We run, run, and run and pressure the other team. If you can make the plays, you’ll be able to come up on top,” Lopez stated. “We run on everybody and it paid off today.”

“Ricardo Garcia did an outstanding job today on the mound,” Lopez said. “He was hitting the strike zone a lot and the hitting came along with it.” 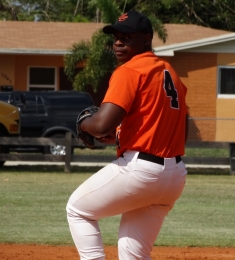 The Chiefs pitching couldn't tame the bats of the Gators.

The offense from top to bottom was on fire this night. The third inning was the catalyst and defining moment of the game, in which Goleman scored eight runs and put the game out of reach.

For the Gators Jonathan Jhones, who is hitting over .500 and is in a toe-to-toe fight with his teammate Erick Delgado for the district batting crown, was a leader. He was 3-for-4 and drove in the last two runs of the third inning with a triple.

“When the season started, my goal was to hit over .500. I try to hit my best, hit the gaps. I try to help my team all the time.” said Jhones.

Manager Lopez was pleased with the effort of his squad Monday.

“The guys have responded well, they train hard to get somewhere,” Lopez explained. “Our expectations are to defend our district title and keep moving on from there.”

Chief Manager Randy Rodriguez is placing his hopes on the future.

“All you can do is learn from your mistakes,” Rodriguez said. “It’s a rebuilding effort for us this year and next year.”