Bulldogs starter Marc Anthony Suarez earned the victory by striking out 14 in six innings on Wednesday.

It is a great feeling for a hitter to come to the plate with some ducks on the pond and get the job done.

In a tie ball game, Hialeah Educational Academy’s Tony Gonzalez came to the dish with a pair of runners on base and two outs in the books. The Bulldogs catcher wasted no time, jumping on the first pitch to drive the ball straight up the middle and plate both runners for the deciding runs. Hialeah Educational held on from there to score a big 4-1 victory over Miami Country Day, in a District 3A-15 contest played Wednesday afternoon at Slade Park in Hialeah.

“What I’m looking for in that at bat is a first pitch strike, a fastball,” said Gonzalez. “I knew I had runners on first and second so I knew I had to be clutch, and my instinct was that the first fastball I see down the middle I am going to hit it. That is exactly what happened.”

The Bulldogs (7-4) improve to 6-0 in their district, while maintaining a firm hold on the top seed in the process. The four-year old school is competing in a district for the first time this season, and so far they have yet to lose a district game in program history.

“Our goal is just to win our district,” said Bulldogs Manager Manny Pazos. “That’s what we are trying is to go undefeated in the district. Any other game that is non-district is just practice to get us ready for our district.”

Even though the Bulldogs won handily the first time they faced the Spartans (3-6) earlier this season, the second time through proved to be a much tougher outing. Country Day got a strong start from sophomore Jose Oronoz and also had a lot of success swinging the bats to make this a battle right down to the very end.

Oronoz went the distance for his club, taking a tough loss despite a quality start. The young right-hander was efficient with his pitches and shook off every threat with poise and confidence. Oronoz was able to work his way through a tough Bulldogs lineup to keep his team in the contest, while scattering seven hits and two walks and recording four strikeouts. 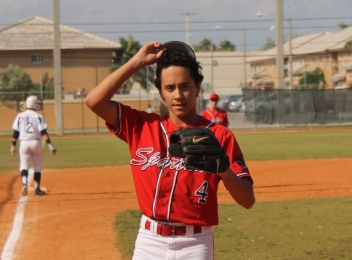 Sophomore Jose Oronoz went the distance on the mound for the Spartans, striking out four in the quality start.

“We had our opportunities there,” admitted Spartans Manager Paul Barrios. “I think we left bases loaded twice, but Oronoz kept us in the ball game. Our sophomore went six innings on 80 pitches, so that makes me happy. Listen, it was not a win, but like I told my guys, this is probably the most complete game we’ve played even though in a loss. You know, it was a great ball game and I am happy because I think this will spring us forward to better things.”

The Spartans have struggled of late to go on a lengthy losing streak, but the players showed none of those struggles on Wednesday. They came out swinging to grab an early 1-0 lead in the first inning, when Steven Soriano roped a first-pitch fastball deep to right-center field for an RBI double that scored Juztin Gross. Gross had reached base on a fielder’s choice that erased leadoff man Michael Fente, who lined a single to shallow left field to start off the ball game.

After falling behind early, Bulldogs starter Marc Anthony Suarez settled in to deliver a strong outing that earned him the victory. The right-hander went six full innings on 111 pitches, working ahead in most counts while mixing his pitches and locations to keep the batters guessing throughout.

“He pitched against us last time and he is a senior who has real command of his two pitches,” said Barrios. “He moves his fastball in and out and he throws a curveball, which is a lot slower.”

Suarez (5-1) loves to live off of his fastball, but on this day it was a pitch that just didn’t seem to be working for him. Therefore, the senior adjusted his approach and went to some of his other pitches to help set up his fastball instead. The approach worked well in keeping him in control of the Spartans lineup, while still leaving a lot of bite in his fastball even into his sixth and final frame.

“Sometimes when things don’t work out, you gotta fall back on your other pitches,” said Suarez. “The fastball wasn’t working; I wasn’t getting my normal speed, so I adjusted to some curveballs and sliders and mixed in some changeups. They always tell me, after the third or fourth inning I get stronger, but I don’t see it. It always happens, and I don’t know why and I can’t explain it. I just throw, pitch and get my outs and say let’s win the game.”

Gonzalez also noticed how his ace starter trusted more in his curveball than he normally does, and he admitted that Wednesday may have been the best control Suarez has ever had of his secondary pitch.

“Usually he has more control with his fastball, but today he felt better with his curveball,” said Gonzalez. “He was just making them crazy, and that’s what I like as a catcher. He had them in control and I like for him to adjust every time. At times, when he would be a little bit faster, I would tell him to slow it down, calm down and adjust pitch by pitch. That is what worked for him and that is why the game went so fast.” 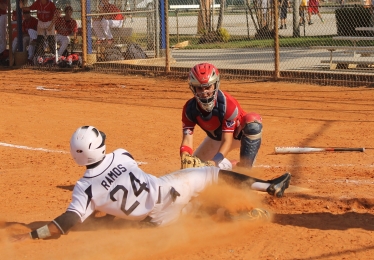 Suarez attacked the Spartans batters without malice, working his way out of a few late scoring threats to stay ahead. Twice he struck out the side in an inning, and he finished with 14 strikeouts in all.

On two separate occasions the Spartans managed to load the bases, but each time the Bulldogs found a way to get out of trouble unscathed. Gross and Adam Seif both singled with two outs in the top of the third, and Soriano drew a walk to load the bags, but Suarez responded with a strikeout and a bloop popout to end that threat.

Two innings later the same sequence of events occurred, as both Gross and Seif connected for their second singles of the game and Soriano drew his second walk to again load the bases. This time Suarez got a bouncer right back to the mound, and he quickly fired the ball home to Gonzalez, who then rifled it to first baeman Christopher Liriano for an inning-ending 1-2-3 double play.

With Suarez’s pitch count high, the Bulldogs elected to turn things over to closer Victor Fleites. Although Fleites surrendered a single to Blake Colongo and a walk to Gross to bring the tying run to the plate, the right-hander shook it off to record the final two outs and pick up his second save of the season.

“Victor is like my brother and he helps me out every time when I can’t come out anymore,” said Suarez of his closer. “I was ready to go and I talked to my coach but he wanted to protect me. So I just tried to help out my brother, tell him what he has to do and how I’ve been getting them out, then do it and let’s go get the win. It’s amazing; it’s something we were all fighting for since last year, trying to get into a district this year. Right now we are undefeated and I got four of the wins from starting pitching, and we are doing what we have to do.”

With the pitching staff taking care of their business, the Bulldogs offense stepped up to do their part in coming back for the victory. Anthony Tedesco got things started when he sent the ball on a strange hop past the shortstop for a leadoff single in the third inning. Bryan Pazos dropped down a great sacrifice bunt to move his runner over, which actually led to Tedesco racing to third when he alertly realized the base was left open after the third baseman had to charge the ball to make the play. Danny Ramos walked to keep things going, and Tedesco took home on a wild pitch to even things up at a run apiece.

The Spartans seemed to grab the momentum back by making a big play to follow. Peter Baldrich singled up the middle, and when the fielder bobbled the ball Ramos rounded third and took off for home. But the defense recovered to fire the ball home in time to record the out at the plate and momentarily keep things knotted up. 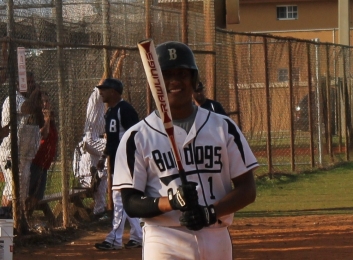 On a beautiful day for baseball, Bulldogs third baseman Jeffrey Zamora set the best example by smiling and enjoying every moment of it.

Alfredo Barroso came to bat next, and the left fielder wasted no time in shifting the momentum back to the home squad as he stroked a shot to right field for a double that put both base runners into scoring position to set up Gonzalez’s big hit. Barroso added his second double of the contest two innings later, when he crushed a shot to center field on a perfectly-executed hit-and-run that drove in an insurance run from Ramos. Ramos broke for second on the pitch and was able to come all the way around when Barroso sent the ball deep to the outfield, earning the run after he singled with one out to set up the scoring play.

The Bulldogs have all but assured themselves of a spot in the district playoffs, but the team is not content to stop there. Their goal all season has been to win every district game and then carry that momentum into the district playoffs and chase after the program’s first district title.

Even though most of their district contests have now been played, Hialeah Academy knows things will only get that much tougher as the season draws on. Although the team has gone just 1-4 outside of 3A-15, these games have allowed them to tinker with different alignments and work to prepare for the games that matter the most.

“I think the goal is just to play baseball,” said Coach Pazos. “Every day we have to try to play better than the other days; maybe we have a win, but in baseball anything can happen.”