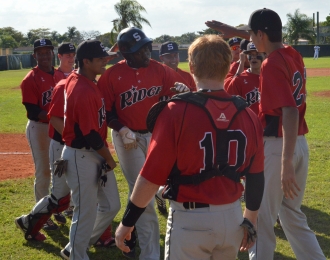 After belting a solo home run, Jamar Criss is greeted by his Southridge teammates during the Spartans’ 4-1 win against Miami Sunset on March 4.

Just when it looked like Miami Sunset was poised to pull off an upset in 8A-16, Southridge found the late spark it needed in the field and at the plate.

After somehow emerging unscathed from a two-on, nobody out jam in the bottom of the sixth inning, Southridge snapped a 1-1 deadlock in the top of the seventh on its way to a 4-1 win on Tuesday afternoon at Miami Sunset High.

“Like our coach said, we came back from the jaws of defeat,” said Southridge starting pitcher Octavio Mirabal, whose solo home run to lead off the seventh gave the Spartans their first lead of the game. “They looked like they had us beat, not only by the way they were playing, but also their attitude. It took a spark for us. I guess that home run was a spark.”

Mirabal was relieved on the mound in the sixth, but he remained focused at the plate. His shot to dead center came on a first pitch fastball from Sunset starter Danilo De Armas.

“After I came out, I still kept the same positive attitude that I had when I was pitching,” explained Mirabal, a senior who said he is considering offers from Central Florida and Oklahoma. “I was hoping for a good first-pitch fastball that I could drive up the middle. I got a good piece of it.”

Mirabal’s first home run of the season was one of the few times Southridge (6-1, 3-1) made solid contact against De Armas, a 5-foot-6, 150-pound smooth-throwing senior who baffled Spartan batters by mixing speeds during an impressive battle against fellow southpaw Mirabal. Southridge had racked up 31 hits and 24 runs in its past two games, but was held to just three hits and one run through six innings. 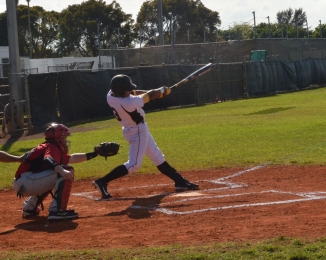 Miami Sunset’s Alfredo Iser delivers an RBI single in the first inning against Southridge on March 4.

De Armas did not give up a walk, but perhaps the most impressive part of his six and two-third innings was that six of his eight strikeouts came against Southridge’s potent top five batters.

“We couldn’t solve the lefty,” said Southridge Manager Ed Doskow, whose squad will host undefeated South Dade in a key district showdown on Thursday. “I thought we had two great days of batting practice, but hats off to that kid. He’s a great pitcher.”

Sunset took a 1-0 lead in the first inning when sophomore Mike Rodriguez (2-for-2, double, walk, run scored) drilled a stand-up double into left field and scored on a single from Alfredo Iser (2-for-3, 1 RBI).

Southridge answered back in the top of the second when junior first baseman Jamar Criss launched a solo home run to left. Criss was 2-for-3 on the day.

Thanks to the pitchers’ duel, the game remained knotted at 1-1 until the seventh.

Mirabal struck out the side in order in the second. Both pitchers needed just nine pitches in the fifth.

Sunset (3-5, 1-4 District 8A-16) generated nine hits and quality scoring chances, namely in the third when the Knights loaded the bases with one out and did not score. In the sixth they were unable to score after putting runners at the corners with no outs. The latter jam is when reliever Isaac DaSilva came into the game. He promptly notched a strikeout, and then a double steal attempt turned into an inning-ending double play, capped by a tag at home plate by catcher Austin Peterson. 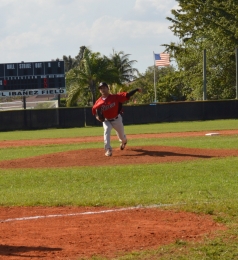 Southridge senior southpaw Octavio Mirabal delivers a pitch during the Spartans’ win, and he also blasted a go-ahead solo home run in the seventh inning.

After Mirabal’s homer, Southridge padded its lead thanks to an RBI single off the end of the bat of Josten Heron.

Despite De Armas’s strong effort on the hill, Sunset suffered its third loss by a margin of three or fewer runs. The Knights know they cannot afford to let any more stellar outings pass without a victory.

“(De Armas) did a good job today,” said Sunset Manager Armando Pelaez. “We just couldn’t help him out with runners in scoring position. We couldn’t get the big hit, and we ran ourselves out of another inning. We just can’t put seven innings together.”

Sunset’s next chance to start making a move in the district standings will come Thursday at Palmetto.

“We need to get back into it,” Pelaez said. “It’s a tough district. Very competitive. We keep giving games away and we’re getting deeper into the hole. We’re beating ourselves. That’s the worst thing about it.”