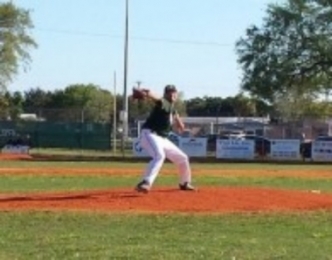 A game that started as a pitching duel between the Mater Academy Lions and TERRA Institute Wolves turned out as an easy win for the Lions in this 6A-16 matchup.

The visiting Lions (5-1) came to the meeting riding a four-game winning streak, after losing its first game of the season. Manager Mike DiRosa says the key has been his guys playing more as a team and not trying to do things individually.

“The changes that we made were just that guys started playing more like a team,” said DiRosa. “Guys started understanding what they needed to do with their swings. That first game we played terrible, too big a swings, a lot of ‘me-ball’ and not a lot of ‘team-ball.’ Ever since then its been a change in actually the players themselves that have taken upon themselves to want to work and play as a team.”

Playing more as a team has helped the Lions in tremendous ways. During this five-game winning streak the Lions have outscored their opponents 45-10.

For this 6A-16 showdown DiRosa chose to go with the senior lefty Mike Mediavilla, against the Wolves Tyler Prichard. The first two innings demonstrated this would be a pitchers duel with both pitchers throwing two solid frames.

Mediavilla allowed the first run of the game during the second inning on a heads-up base running play. Reuben Pino attempted to steal third and scored from second on a bunt down the first-base line by Nick Wylder that Mediavilla could not arrive on time to cover the bag. That is all Mediavilla would allow on the day, striking out three and allowing two hits and three walks the rest of the way.

Mediavilla went four solid innings, striking out five in all while allowing three hits and three walks for the win.

“My plan today was just to hit my spots pretty much,” said Mediavilla. “I wasn’t feeling too good so I just knew that today was just going to be a day to go off speed and hit the corners. It wasn’t a bad day, but it could’ve been better. But next time I just have to start hitting my spots more.”

For the Wolves the first two innings consisted of solid and sound baseball. Then came the third, where the Lions would hit around the order for four runs.

After the first batter of the inning was retired Alex Rodriguez started things off with a double. Things went south for the Wolves from there. The Wolves defense committed two errors that would have ended the inning without the Lions scoring a run. Instead the Lions scored four following an errant throw that plated Rodriguez, a sacrifice fly from Danny Reyes, a single from Chris Cabrera, and a bases loaded hit-by-pitch to Joel Jimenez that scored Mediavilla. 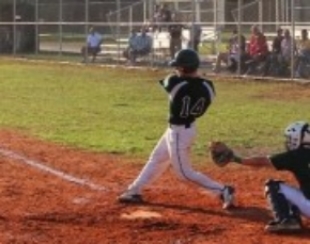 In the fourth, Manager Hernan Adames went to his bullpen and brought in Octavio Marin following a hit-by-pitch to Michael Escarra. The Lions added on two more runs before Marin got the final out. The first run scored on a two-out single by Mediavilla and another on an error from the defense on a steal that allowed Danny Reyes to score.

The Wolves bats seemed to come alive during the fifth, after Adames brought in all his bench players. Adames said he believes switching up players allows him to find the identity of his team. He believes his team is still searching for it’s real identity, searching for the right combination of players to achieve offensive and defensive needs.

The Wolves managed to have runners on second and third with one out hoping to chip away from the six-run lead. Jose Varela led off the inning with a double and Alex Saavedra later added a single trying to build a rally. Lions pitcher Tyler Perez got out of the jam when Marlon Sobalvarro hit the ball back to the mound and Perez was able to get Varela caught between third and home.

After a quick sixth inning where Perez retired the side, the Wolves came back in the seventh trying to put a stop to their losing streak. DiRosa brought in Chris Rodriguez to finish the game, but the Wolves weren’t going to give up just yet. Angel Mestre led-off the inning with a double to deep left-center-field and, after two quick outs, the Wolves were patient at the plate and piled up four walks in a row to score two, before Rodriguez finished the job.

The Wolves (3-4) have struggled as of late, losing their last three games after starting 3-1. Adames and his staff are the first ones to see the potential in their squad but say it’s up to the team to believe in themselves.

“These guys have to believe like the coaching staff believes that they can play,” said Adames. “We came out in the first district game against Doral and we were able to scored a lot of runs. It was a 13-1 ball game, and then great pitching the next two games in districts and we lose to Belen.”

The pitching staff has been present but the defense hasn’t been up to par.

“Last night the unearned runs hurt us against Columbus, today against Mater unearned runs also hurt us early in the game,” said Adames. “The pitching staff has been the key and we’ve been doing a good job but the defense, which we really work at it hard, has to pick it up.”

The Lions look to keep the winning streak going next in a non-district match-up against the Gulliver Prep Raiders, while the Wolves look to bounce back against the Homestead Broncos in a 6A-16 match-up.