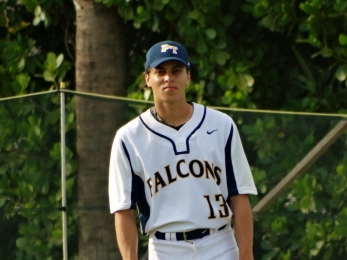 Jaime Sepulbeda was the star of the game on Wednesday.

Jaime Sepulbeda loves baseball, of that there is no doubt. That’s why he was kept as the official scorekeeper for the last couple of years for the Palmer Trinity baseball team. Wednesday afternoon was a little bit different. This year Sepulbeda decided that being on the sidelines was not enough, and he fought to make the team for his last year of school. Wednesday marked the highlight of his high school career, as he helped contribute during the Falcons 15-2 victory over Archbishop Curley.

It was a moment typically seen only in the movies.

Just like sports movies don’t disappoint, Sepulbeda’s nerves and his bat also didn’t. His swing was calculated and for a second everyone on the field that was familiar with his story enjoyed the instant just as much as he did. The result was a double to the gap that drove in a run.

Falcons Donnie Harvey said everyone was cheering for Sepulbeda. He added that he was really proud of his pupil and considered him an important part of the team.

“Jaime didn’t play in his first couple of years. He decided he wanted to play this year, so that puts him behind a lot of the guys, but he has been practicing every day,” Harvey explained. “He is actually a really good hitter. We wanted to give him a chance to hit in the game.”

The ex-scorekeeper was submerged in the excitement of the moment, and couldn’t find the way to put into thoughts what was going through his mind.

The Falcons offense was on point throughout the game. They had to adjust to the pitching of the Knights starter David Diaz, who used an arsenal of off-speed pitches that unfortunately did not fool the Falcons (4-2-1). They scored fifteen runs in the first three innings of the ballgame on twelve hits and five walks.

The Falcons were led by Jarrett Pico, who was 3-for-4 with a double and three RBIs, and first baseman Dustin Philipp, who was perfect on three turns and drove in four of his teammates. 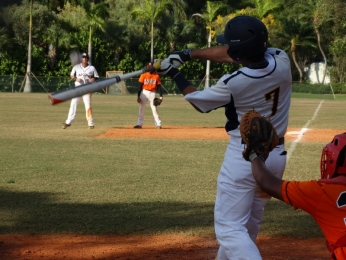 Jarrett Pico hitting one of his three hits to drive in a run.

After the game Phillip explained his strategy to face the opposing pitcher, saying that he felt he had to make the adjustment. He attacked the box and just waited for his pitch.

“I have been hitting really good so far, so it’s good to keep the momentum.” Philipp said.

The two run scored by Archbishop Curley (1-11) happened in the first frame of the ballgame. After leadoff hitter Karim Joseph got on base when he was hit by a pitch, he advanced to third on a solid line drive that fell for a hit off the bat of Jose Gomez. They both scored when Jordi Herrera hit a laser-sharp double to the right side. This would be all the offense on the game for the Knights.

Knights Manager Jerry Yeash, a veteran of over 30 years of experience, was not happy with the performance of his team. He blamed the results on the loss of some key players and the lack of baseball knowledge and experience of his squad.

Harvey was a happy man. He was able to showcase most areas of his team and also able to play a lot of young players.

“We had a crafty little righty throwing off-speed pitches, and our guys did a good job adjusting as the game went on,” Harvey said. “Trying not to swing for the fences, hitting groundballs and line drives. That is what you have to do against that kind of pitching.”