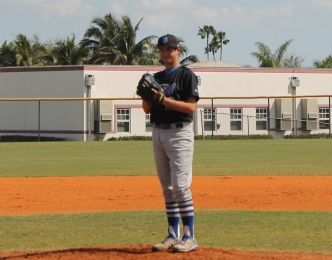 Edgar Abreu was almost there.

With one out remaining in a tight ball game, the Sagemont starter stepped off the mound a moment to collect himself. The Lions had reached a big point in a tough opening stretch, and Abreu needed just one extra second to collect himself before toeing the rubber and firing the last few pitches he needed to close things out.

Two tosses later shortstop Brynn Martinez recorded his fifth putout of the day to put the final touches on a big 3-0 shutout victory over district foe Westwood Christian, in a contest played Tuesday afternoon at Tequesta Trace Park in Weston.

“It helped me recuperate and get everything together, and just go at it for the last one,” Abreu said of his quick breather just prior to closing out his complete-game victory. “It went great in the bullpen and I just carried that over onto the field. I just try to do the best I can and hit my spots like my coach taught me. It’s a big win because it moves us up in the district and just helps us keep moving forward to try as hard as we can to get the next one on Friday.”

Sagemont improved to 4-3 overall, as well as in District 3A-15. The team is nearing the end of a very challenging opening schedule that has seen nothing but district contests, and they have begun to build some steam in winning their last three games.

Also pivotal in the results was the fact that the Lions have now defeated the Warriors (5-5) twice this year, after a lopsided road win earlier in the season. With Westwood hanging right in there at 3-3 in 3A-15, the tiebreaker edge could come into play before it is all said and done.

Although the outcome is not in their favor, Warriors Manager Julio Andrade is still quite pleased with the state of the program. Coming off their first state championship in their 54-year history last season, it has been a whole new group to don the uniform in defense of that accomplishment. Meanwhile, the FHSAA realignment also moved the team up into a tougher classification in Class 3A.

“Before the season started, let’s be honest, nobody expected much from us,” Andrade admitted. “We lost a lot of kids that defected to others schools and we lost a lot to graduation, and I was hired after school started. There were some people who said we weren’t going to win a game this year. We’re right where we want to be. Our goal is to win our district, and the first thing we have to do is make our district tournament. Right now we are middle of the pack, and all we have to do is finish in the top four. We’re 3-3 and we’re right where we want to be. I like the direction my team is going, and we just need to shore up a couple of mistakes we are making here and there and learn how to come through in the clutch. We’re going to be all right.” 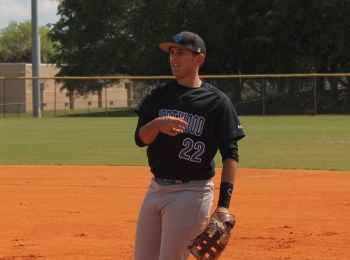 Adam Quinones went 2-for-3 to lead the offense on Tuesday.

Westwood struggled in two lopsided losses to start this season, but recovered to turn things around ever since. The team won five in a row before struggling of late, but even despite Tuesday’s loss the club is still beginning to come together to play their best baseball as a unit.

The primary area of improvement has been on the mound, where right-hander Nick Mejias made the start and delivered a quality performance Tuesday. Nick was aggressive in attacking the batters, working ahead in the count and challenging hitters. Even though the Lions were able to threaten several times, he avoided any damage until the fifth inning to keep his club in the ball game.

The problem was that Abreu was equally dominant against the Westwood lineup. Abreu needed just 71 pitches to go the distance for the first time in his high school career. The right-hander scattered five hits and recorded two strikeouts without issuing any walks.

“I think we pitched well enough to win, and except for a couple of botched rundowns we played a clean game. We just can’t seem to get a big hit,” said Andrade. “We battled and we stayed in the game, but the last couple of games our bats have gone silent. We were scoring about eight runs a game during our last winning streak, but the last couple it has seemed like we get guys on base but we can’t get that big hit.”

Lions catcher Stefan Revelo backed his pitcher with a crucial at bat in the fifth inning. Although things did not start so well for him when he came to the dish in the bottom of the fifth with leadoff man Brynn Martinez on first, the moment was a classic example of how one can fail in baseball and still bounce back to succeed.

Martinez led the inning off with a walk, and in a scoreless pitcher’s duel Stefan attempted to drop down a sacrifice bunt, but instead fouled the pitch off. Martinez broke for second on the next pitch and, after eluding a tag in a rundown, he managed to safely swipe the bag. The very next pitch he made a great jump on a ball in the dirt and also swiped third base to get within ninety feet of cracking the scoreboard.

Stefan’s job was a bit different by the end of his at bat, and after fouling a few pitches off he connected on the seventh offering and slapped an RBI single up the middle.

“He was a little aggressive early on and trying to go get the ball instead of letting the ball come to him,” Sagemont Manager Wesley Morejon said. “I tell him all the time that we’ll give you the first few pitches in the at bat if you’re going to be aggressive, but that two-strike pitch belongs to your coaching staff and it belongs to your team. He did a good job of staying with it the whole time and it paid off with a big hit.”

Sagemont used fundamental baseball to add a pair of insurance runs. Sean Iacono kept things going by zipping a liner up the middle, and Edison Rodriguez blooped a single to shallow right field to load the bases. Chris Iacono was patient following a pitching change, and that paid off with an RBI walk. Andres Vasquez then closed out the scoring with a sacrifice flyout that drove home Sean Iacono. 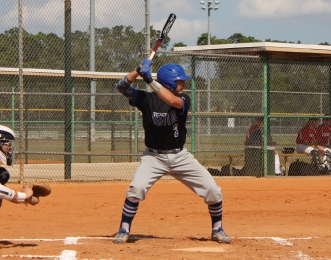 Kenny Goodrich was 1-for-3 and also reached on an error.

The Warriors had their best scoring chance in the top of the fourth. Kenny Goodrich reached on an error leading off, and Adam Quinones ripped a shot past the diving third baseman for a standup double that put both runners in scoring position. It was the second hit of the ball game for Quinones, who finished 2-for-3 while putting in three quality at bats.

“My teammates were swinging early in the counts so I tried to get a little bit deeper and just then sit on my back foot and hit the ball hard somewhere,” Quinones said. “We were hitting a lot of balls to the middle infield so I wanted to hit the ball into the gaps.”

Quinones is one of just three returning veterans to this otherwise young roster, and the state champion uses that experience to lead his new teammates. Quinones and fellow veterans Ken Prado and Matthew Fernandez have seen their share of tough challenges on the high school playing field, and their current challenge is to help prepare their teammates who have not yet had such an opportunity.

“I’ve been trying to lead by example and just do the job when it is given to me,” said Quinones. “I’m trying to tell the guys at a young age to try and mature, and not to take for granted the varsity experience that they’re getting at such a young age. Do the most they can with it.”

The Warriors showcased flashes of that ability on Tuesday, particularly on defense as they played error-free throughout. Right fielder Michael Mejias had a nice diving catch and then recovered quick enough to hold a runner on third base and erase a scoring chance in the fourth. Then Nick Mejias moved to right field after being relieved on the mound, and put in a great throw to Fernandez at the plate to gun down a base runner and end the only scoring frame in the fifth.