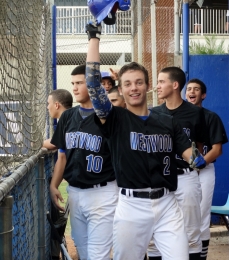 Kenny Goodrich poses after tying the game with a two-run-homer in the bottom of the seven.

Every sport has its peak of enthusiasm. football has the Hail Mary last second touchdown pass, soccer has the Golden Rule goal, and basketball has the buzzer-beater. Baseball, however, may have the most entertaining ending play of all sports: the walk off home run.

Monday afternoon, the privileged fans in attendance at the Boca Raton Christian (9-9) and Westwood ballgame were witness to such an ending. The Warriors tied the game in the bottom of the seventh with a two-run-homer hit by Kenny Goodrich, and later left the Blazers on the field with a three-run-homer hit by Brandon Nayor that capped the 5-2 rally.

“It’s a great felling having these kids come out and play the game,” Assistant Coach Armando Alvarez said of the two clutch homers. “Especially, since we fought hard for sixth innings, and we finally cashed it in the seventh.”

The game was a pitcher’s duel from the start. Westwood (8-5) sent sophomore Nick Mejias to the mound, and he matched opposing starting pitcher Adriel Martinez. Mejias only gave up two runs in the complete game, striking out seven.

The talented righty cruised through the first three frames only giving up a hit to the right side of the infield by Zach Gray. The Boca offense woke up in the top of the fourth. Blaize McSweeney hit a towering fly-ball that was lost in the sun and dropped in for a double. McSweeney was followed with two singles by Tommy Havelka, who finished the game 2-for-4 with a double, and Grant Gardiner, who drove in the first run of the game. After the infield was playing in to avoid another run, Austin Smith hit a ball that was out of the reach of the shortstop, scoring a second run. This would be all the offense that the Blazers could muster against Mejias on the day.

Martinez, meanwhile, kept a tight leash on the Warriors offense. He only gave up four hits, all of them singles, two of them infield singles, through the first six innings. The righty looked dominant, armed with a fastball that created havoc, he struck out six. 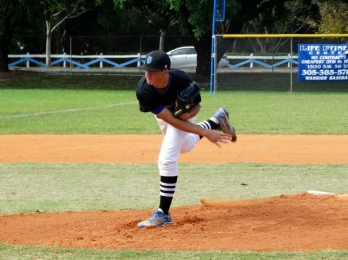 After being kept silenced for the first six innings, the Westwood lineup reached the seventh with a different mentality; somebody had to rise up to the occasion. To start the last frame, Michael Mejias reached base on a walk and stole second base to put himself in scoring position. With one out, lead-off hitter Kenny Goodrich came to the batter box. Goodrich, who had struggled with Martinez throughout the day, caught a high ball and drove it to the deep part of the outfield for a game-tying-two-run-homer.

“I was just thinking about hitting the ball the other way. I was trying to forget about my first two at-bats and pretend like a new game just started,” Goodrich said. “I just never gave up. I believed I could help my team win, which I did tying the game with the two-run-homer.”

With the game tied, the Blazers send a new pitcher in to relief Martinez and stop the offensive explosion of the Warriors. The reliever was welcomed by catcher Matt Fernandez and second baseman Kenneth Prado with two hits that put the game-winning-runs in the bases. Clean-up hitter Brandon Nayor then strode to the plate. He proceeded to blast a no-doubter home run.

After the homer, the Warriors pitcher seemed to be the happiest of the bunch. He had pitched an incredible game, and his teammates back him up in the end. He reminisced the fourth inning, and how he came back from the two runs to throw a complete game.

“I was trying to keep my team in the game and not let that inning throw me down,” Mejias said. “I just wanted to give us a chance. I knew my team was going to pick me up in the last inning.” 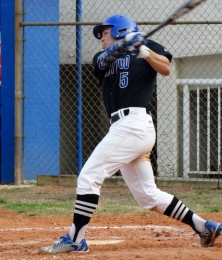 Brandon Nayor hitting the ball hard for the walk-off homer.

It was a well-played display from the Blazers squad. They had some timely hitting, a great pitching performance, and some highlights defensively. Boca’s Manager Clint Erickson was really pleased with the way his team presented themselves on the day and gave props to the opposite squad.

“We are finishing our season strong. We are getting better every game,” Erickson said. “We only have 12 players and we have been stretched with the depth this year. I’m very proud of my boys today. We didn’t beat ourselves, the other team beat us today.”

Armando Alvarez, who was in charge of the Warriors in place of Manager Julio Andrade, was extremely happy with the way his team played on the day. His first win came in a nerve-breaking fashion, but he enjoyed it.

“In all honesty, I saw at the beginning of the game a lack of intensity. Our pitcher had his heart on his sleeve, he pitched seven hard innings,” Alvarez said. “Once we got through the game, I knew somebody was going to step up and they did it in the seven.”