Overview – Goleman has won the district title the past few seasons, and the team has put itself in prime position to compete for another one. The Gators earned the top seed in the tournament and need to complete a season sweep over Mourning to stamp their spot back into the district championship.

On the other side of the bracket is two clubs who are equally dangerous and capable of beating one another. Miami Springs won both regular-season meetings with Norland this year, but neither win came easy. The Vikings are looking to make a statement this year, and that can happen should they win the third and final meeting against the Hawks. 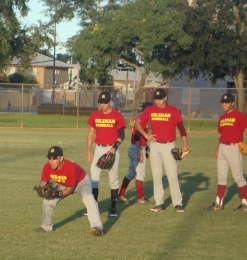 1. Goleman – The Gators are in a nice position to chase after another consecutive district title this year. The team moved down to Class 6A this year following realignment, which means they have a chance to win their first 6A district championship this season. In securing the top seed, Goleman is in the best position to make this a reality.

To prepare for the playoffs the Gators played a very tough and competitive schedule. The team closed out the year against by playing six district leaders in their final eight non-district games, giving the players a chance to fine-tune their stuff against the best of the best. Now they get a chance to see if that can pay off for them.

Not only did Goleman win both meeting against Mourning this season, but it did so against the Sharks ace Matthew Castrorao. The second victory came in extra innings, which should serve as enough of a reminder not to take them lightly the third time around.

The team has been consistent in their approach all season, and the players have excelled by sticking to the game plan put together by Manager Jose Lopez. The team knows that when they play their game and stay within themselves, they have always played their best baseball and have been capable of beating anyone.

“We prepare the same, we prepare to win and we play every team like they’re a great team, and it doesn’t matter who it is,” senior pitcher Sean Carrasco said. 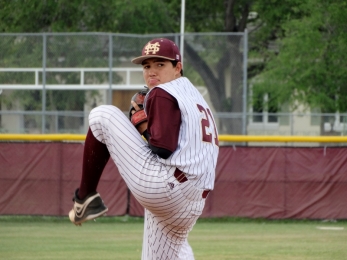 2. Miami Springs – The Golden Hawks have led a balanced attack this year, putting in a quality season that saw them playing their best baseball down the stretch when it mattered most. Now the team hopes to parlay that success into a regional playoff berth and a district championship. As the district hosts the club also has the added advantage of playing to their home fans on their familiar home field.

Springs has showcased a lot of potent pitching this year. The team has gotten great production from starters David Cervantes, Dylan Carter and Alex Iruela, all of whom are among the leaders in the district. This depth also gives the Hawks a nice advantage, as they have enough arms to carry them through a short playoff series.

The offensive attack has been equally balanced and dangerous. The club has hit for average, with Carlos Santana batting an even .500 for the year to lead the way, and has also hit for power, where Austin Voeller was the only guy in the district to connect for more than one home run this year. Voeller hit three homers to lead the club in that department.

Springs has shown nice balance and the ability to get the job done depending on what is needed. The team split the regular-season with top-seeded Goleman, which gives it plenty of confidence should it earn the right to the rubber match in the district championship. They also swept both Mourning and Norland this year, and have shown that they can hold their own in this bracket. 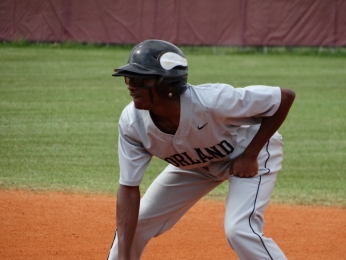 3. Miami Norland – No matter what happens from here there is no denying that it has been a great season for the Vikings. After years of futility, the program has emerged as a legitimate contender in 2014. They played their district tough this year and also posted a winning record for the first time in years.

While the Vikings are happy to erase the memory of those mercy-rule losses of the past, the team is not ready to rest on their laurels just yet. A victory in the district semifinals would put Norland into the regional playoffs, and would also give them the chance to play for the district championship. This is the sort of accomplishment that means more than any earned reputation.

Norland has gotten outstanding pitching from team ace Cleveland Westbrook, a right-hander who has led the team in innings pitched, wins and strikeouts. Westbrook transferred to the team from Dillard High in Fort Lauderdale this year, and he has proven himself by shutting down some talented Miami lineups. The speedy right-hander has also been a force at the plate, excelling at getting on base and stealing bases like he was Jackie Robinson himself.

The Vikings’ resurgence this year has come thanks to the production of many other key players. Kevin Harris emerged as the team’s number two on the mound, finishing with an ERA just under 2.00 and recording four victories. At the plate Brandon Carter, Dillon Belle-Vial and Darius Pryce-Lewis have all been productive in hitting for average, stealing bases and scoring runs.

The team has not been in the district playoffs for some time, so this season can already be considered a great success for the program. But a win over Miami Springs would help make this year something special, giving the team a chance to play for a district championship while also letting them return to the regional playoffs. 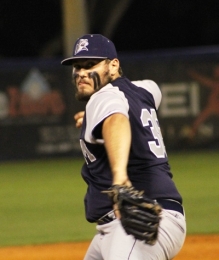 4. Mourning – The Sharks have played the toughest schedule in their program history this year, and now is the time that they hope that experience can pay off. Needing to grab a big upset victory in order to keep their season alive and qualify for the regional playoffs, Mourning is shoving all of its chips to the center of the table. The team took some lumps during this grueling season, but has also played many tight ball games that have them as battle-tested as they could hope to be.

Mourning should take some confidence into the district playoffs with them after playing the Gators and Vikings tough the second time around. Sometimes there is more to be learned in a loss than in a win, and the Sharks are hoping they can make the right adjustments now that the stakes are higher.

There is little question that right-hander Matt Castrorao will get the call in their biggest game of the season. The senior has been a workhorse for the club, leading the team in innings pitched and strikeouts, while averaging more than a strikeout per inning thanks in large part to a lethal fastball. Castrorao’s best game of the year came in a complete-game shutout victory over Westland Hialeah in which he struck out 13, and if he can find that groove again he could give his squad the best chance to pull off the upset.

Kevin Moreno and Marcel Guadarrama have emerged as quality compliments to the team’s ace, and both are experienced after tossing some big innings this year.

The team has not struggled to score runs this season, and is capable of battling in a shootout should things come to that. Castrorao, Nicholas Zambrano and Alex Vallejo have been the main offensive leaders on this deep lineup.

In their fifth season of existence, the team has set a goal to make the regional playoffs for the first time in program history. The Sharks are going to lay it all on the line to try and make this their year to remember.

“We’re no longer happy with just competing; we want to get the program to the next level,” said Sharks Manager Edwin Bonilla. “This is the year we are going to try and put the program on the map for the first time.”