Overview – It was an exciting slate of games that played out in this district this season. With teams getting healthy and lined up for these pivotal district playoffs, all the cards are lined up for those games to bring the most excitement of them all.

Hialeah Gardens made a surge in the second half of the season to claim the district’s top seed, but it did not come easy. Both victories over Miami came by one run in very tight ball games, and the Gladiators played equally close contests against Hialeah. Should Gardens take care of business in their semifinal against Miami Beach, it will face a big test in the third round against either the Stingarees or the Thoroughbreds.

This level playing field should give each club the drive and motivation it needs to get over the hump and play for a district championship. 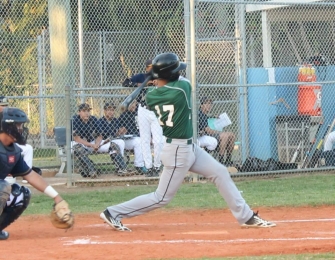 Chris Clara and the Gladiators have played an exciting district schedule, and now things wil really start to heat up.

1. Hialeah Gardens – The Gladiators have flourished in the second half of the year. Since Spring Break the club has been playing its best baseball, and has cultivated plenty of confidence to take with them into district playoffs.

“I think we’ve got a good ball club and I personally feel that we can play everybody tough,” said Gardens Manager Tino Burgos.

Offense has been very consistent for the Gladiators, with .400 hitters Alex Vasquez, Chris Clara and Nathan Llanes leading a very deep batting order. Clara and Chris Suarez also headline a very solid and reliable pitching staff. The team has plenty of confidence in its bullpen, which has Eddy Nodarse looming at the tail end should he be needed to close out a big game.

Also aiding the Gladiators is the recent return of senior catcher Gary Garcia, who popped a two-run home run on the first pitch he saw in his late-season return from several nagging injuries. But while the veteran brings the team more power and presence in the lineup, what he also provides is leadership and enough savvy to keep his guys from overlooking anyone.

“We’re just ready to play, because you never know what can happen,” said Garcia. 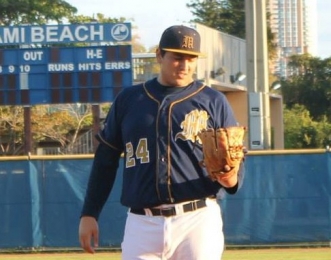 The Stingarees have gotten great pitching this season.

2. Miami – 2014 has been a big return to relevance for the Stingarees. After winning just five games total in the past two seasons combined, Miami High has put together a squad that has played very solid and fundamental baseball this year. When the team is clicking they are very tough to beat, while at times they have reverted back to their old ways and have shown some vulnerabilities.

“We are not as good as our record indicates and we are not as bad as people think,” Miami Manager Frank Suarez said during the season. Now the squad has reached the point in the year where they can prove just how far they’ve come, perhaps enough to earn the recognition as a good ball club.

Pitching has been the core strength of this group. Leading the pitching staff is Andy Escono and Edgar Apirico, both of whom have put up strong numbers while pitching deep into games and always keeping their club in the game. Miami has a team ERA around 2.00 and they have showcased the type of pitching that wins championships.

Miami has gotten some strong leadership from guys like Victor Herrera and Argenis Hernandez, both of whom have led the way on offense as well. Each starter is a key cog to a very stout defense, one that is even stronger with the return of third baseman Paul Gomez. Dayron Mallea has been a rock in center, and Cristian Torres has solidified the infield at shortstop.

Youth has also been an exciting part of the club’s resurgence, such as freshman infielder Khalil Harris. The team is looking good for the future to come, but right now the present is all they are focused on. 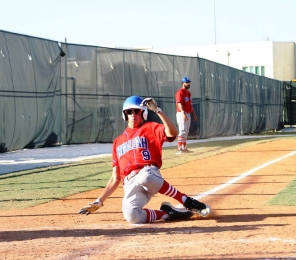 Damian Iriguyen and the Thoroughbreds will be looking to score a big upset victory in the district semifinals.

3. Hialeah – Miami had the Thoroughbreds number the first two times they played them this season, winning by scores of 6-0 and 7-3. But this game is the one that really counts, and Hialeah will have to play its best game of the season now.

The Thoroughbreds have played a tough schedule this year despite their youth, and yet they still have managed to play their district tough. If the third time proves to be the charm and Hialeah does get past Miami, it can take confidence in knowing they have beaten each of the other teams in the district playoffs already this season.

The team has strong starting pitching, with Alexis Herrera and Jonathan Sanchez leading the way. Herrera has toed the rubber for the team’s biggest games, and he has responded well to finish among the county leaders with 68 strikeouts. Out of the bullpen they also have come to rely on Thomas Borrego, and freshman Erislandy Rivas has also tossed some big innings to lead the club in ERA this season.

Adrian Gomez has been the main cog in the offensive unit, leading the club in most offensive categories. Meanwhile Alex Miret has been a spark plug for the club by doing a little bit of everything for them.

After the team’s slow start they reshuffled the starting unit, and some of the new starters really stepped up this year. Catcher Carlos Perez solidified the defense from behind the plate, throwing out 12 base runners on 24 total stolen base attempts. It was also the little things that players did that made big differences, such as outfielder Alexis Figueroa setting a great example of unselfishness by leading the club with seven sacrifice bunts on the season.

Although Miami came away victorious both times they met this year, The T-Breds take solace in knowing they were close games that could have gone either way. In both cases things got away from them late when the Stingarees executed and they didn’t. But they know they can play with them.

“We’re looking forward to facing Miami High again,” said Hialeah Manager Jonathan Hernandez. “If you look at our record, the positive of it is all our wins have been in the district. So if these guys continue to buy into the philosophy and continue to do the things that they’re capable of doing then I look forward to having another great match up with Miami. Coach Suarez has done a great job with the team that he has and we’re just looking forward to getting an opportunity to go forward in the districts and hopefully around the county.” 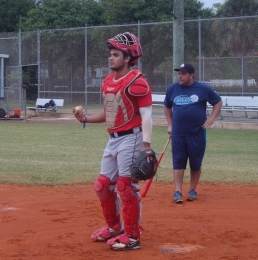 Senior catcher Leoni Lammana is one of the top offensive leaders for the Hi-Tides this season.

4. Miami Beach – Even though the Hi-Tides are the lowest seed in the district playoffs, they have every reason not to feel like massive underdogs. Miami Beach has everything on the line for one big game, needing to upset the top-seeded Gladiators in order to keep their season alive. They have every reason to believe that they can make this happen.

Although the Hi-Tides lost both meetings to Hialeah Gardens, in both cases it was by a score of 2-1 in very tight outcomes. Miami Beach has played two tight contests with them and they should have every reason to believe they can do it again. Both Blake Brattain and Jonathan Gonzalez have proven they can hold their own against the Gladiators lineup, but the real difference will be in whether or not they can hit as well. One of their two losses came in a no-hitter, and the team was a combined 4-for-44 in the two meetings.

The difference that makes this such an intriguing match up is that now the season will be on the line. Miami Beach has gotten great pitching from Brattain, with an ERA under 1.00, and Gonzalez and Alex Beer have also provided solid innings for the club. They have been dangerous on the base paths this year, with Gabriel Obregon leading the way with over 20 stolen bases. Obregon, Cristian Almonte and Leonni Lammana all lead a much improved offense.

Today's Games
Latest Scores
Scores last updated at 8:51 am
No Scores Yet!