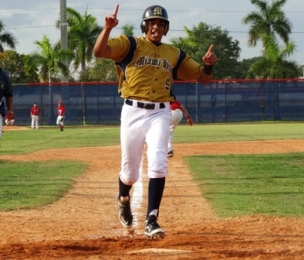 Dayron Maella scored the winning run after being driven in by Christopher Herrera.

Tuesday’s 8A-14 playoff semifinal at Alex Fernandez Park saw two titans going to battle. One was fighting for one more try, the other one for his teammate’s last chance. Hialeah Alexis Herrera and Miami Senior Edgar Aparicio went toe-to-toe for eight innings, with a look in their eyes that showed them capable of going for many more.

In the end the Stingarees got the best of the Thoroughbreds 3-2 to advance to the district final.

Both managers gave credit to their pitchers for putting on a show the whole afternoon. Aparicio dominated the Thoroughbreds for the full eight innings, striking out nine and surrendering only one earned run.

Miami Manager Frank Suarez called Aparicio a fighter, a pitcher that has meant as much as anybody on the team.

“He is the kind of guy that brings it all the time. When you give him the ball, no one can take it from him. He is that kind of guy,” Suarez said of Aparicio. “The record may not show it, but he has been a fighter all the time. He used to be my closer at the beginning of the year, and that was a great part of what brought us over here.”

Hialeah Manager Jonathan Hernandez looked back on how dominant and reliable Herrera had been through his last four years playing varsity. He trusted him with this game. Herrera showed grit and passion on the diamond. He pitched the complete game, subduing a Stingarees lineup that only generated three runs against him.

“Going into the game I talked to Alexis and told him I was going to ride him all the way through,” Hernandez said. “In the last inning he was probably tired, but he wanted the ball. He is our guy. He has been our program for the last four years.” 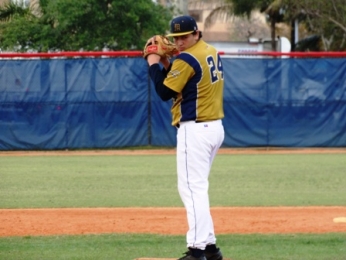 Edgar Aparicio was the winner of the match up, going the distance for Miami High.

Suarez also gave some recognition to his opponent. He said that the opposing pitcher and the manager deserve all the credit.

“It was a good effort from both teams,” Suarez said. “Jonathan has done a great job with Hialeah after having a rough beginning of the season they came back.”

Sometimes when there is such a match up, baseball becomes a sort of chess match, where both opponents are hoping for a mistake of the other to take advantage of. Except that never happened, and the game was deadlocked at two runs apiece after seven full frames.

For the Stingarees (14-9), Argenis Hernandez was 2-for-4 with two doubles, and Khalil Harris went 2-for-3 with a triple and a walk. Harris is a newer addition to the starting lineup, and was a surprise by catching the eyes of the fans with some breathtaking plays with his bat and on the hot corner at third base.

“I felt as if did my job today,” Harris said. “If I can do this every game, we will come up with a win. I work hard in practice and every day I try to do my best.”

Herrera had the game tied at two coming into the bottom of the eight when with a men on base the quiet Chris Herrera came into the batter box. The lefty junior had been held hitless for the day and had been even subbed. This time his Manager trusted him and Herrera hit a sharp hit that scored the deciding run of the game.

“I struck out my first two at-bats, and after they subbed for me I was mad. I knew that if it came down to me I was going to get the winning hit,” Chris Herrera said.

The pitcher Herrera was mad at himself after the game, when in reality he should have been proud of how great his playing days at Hialeah were. He was for the last couple of years the soul of his team.

“It was a good game. I am so proud of these guys, they will be my brothers to the end, and we all bleed the same blood,” Alexis Herrera said. “We fought, we fought, but sometimes you fall short. At least I know everybody behind me stood tall.” 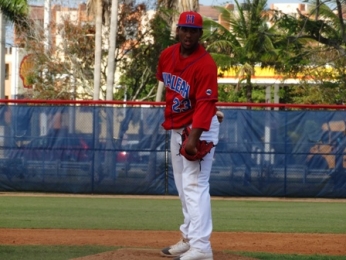 Alexis Herrera was a workhorse for Hialeah on Tuesday, as well as throughout his stellar four-year career.

Aparicio, was the first one to cheer his teammates from the dugout, understanding the need of getting the win for the seniors.

“I never thought I was going to lose this game,” Aparicio said. “I trusted the team on defense and hitting. I just threw my strikes and let the game take its course. Me seniors did their job for me, so I did mine for them.”

Coach Hernandez called this one of the top games he had been part of in his years of experience in high school baseball.

“This is probably one going into it; I knew it was going to be a dog fight. I told my guys to stay the course, stay with our philosophy, knowing that if they did that we would win,” Coach Hernandez said.  “I told them yesterday in practice, that if they give their all on the field, that is where I am most proud of. Every at-bat, every running, they left it all on the field today and I am extremely proud of this ball club.”

Hialeah (5-18) will regroup for the future, while its seniors will focus on the next step in their individual playing careers.

“We have a couple seniors that will play baseball and others that will continue their academic careers. That is pretty much what I am about,” Coach Hernandez said. “I am just trying to get these guys into college. Most of my graduating class is moving on to the next level, either academically or athletically.”