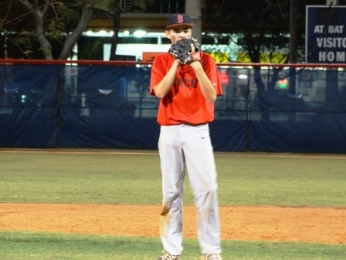 Miami Beach came into the 8A-14 semifinal against Hialeah Gardens as an underdog. Not many gave a chance to the fourth-seeded Hi-Tides, who were opposing a Gladiators club that nearly went perfect in the district to earn the top ranking.

On paper the match up seemed easy to call, except baseball games are not played on paper.

The Hi-Tides beat the Gladiators 8-6 in an entertaining ballgame that had tension, controversy and kept everyone in attendance nervously ready to jump onto the field throughout.

Miami Beach Manager Willy Baez acknowledged he was confident in his club, and also thrilled beyond words at the task his team had just committed. It was a win that was a long time coming for both he and his players.

“Words can’t describe how happy I am with this group of kids,” Baez said. “We had our back against the wall, but I told them that this was our night. I told my seniors to come out and enjoy the experience. To do it against the number one ranked team in the district, it was huge. These guys never stopped believing in themselves.”

Miami Beach (8-11) is perhaps the most charismatic team in the county. They have fans that go as far as to lose their voice for the sake of showing support for their team, and they have some colorful characters in the roster. There was a backup catcher wearing a farmers hat at night, and waving two sticks as if his only reason of existence was cheering his teammates, and a first baseman that hopped to first base injured on a hit and still refused to come out of the game, then later with a bag of ice on his leg was storming onto the field to celebrate the victory with his teammates. 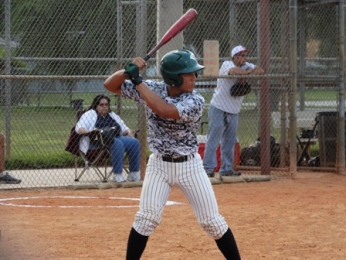 Even the winning pitcher Blake Brattain had his things. Coming in as a reliever, Brattain killed the powerful Gladiators offense after a four-run first inning. Through the ballgame, the sophomore would look into his hat as if looking for some support. He would later admit, that in the hat he had engraved the quote “Strive, prepare, believe and achieve” to help him in the game.

“Coaches have prepared me for this moment since I started here,” Brattain said. “I just try to throw strikes and I know my boys are going to have my back. Today, I got into some jams but I got out of it and my teammate had some clutch hitting that got us the win. It feels good that I could put the team on my back. We battled back and gave some fight to get the opportunity to win the game. Since the third inning, when we started fighting back, I knew we were going to win this game.”

Brattain was extremely confident once he came into the game. His coaches never doubted him, to the point that in the seventh inning with the bases loaded and a two-run lead they allowed him to continue to pitch. He faced the last batter with straight fastballs, until the batter hit a soft pop-up in front of the plate that senior catcher Leoni Lamanna dove for in a spectacular catch and throw to double off a runner and end the game.

“It felt as it was meant to be,” Lamanna said. “I have been one of the few guys that have been here for four straight years and everyone doubted us since the beginning. This is something that stayed in my heart. I knew I was the guy to lead my team into the victory. The last play was just the cherry on the top.”

Gabriel Obregon, the leadoff hitter and a standout through the season for the Hi-Tides, said that a lot people didn’t believe in them to win this game, but that the whole team was ready and focused in this game.

“We came out here after four years that we never had been to the playoffs,” Obregon said. “Today we had to do everything we could to come out here and be victorious.” 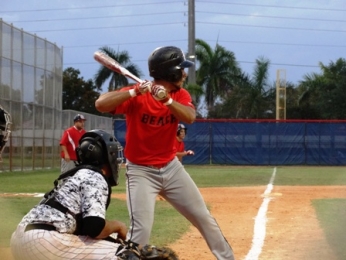 Gabriel Obregon moments before driving in a run.

Hialeah Gardens senior Gary Garcia, who was 3-4 on the night with a couple of doubles and a triple, said this result was part of baseball. He acknowledged that there cannot be overachievers in this sport; baseball players always have to stay focused or a result like this would happen.

“We had a great season; it was a bad loss,” Garcia talked about his senior’s teammates. “Now we have to keep going forward and play baseball.”

“It’s a tough loss,” Burgos said. “I came confident into the game, but I knew a well-coached team like theirs will have his guys ready to play. I thought we came out with a lot of energy and fight but unfortunately you have to finish the game or things like this happen. We just didn’t do a good job of finishing the game.”

Burgos admitted he felt remorse to have to say goodbye to his seniors in such a way.

“I am very proud of my seniors, I am very proud of the way they have developed for these past years,” Burgos said. “Unfortunately, we couldn’t come up with the districts. Baseball it is like that. I hope they can learn from this.”