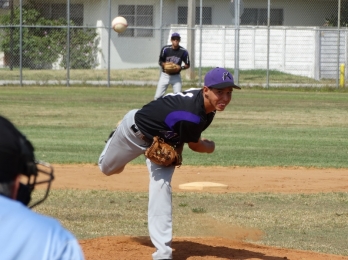 Dr. Krop has had a tumultuous season so far. Think of any difficulty a baseball team could have, and they have endured it. They had a mid-season coaching change, they have a young and inexperienced team, and the talent they have is still unproven. All of these came into reality to start the year, as the Lighting squad began the season 0-10.

But since winning their first game against Norland in their eleventh try something may have clicked from then. Krop is 6-4 since then and is playing a better brand of baseball that is up to their potential.

Win number six took place on Thursday against North Miami Beach, as the Lighting took care of the Chargers 7-2, aided by the pitching of freshman Fabian Ortega and the play of captain Ian Santana.

“It’s a good game for our guys. This was a fairly even match that we had here,” Lighting Manager Scott Olsen said. “We had a couple times there where it could have gotten away from us if they would have gotten a hit and driven in a run. Fortunately for us, our pitcher was able to make pitches and shut them down for the most part. I thought it was a really well played game on both sides.”

Krop (6-14) opened things up, going all in against the Chargers starter with a trio of hits that scored a run in the top of the first by a sac-fly off the bat of Emilio Escandon. In the bottom of the same inning, North Miami Beach responded by scoring an unearned run that was mainly manufactured by third hitter Samson Blues. Blues was the motor of his team on the afternoon, going 2-for-2 with two walks, two stolen bases and scoring both runs for his team.

“I just want to put the ball in play, help my team out, be a team leader, and show them how its done,” Blues said. “I just try to make contact. That is all I try to do; get on base.” 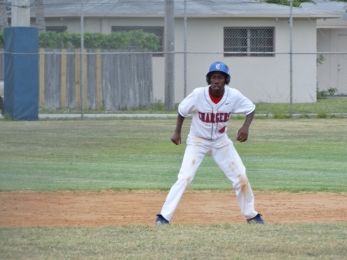 Samson Blues right before scoring his second run of the game.

Lighting freshman Chris Ortega started the game and was dominant through the first four innings. He didn’t gave a chance to the opposing team, striking out seven. His mechanics and repetition was the key for his strategy.  He kept fighting his opponents after the unearned run tied the game, letting his teammates back him up and just doing his job.

“I was just making my pitches. I was letting them hit, letting my teammates make plays behind me. It feels great,” Ortega explained of his strategy against the Chargers. “I have three more years of baseball, I hope to get better and I hope our team gets better.”

On his part, Olsen had encouraging words for his starter. He said that it is a pleasure having such a player on his team and he is delighted at the prospect of having seen the potential Ortega has revealed throughout the season.

“His future is bright,” said Olsen. “He has only been playing baseball for four years. His future is looking very good for us. Hopefully, he can keep developing and in a couple of years you are going to see potentially a really good prospect.”

Right after the game was tied in the second inning, Krop came out ready to attack the opponent. They put two men on the bases to start the inning. In this situation, Santana came to hit. Hitting ninth on the day, the senior drove in the two runners to open things up. He scored a couple of batters later on a groundball to the infield.

Santana finished the day 3-for-4 with two RBIs and a couple of runs. He was relentless on the base as well, finishing with two stolen bases and forcing some throws that helped his team. His play was welcomed and served to make the game interesting and more enjoyable. 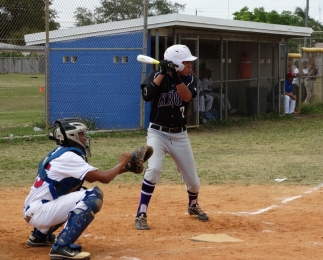 Ian Santana batted ninth, but he was the motor of the Lighting offense.

“This is what I love to do. We have to come out here and play like that every single day,” Santana said of his style of playing. “I’m competitive, I’m going to try and come out here every day with that attitude, and try to win ballgames.”

Chargers Manager Alex Rodriguez was not happy with the performance of his team. He thought that he should have had the win. With both teams so evenly balanced, he didn’t expect to lose this ballgame. After the ending, he didn’t give any excuses for his club.

“We are young and inexperienced, but at this point of the season that is not a good reason,” said Rodriguez. “We made a lot of physical and mental errors that ended up costing us; they took advantage of it. I expected to come out with a win. They got to our starter early and on the offensive side we didn’t put enough pressure on them.”

The Chargers (2-11) are also a young club with a bright future. While the future provides hope, Rodriguez is looking for them to bring more focus to the present and be more accountable for their play.

“We work hard but sometimes it’s in our head. I know we are a better team than this,” Blues said. “I know that if we keep working hard, we keep practicing, we keep improving, we are going to get better.”