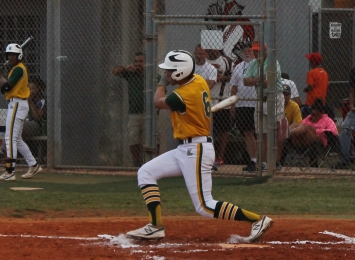 Danny Cumba and the Cougars came back for a big win to return to the 8A-16 title game.

Coming into the season one of the goals for the Killian baseball team was to try and win its third consecutive district championship. Playing in such a competitive district, the Cougars knew what a tough challenge that presented. The team knew it would not be easy, but it was a goal that motivated them to live up to that challenge.

Tuesday evening the club put itself into position to try and check that goal off of its list, as Killian rode a big third inning to beat Varela 8-1 in the second 8A-16 district semifinal played at Robbie Smith Field at Southridge High.

The Cougars (22-4) will face rival South Dade in the district championship, after the Bucs beat Palmetto in the other semifinal to also advance. Both teams also qualified for the regional playoffs that begin next week.

“Nothing worth having is easy, and having another district championship in our district is definitely worth having,” said Killian Manager Angel Herrera. “The game ahead is going to be a phenomenal baseball game. South Dade has a tremendous club and it just seems like that has been coming and that is the pattern here. We’ve seen them in the district final for the third time in four years and we have our hands full and are in for a fight there. We know we are going to get their best effort. We have prepared for adversity and we can rest assured knowing we are going to get plenty of it on Thursday. We’re going to go out and battle.”

After playing one of the toughest schedules in the area this season, Killian got its latest test Tuesday night in a hungry and worthy Varela opponent. The Vipers (10-10) came into the game after a tough, close win over Miami Sunset, and they gave the Cougars everything they could handle early on. Varela took an early lead and held onto it until Killian battled back with a big third inning to jump ahead and take control.

“One of the disadvantages of having a bye is that you’re playing a team that has already played and you’re playing a team that has already been there,” said Herrera. “We fought a little bit of the jitters early on and we had to kind of weathered that storm until we got to settle down and all of a sudden a baseball game broke out. It’s a learning experience for us in terms that we know what it is like to play in a playoff atmosphere now. I’m glad we were able to get it under our belt and we’re ready to move forward to Thursday.”

Trailing 1-0, Killian batted around the order in the third to steal the momentum. Eddy Arteaga got things going by legging out an infield single on a high chopper over the mound, and then quickly moved to third base when Ryan Sabbag was hit by a pitch and Sneaky Guzman beat out a bunt to load the bags. Danny Cumba delivered the first dagger by jumping on the first pitch and drilling it past first base to drive in two with a double. 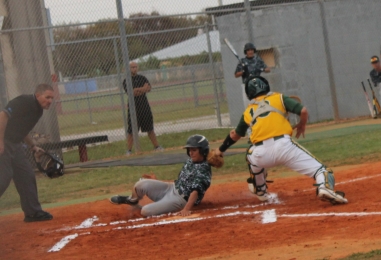 Chis Allende scores in the first inning for the Vipers.

Keith Stevens came up with the bases loaded back up, after the Vipers elected to intentionally walk Spencer Levine to try and set themselves up for a double play that could have gotten them out of the inning. Instead Stevens connected for the first of his three hits on the night on a blooper into “no-man’s land” in shallow center field, which pushed Guzman across the plate. “Dat Dude” Eddy Demurias kept the chain moving by pushing Cumba home a fielder’s choice, and Joey Gonzalez followed with an RBI double to push the lead to 6-1.

Staked by the big comeback, Killian starter Ryan Granda went into cruise control from there to toss three shutout innings before turning things over to Miguel Deguzman to close out the seventh. Granda scattered four hits over six innings, allowing one earned run while walking two, hitting two batters and recording four strikeouts. Granda settled in and maintained his composure despite a rough start that saw the team commit three uncharacteristic errors to fall behind.

“My hat goes off to Coach John Barbato and the Felix Varela baseball team,” Herrera said. “Those guys fought hard, they played hard, they played well and they played together. They certainly gave us everything we could handle. Coach Barbato has done a tremendous job this year and my hat goes off to him. He already has my ultimate respect as a baseball man, but what he did with his club this year is tremendous, and they’re going to be around for years to come.”

None of the Vipers starters on Tuesday had any varsity experience back at the beginning of the season. The infield defense was made up by senior shortstop Ben Murray, who played a little bit sparingly last year, while second baseman Kristian Quincosa was on the junior varsity squad and third baseman Kyle Gerdts was a backup reserve player. The entire outfield was made up of sophomores all in their first season, while their ace starter Nicholas Leon is only a junior.

“We’re a very young team and the first half of the season was a learning experience,” said Quincosa. “We had a lot of away games and it was basically seeing how we play against our opponents and feeding off of that. Once we got to the second half of the season we played most of our home games and we fed off of our crowd and fed off of ourselves being home. It helped us a lot knowing how the other team is playing and how they react and how they pitch. It helped us a lot in the second half.” 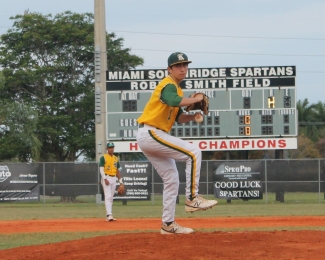 Ryan Granda got the start and earned the win for Killian.

The Vipers improvement was illustrated not just in their wins and losses, by in how they got them. The team played great together, executing fundamentals and working together as one unit to get the most out of everyone on the roster. The guys played with passion and humility, refusing to hang their heads or doubt themselves. They bought into the system and made it work the way they were taught to.

That poise was evidence right away, as Varela jumped on the scoreboard in the top of the first inning. Ben Murray drew a leadoff walk, but was erased at second on a fielder’s choice that put Chris Allende on base. Jonathan Bermudez was hit by a pitch, and then both runners advanced into scoring position on an errant pickoff attempt. Tony Mejias then tallied the big hit when he bounced the ball to third base, and Allende did a great job of beating the tag when the throw went home. Allende slapped the plate ahead of the tag from the catcher Levine, igniting the Vipers fans and giving the squad a big emotional lift.

Even after falling behind later on, the Vipers continued to play with that same fire and passion and refused to give in. They forced the Cougars to give them their very best right down to the end. Batters fought through each pitch at the plate, and the defense kept Killian off the scoreboard again until it added two unearned runs in the bottom of the sixth. It was a valiant effort, even though it did not produce the result they had hoped for.

“The Cougars are a good ball club and you have to tip your hat to them, but if anybody had told me that we would be 10-10 and the number four seed in the district back in January I would have told them they had been drinking too much,” said Varela Manager John Barbato. “Our young kids really came through. None of these guys had any varsity experience and they made believers out of me. I’ve got to tip my hat to them and I can’t wait until next year.”

Varela will lose a few key members this year, such as Murray, who was 2-for-3 to lead the offense, and also Quincosa, who came on midway through the season to take over second base and solidify the defense. Through the adversity that the team faced during the season, the departing veterans could not help but appreciate the experiences they had grown through with their club. They trusted their coaches and they just hope the guys behind them learn to do the same.

“John Barbato has always been on our side, and we got a new coach last year in Eryk Dees and he has helped us out a lot too,” said Quincosa. “Not just on the field but off the field as men, and teaching us the game, all the way down to how you tie your shoes and how you wear your hat, how to tuck in your shirt and how to wear your socks, just everything. It’s been a great help. Roger Ball has been a tremendous help at first base. On and off the field these three men are great men.”

Varela is a young program with a bright future. While they embraced the underdog role all season, the veterans know that the guys coming back are capable of building their program into the ones to be feared.

“Just stay strong,” Quincosa said to his younger teammates. “They are going to tell you no, and you say yes.”