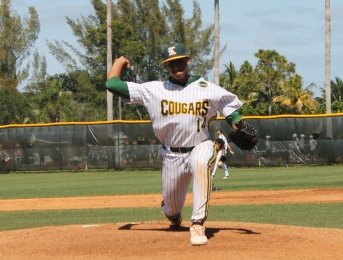 Keith Stevens earned the win on the mound and also went 2-for-3 with an RBI double.

Things have been clicking for the Killian Cougars lately. The team has rallied together of late and everyone is doing their part to help them win games.

With contributions all over the roster, that trend continued on Thursday afternoon as host Killian prevailed 7-2 over Miami Sunset in an 8A-16 contest. The victory keeps the Cougars at the top of a very tough district, and came just two days after another big victory over South Dade.

“Our coach preaches the same way the right way every time and we just play as hard as we do every time we play,” said Cougars starter and winning pitcher Keith Stevens, who also had a big day at the plate. “We are just trying to stick to our approach as a team, and I was just trying to hit the ball hard. We’ve been discussing an approach and finally everybody is starting to buy in and it is showing on the field.”

Every starter reached base for the Cougars, as the team took advantage of every opportunity they got to build an early lead and then maintain it throughout. Players are bringing enthusiasm and confidence to the plate with them, and the team is playing relaxed and exciting baseball.

“We’ve been playing well lately as a group all the way from pitching, hitting and defense. It starts with preparing in practice and it gives us more confidence going into every game,” said Killian second baseman Eddy Demurias.

Following a midseason funk, the Cougars regrouped and simply caught fire from there. Manager Angel Herrera challenged his players to prove their focus, dedication and willingness to play according to the team concept. Thursday’s win was just another example that the message was received loud and clear.

“The approaches have been phenomenal the last few weeks,” said Herrera. “To come and have a good sound performance offensively, and we squared up on a lot of balls today, it was good to see that. Sunset is a very good team, and every time you can get a win in this district you’ve got to come out and take them when you can. I am very happy we were able to do that today.”

The Knights (9-9, 4-6) have struggled to find that same level of consistency this season. After graduating a core group of leaders from a season ago, the team has slowly come along as many new and young starters worked their way onto the scene. Sunset has proven that it can play with the tough teams in its district, and the club has won some big games throughout the season. But as a whole they have lacked that consistency they have aimed for.

At times the players have showcased their tremendous ability, coming up with big hits, making big pitches and having big plays on defense. Thursday afternoon produced some more of those moments, such as some impressive diving catches made by Mike Rodriguez and Danilo De Armas, and also an impressive throw from right fielder Alfredo Iser to Herbert Iser to catch a runner out at the plate. Sunset also made two double plays on the day, including an impressive catch by Roberto Hernandez on a sharp liner in which he then quickly flipped the ball to Rodriguez to double off a runner. 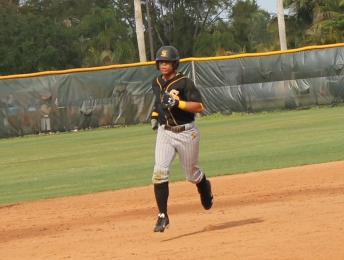 Alfredo Iser rounds third base after hitting a two-run home run to put the Knights on the scoreboard.

Yet while the defense made several impressive plays, the unit also committed five errors that led to all seven unearned runs.

“We just can’t seem to play together,” said Knights Manager Armando Pelaez. “There are routine plays that we don’t make, and we’ve got to avoid that big inning. The whole season that’s been haunting us is that big inning where we’ve got extra pitches and extra hitters and defense is not stepping up and making the plays. They hit the ball well today and we missed our spots a few times, but the defense has got to play behind them and show up to the yard everyday. All these games are big. That one inning keeps haunting us, but we’ve got to keep at it and keep working.”

Killian scored two unearned runs in the first to open up a lead it would not relinquish. After a fielder was unable to secure a catch deep in the outfield to allow Freddy Zamora to score from first base, Stevens followed with a blast to center field for an RBI double. The Cougars then plated the winning run an inning later when Ricky Guzman singled to right field and then came home on a shot deep to right field off the bat of Danny Cumba. Zamora added an insurance run to go up 4-0 after he reached on an error to push in Cumba.

The Cougars put the game out of reach in the fifth. Stevens walked and gave way to courtesy runner Sebastian Gonzalez, and “Dat Dude” Eddy Demurias did a great job of staying back on the ball and slapping a double into the right field corner to put both runners in scoring position. After another error sent Gonzalez home, Eddie Arteaga drove in two more on a shot deep to left field.

The run support was more than enough for the starter Stevens, who picked up the victory with over five solid innings of work. While most starters traditionally take a little while to settle in and find their groove, Stevens found his zone very early on. After Knights leadoff hitter Danilo De Armas slapped a single to center, Stevens induced two straight infield groundouts and then followed that up by picking off the runner on a nice move to first base. The right-hander struck out the side in the second, and faced the minimum through four innings before the first two runners reached on errors in the fifth.

“I felt good. I’ve been trying to get focused on the mound and I felt like I was just throwing my stuff and hitting my spots,” Stevens said. “That was my idea going into the game; I didn’t want to start slow. I wanted to start with my best and then keep it going the rest of the way.”

Trailing by a touchdown, the Knights avoided the shutout with a late reminder of their lethal ability on offense. De Armas reached on an error leading off the sixth, and two batters later Alfredo Iser jumped on a 1-0 delivery and crushed it deep to left field for a two-run home run that traveled roughly 365 feet.

Miguel Deguzman and Frank Follaco combined to close out the final two innings and stymie any further comeback attempts. 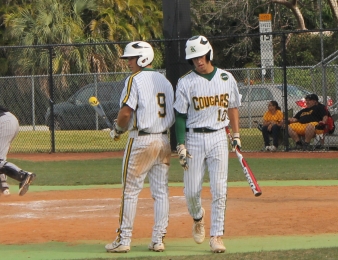 The Cougars have been playing great team baseball of late, and have been there to have each other’s backs.

The victory puts Killian at 9-2 with one district contest remaining next week against Varela. Should the Cougars win, they could clinch the top seed in the district. However, if South Dade also wins out in district play things would get more complicated and likely need some sort of tiebreaker.

“Like I was telling our guys, all we can control is what we can control. We’ve got to do our job,” said Herrera. “We don’t want to get caught up in looking around us; let’s do our job and focus on getting this win. This was a very big win; Sunset is a good team and they are a very formidable team. They are very capable of coming out and beating anybody, so we knew we had to come out here and play. The boys showed up, they played well and we keep rolling.”

The Cougars also recognize what a tough game still awaits them against the Vipers, who upset Southridge on Thursday to further shake up 8A-16. Rather than allow themselves to become complacent, the Cougars are eager to keep working hard and pushing themselves to rise up for these moments that they have prepared themselves for.

“I think this is the toughest district in Miami and our goal was to be at the head of it going into the districts, and we’ve put ourselves in a good position to be there,” said Demurias. “So we’ve got to keep playing and finish with our last couple of games here and hopefully things go our way and we end up with the number one seed.”