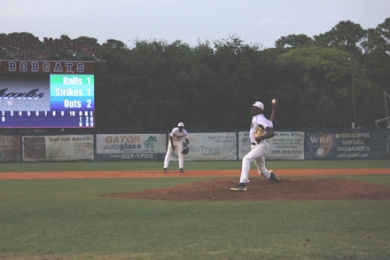 Cleveland Westbrook got the win in a complete-game shutout effort where he struck out ten and walked none.

In a district of five teams, four of which make it to the district playoffs, Norland and Mourning are fighting for playoffs seeds. Who will take on Miami Springs or Goleman in the district tournament will be decided by these last remaining district matchups, and Tuesday night was the most important of them all.

The atmosphere felt like a playoff game, and with Mourning hosting their ‘Senior Night’ at St. Thomas University’s Paul Mainieri Field, emotions were high.

Tuesday night’s game was an exciting pitching duel that saw both teams’ aces facing off for all seven innings, but early offensive sparks from Norland left the Vikings on top 1-0. The victory puts Norland as the third seed in 6A-15, where they will see the Hawks, while Mourning will face top-seeded Goleman in the district semifinals.

Rarely can you attend a high-school baseball game in the tri-county area where both senior aces from each team strikeout ten batters, but Tuesday night’s matchup was one of those occasions. Visiting Norland starter Cleveland Westbrook took on Mourning’s Matthew Castrorao, and both brought their best stuff for the district matchup.

The matchup started with an opening ceremony for the Mourning Sharks’ seniors, while Norland led things off at the plate. Castrarao struck out the first of many batters on the evening, but gave up a triple to the second hitter Roderick Lucas, who scored on a Brandon Carter RBI ground-out.

Castrarao fanned the next batter and didn’t allow a run through his next six innings of work. Westbrook had a similiar frame of mind, striking out the first batter, and working 1-2-3 through the first frame. Westbrook worked as efficiently as a starter can work through seven innings, striking out ten, while walking no hitters.

“Cleveland is a leader on and off the field; he drives the team not just with his playing but his attitude,” said Norland Manager Dave Dresner. “He digs deep and he fights. Guys like him bring you back from being down; their energy is contagious. Cleveland is a born leader and he thrives in situations like that.”

Equally as efficient was his opponent Castrarao, who allowed only one hit in the second, before striking out two consecutive hitters of his ten on the evening. Westbrook again struckout the first batter in the bottom of the second, and gave up a hit to Marcel Guardarrama before stranding him. Both teams threatened with runners in scoring position all game, but both pitchers proved resilient in stranding runners throughout the night. Both teams stranded a pair of runners in the third and Mourning again threatened in the bottom of the fourth. 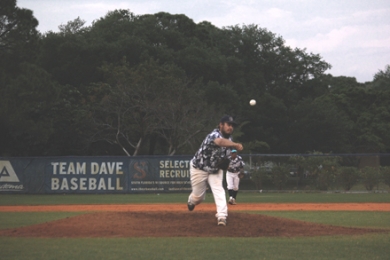 Matthe Castrorao threw seven strong innings and struck out ten, but suffered the loss after giving up an early, first inning run.

A lead-off single by Castrorao started things off for the Sharks, and a ground ball and a defensive miscue brought up Marcel Guardarrama, who drove a line drive to right to send Nicholas Zambrano to third. Another fielders choice and a stolen base put runners on second and third with two outs, but again Westbrook struck ut another to end the inning.

Norland mirrored Mourning in the sixth, stranding runners on second and third before striking out to end the innings. A quick 1-2-3 for Westbrook sealed the victory in the bottom of the seventh, meaning one run was all the Vikings needed.

Both teams look ahead to the district tournament, where, just like all baseball games, anything can happen.

“I keep telling the guys to keep believing and buy into the cause,” said Mourning Manager Edwin Bonilla. “Staying positive in our guys and in ourselves, we’ve got a shot to make some history here for our program.”