Westwood Christian Falls In 3A-15 Championship 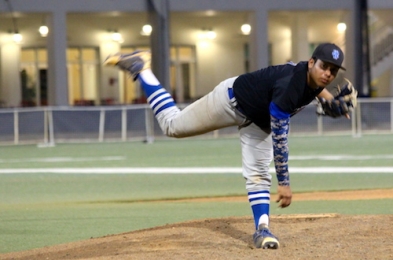 Kenneth Prado delivers during the 3A-15 championship

Even with two victories over the Westwood Christian Warriors during the regular season, the Sagemont Lions weren’t taking anything for granted in Thursday’s 3A-15 championship.

The Lions captured the title with a 9-2 victory as they came into the game on their toes after a message from their manager.

“Even though we beat them twice if we would’ve faced Hialeah, who beat us twice, imagine how we were going to go into that game and try to fight until the end,” Lions Manager Wesley Morejon said. “I told them they’re going to do the same thing against us, so we can’t overlook them.”

The Warriors came out with a plan and were the first to score, trying to set the tone for the game. They opened up the scoring in the first inning capitalizing on some miscues from the Lions defense. Brandon Nayor scored after an attempt for a double play resulted in an errant throw. Senior starting pitcher Edgar Abreu recovered and retired the next two batters to leave the damage at a minimum.

Abreu went the distance for Sagemont and pitched a solid game to position the Lions for the victory. Abreu pitched six innings, scattering six hits, three walks and a strikeout, allowing two runs.

“I was just trying to go out there and throw strikes,” Abreu said. “My teammates did all the work they needed to, I just trusted them and threw the ball down the plate.”

Abreu said the Lions’ previous success had nothing to do with his mindset coming into the district final, saying that at this time of year anything can happen.

It didn’t take long for the Lions to strike back, coming alive in the second inning. The Lions were patient at the plate and capitalized on a fielding error that led to a three-run third inning. Stefan Revelo and Edison Rodriguez led off the second inning with back-to-back walks, and an attempted sacrifice bunt led to a throwing error, leaving the bases loaded with no outs. Abreu took a shot at helping his own cause by putting the ball in play, hoping to bring in a run, but the lead runner was thrown out at home plate with the force out.

The Lions made sure they took advantage of the opportunity to put themselves on the board, and they followed with three straight scoring plays. Chris Malahias drove in Rodriguez with an RBI single to tie the game. The Lions took the lead on a hit-by-pitch to David Velez, scoring Vasquez, and Chris Iacono scored Abreu on a fielder’s choice.

The Warriors chipped away at the Lions’ lead in the third on a single by catcher Matt Fernandez, scoring Brandon Nayor again and making the game 3-2.

But it was all Lions from that point on.

During the fifth, the Lions came back alive, adding two more runs to go up 5-2. Chris and Sean Iacono combined for a run when Chris walked and stole second base, and Sean knocked him in with a single. Senior Brynn Martinez added the second run of the inning and a single up the middle to score Iacono. 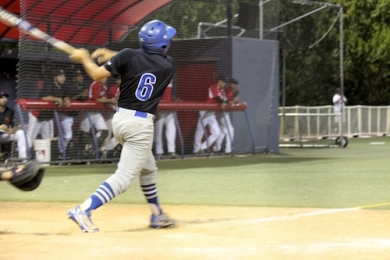 Alex Mejia connects on a single.

Not even an injury could keep Martinez out of this final as he contributed to his team as a designated hitter.

“I was trying to do what I know I can do at the percentage I am,” said Martinez. “To just help the team get runs, get base runners base to base and just try to make things happen.”

The Warriors kept fight but with no result as they weren’t able to capitalize on base runners in scoring position. The Warriors left five men on base in the sixth and seventh innings combined. One big reason was the Lions’ defense in the tight moments. With the bases loaded and no outs, Alex Mejia hit a solid line drive that looked to be headed to the left-filed corner. Andres Vasquez had a different idea. Vasquez timed the line drive perfectly, caught it and recovered fast enough to complete the double play at second base.

“I had just finished telling him move back,” said Morejon on Vasquez’s positioning. “There is no reason to be in. He just happen to move back at the right time, and he made the play.”

Stranded runners proved to be one of the hardships for the Warriors not being able to capitalize and put themselves in a better position to win.

“It wasn’t our day in that sense,” Warriors Manager Julio Andrade said. “It seemed like every time we had runners on base, we either hit a ball two feet from the fence or we hit a line drive right at them.”

The Lions sealed the deal during a four-run seventh inning. The Lions managed to work out four walks to Chris and Sean Iacono, Vasquez and Malahias, a hit-by-pitch to Martinez and an RBI single from Revelo to make the score 9-2 in their favor.

The Lions continue their march deeper into playoffs now focusing on regionals as the Warriors look to come back better and more experienced next year.

“This is a very young team,” said Andrade. “Most of these guys are eighth, ninth and tenth graders and I have two seniors. This team lost everybody when they won state title last year, so to be in the position where we were this season is a great achievement.”